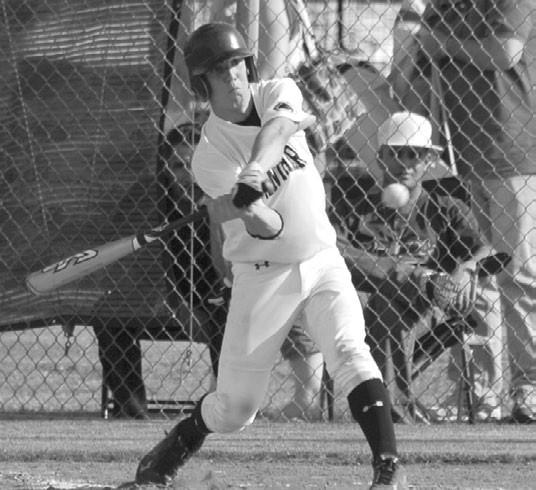 
Playing Falkville, a 2A Area 13 foe that they had already swept in two games, the Panthers didn’t ease up. Cleveland rode a dominant pitching performance to a 5- 0 victory in the first game and then cranked up the offense in a 13-7 blasting of the visitors in game two.

With the series sweep, Cleveland advances to the third round of the baseball playoffs for the first time in school history. Waiting in the quarterfinals is Lexington (27-16). Cleveland will travel to Lexington for a pair of games Friday beginning at 4:30 p.m. with a single game (if needed) scheduled for Saturday at 4 p.m.

Lexington advanced after needing three games to take care of Westminster Christian. The Bears dropped the first game 5-1 before coming back to defeat Westminster 1-0 and 5-4.

Lexington is coached by Ricky Putman and one of his assistants is Susan Moore graduate Randy Ratliff. Ratliff’s son, Kenny, is a junior pitcher/first baseman for the Bears.
Friday, April 24
at Cleveland

Panther junior right-hander Russell Silvers was the story in game one. He dominated the Blue Devils but it didn’t start out that way.


Falkville got three straight hits – two that didn’t leave the infield – to load the bases with one out in the top of the first. However, Silvers came back to get a strikeout and a weak ground ball to end what turned out to be the visitors’ most serious threat of the day.

The Panther offense came to life in the second inning against Falkville ace Trevor Mayer. Cleveland got a oneout single from Kyle Kester to ignite a three-run rally that included two more singles, a hit batter, and a big Falkville error.

Staked to a 3-0 lead, Silvers cruised. The junior changed speeds at will and kept the Blue Devils off-balance throughout the rest of the afternoon. Falkville only had four batters reach base from the second inning on and the Panther defense twice turned double plays to erase any threat.

Silvers closed in style by retiring the last seven men in a row.

The Panther offense provided him with a pair of insurance runs in the sixth inning. Tyler Robertson blasted a one-out double and came around to score when Kester followed with a single. Brock Cornelius followed with a single and Thomas Horton – running for Kester – later scored on a sacrifice fly off the bat of Jake Silver.

Silvers allowed just five hits (with three coming in the first inning) and hit a batter with no walks and two strikeouts. He improved to 7-1 on the year.

Cleveland improved to 23-12 with the win while Falkville dropped to 18-11. Cleveland 13, Falkville 7

After being shut out in game one, the Blue Devils came out swinging in game two against Cleveland’s Cody Horton. A pair of walks and a single produced a pair of runs in the bottom of the first.

Cleveland countered with a pair of runs in the bottom of the first when Hunter Tucker ripped a two-run double to score Brock Cornelius and Russell Silvers.

Falkville went back up 4-2 in the bottom of the second but Cleveland got a pair of runs in the third on singles from Adolfo Zavala and Tyler Robertson sandwiched around a double by Dusty Cornelius.

Cleveland got an RBI single from Robertson in the top of the fourth to take a 5-4 lead but the lead was shortlived after the Blue Devils scored twice in the bottom half of the inning.

The fifth inning proved to be the beginning of the end for the visitors. Cleveland sent eight men to the plate and used four hits, a walk, and a fielder’s choice to score four runs. Justin Thompson (RBI double), Adolfo Zavala (tworun double), and Dusty Cornelius (RBI single) provided the big blows.

Tyler Robertson had entered the game in relief of Horton in the fourth inning and he surrendered a run in the fifth to make it a 9-7 game.

The Panther offense added two more runs in the sixth after Kyle Kester led off with a double. Two outs later, he came around to score on a single by Hunter Tucker. Three pitches later, Tucker scored from first on an RBI double off the bat of Justin Thompson.

Robertson limited the Blue Devils to just a pair of hits over the last two innings and then provided the final Panther runs of the night. With one out in the seventh, Robertson got a fastball from Blue Devil reliever Cody Kelsoe and ripped a line shot to left-center that cleared the fence by several feet to give the Panthers a 13-7 lead.

Falkville got the leadoff man aboard in the seventh but Robertson got a pair of fly balls to center and a ground ball to short to end the game.

Robertson got the win in relief of Horton. He gave up a run on six hits and struck out two in 3.1 innings of work.

Cleveland improved to 24-12 on the year while Falkville finished the year at 18-12.