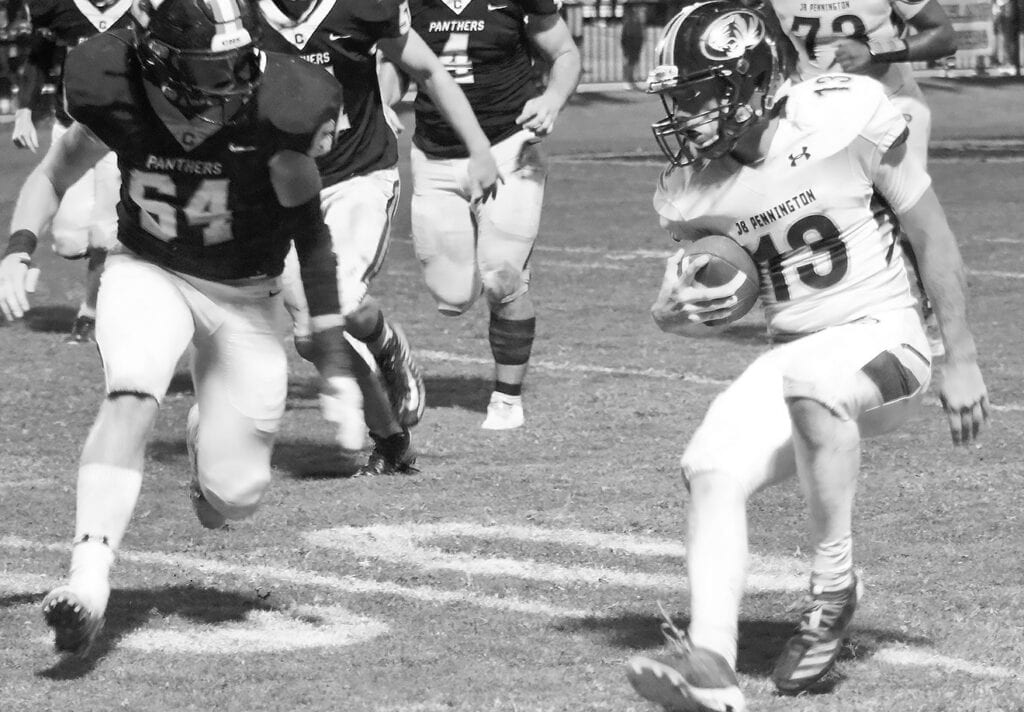 The Tiger and Panther rivalry has given their fans many thrilling contests over the years and Friday’s match up was another. Last year, J.B. Pennington held on for a two-point win. With Cleveland hosting, the Panthers were determined to protect their home turf. The teams traded scores for much of the game, which saw five lead changes, but with 3:10 left on the clock in the fourth quarter, the Panthers took the lead for good giving them a 38-28 win.

Logan Washburn got the Panthers on the scoreboard first with a 38-yard pass to Jacob Johnson, but a missed extra point left the score at 6-0. With 1:23 left in the first quarter, Pennington’s John Williams took off for 18 yards giving the Tigers their first points of the night. Jose Serrano’s kick was good giving Pennington the 7-6 lead. On the next drive, the Tigers couldn’t catch Pierce Gilliland who took the ball 61 yards for the Panthers’ second touchdown with only 0:36 left on the first quarter clock for a 12-7 lead.

On the Tigers’ first drive of the second quarter, Austin Wiggins ran the ball in from 1 yard scoring his and the Tigers’ second TD. Serrano’s kick put them back on top 14-12. But as the half was winding down, Washburn found Gilliland for 52 yards and a score giving the Panthers a halftime lead of 18-14.

It was all Tigers in the third. Matthew Frost took the opening kickoff 87 yards into the end zone. Serrano got the extra point and the Tigers were back on top 21-18. With just 0:13 left in the quarter, Hayden Floyd found Sawyer Heptinstall extending the lead to 28-18 after Serrano’s extra point.

The Panthers, though, clawed their way back. They scored the first of three fourth quarter touchdowns on Washburn’s 77 yard run with 7:29 on the clock to make it 24-28. The Panther defense stepped up forcing a turnover that quickly turned into 6 points on Washburn’s 21-yard pass to Skylar Self with 3:10 left in the game. Washburn’s 3-yard toss to Daquarrius Phillips for the two-point conversion put the Panthers on top 32-28. Cleveland added one final score on a 35-yard run from Phillips with 1:27 left. The Panthers held on for the 10 point 38-28 victory.

Kartar Adams and Gabriel Weems led the defensive charge with 14 tackles each. Gerardo Chavez had 10; Luis Saucedo had nine tackles; Johnson had eight along with an interception; Self, Kyle Willis and Jesus Elizzararaz finished the night with seven tackles each. Gilliland snagged the Panthers’ other interception.

Pennington was led by Floyd who completed 16-of-25 for 217 yards, one touchdown, and two interceptions. Williams rushed for 75 yards and a score; Floyd ran for 26 yards; Wiggins had 31 yards with a touchdown; and Matthew Frost finished with 14 yards. Heptinstall led the receiving corps with 81 yards and a touchdown. Jake Mardis had two receptions for 59 yards and Matthew Roberson had 49 yards.

With eight tackles (two for loss), Williams led the defense. Kyle Allred and Matthew Smith each recorded seven tackles. Smith also snagged one of the team’s two interceptions. Frost got the other.

Cleveland travels to Southeastern Friday for what should be another exciting game. The Tigers travel to Carbon Hill.