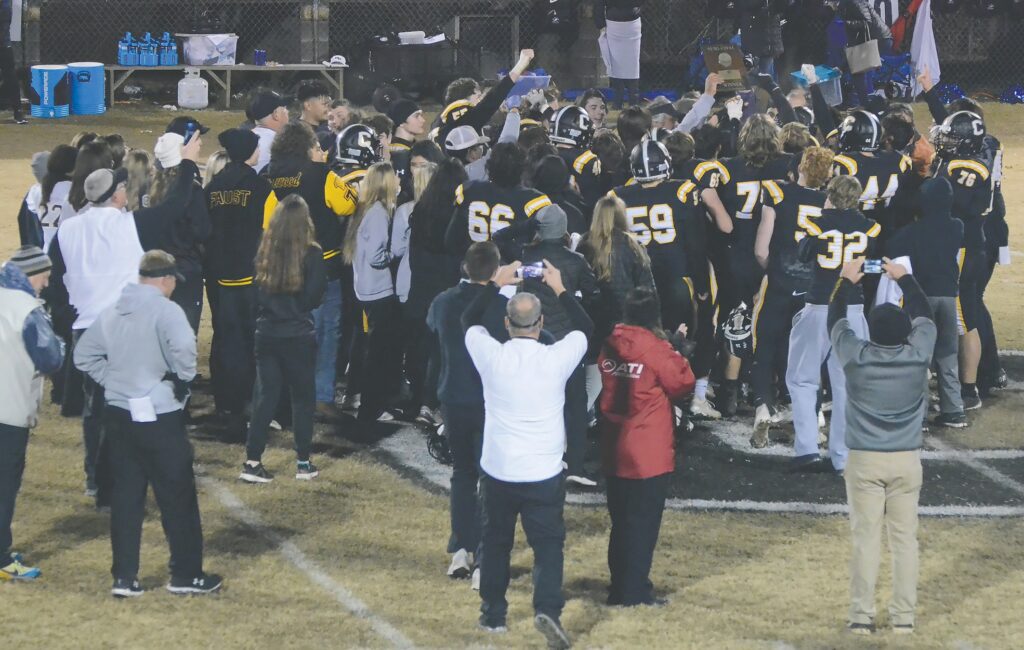 With their 21-14 win over Mars Hill last Friday, the Cleveland Panthers are headed to the school’s first ever football championship game. Until this year, the Panthers had never made it past the quarterfinals. Their Nov. 19 win over Southeastern put the team in the school’s history book while setting the stage for a semifinal game at home against Mars Hill – a team that has played in the last three 2A title games, winning two of them.

Both teams racked up more than 300 offensive yards. Cleveland finished with 311, which came from 65 passing yards and 246 rushing yards. Mars Hill totaled 305 yards, 110 passing and 195 rushing.

Mars Hill scored the first points of the game on a 14-yard completion with 6:01 left in the opening quarter. The Panthers answered with a touchdown of their own just three minutes later when Tyler Smith ran it in from the 7-yard line to tie the game at 7-7.

With the second quarter winding down, Mars Hill found the end zone one more time to retake the lead 14-7 with 4:47 left in the half. But, the Panthers weren’t done. At the 2:00 mark, a determined Smith fought his way into the end zone, scoring on a 3-yard run. Jeremy Acosta missed the extra point attempt leaving the Panthers down 13-14 heading into halftime. 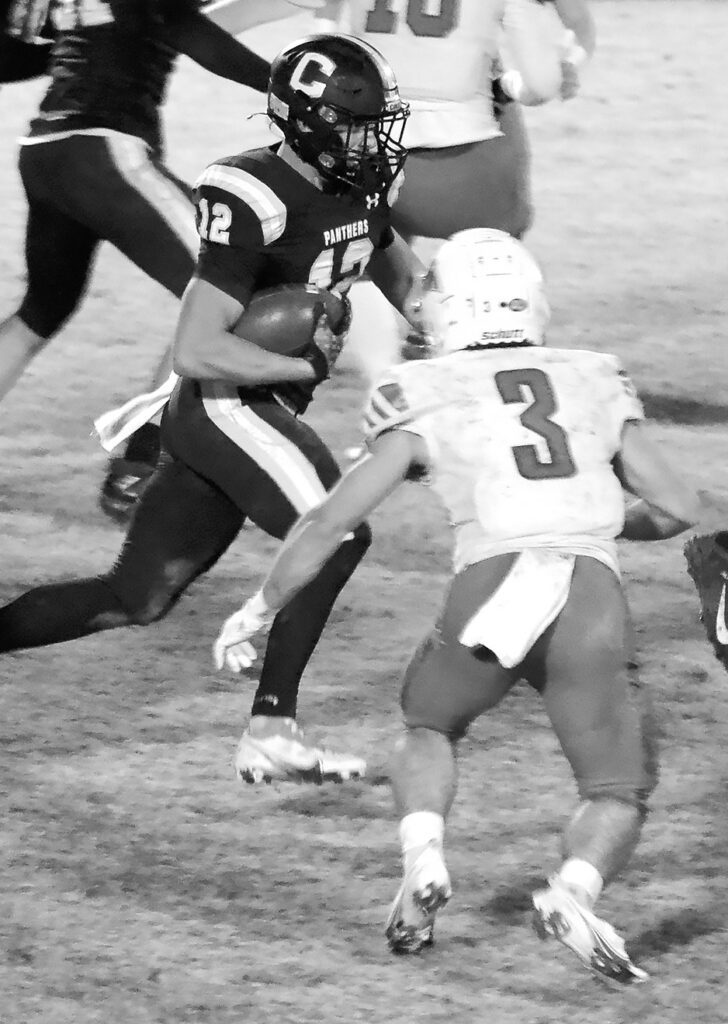 After the break, the Cleveland offense moved the ball down field before Smith rolled out of a tackle and into the end zone for the 33-yard TD, giving the Panthers their first lead of the game. Quarterback Logan Washburn converted the two-point play to give Cleveland a 21-14 advantage.

Cleveland’s defense did the rest. They made key stops to keep Mars Hill out of the end zone, shutting them out in the second half. “The defense really, really stepped up in the second half,” Cleveland Coach Gardner Gilliland said. “They threatened a couple of times, and our defense shut them down. I couldn’t be prouder of the way the whole team played.”

With five minutes left in the game, the defense put the ball in the hands of the offense to close out the game. They kept the drive alive and ran out the clock. 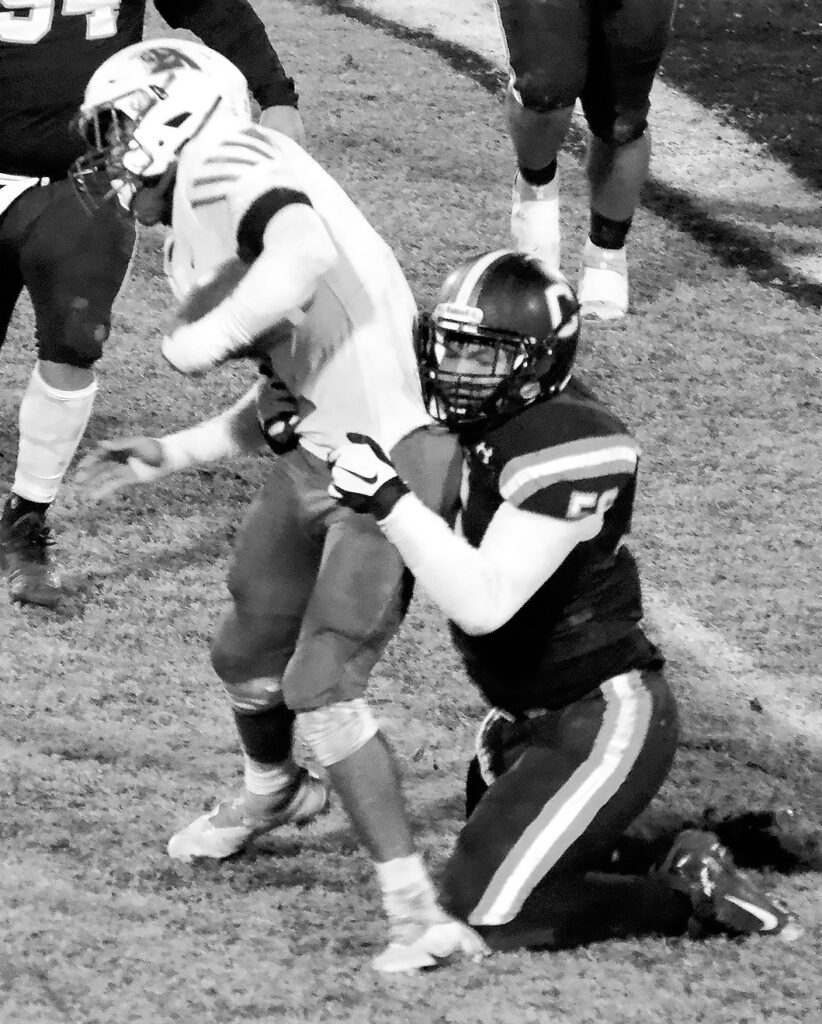 “When we got to the point of kneeling, it was an amazing feeling for all of us,” Gilliland added.

Smith finished the game with 145 rushing yards on 24 carries, scoring all three touchdowns. Washburn completed 8-of-11 for 65 yards. He ran for another 90 yards on 13 carries.

Karter Adams led the Panther defense with 11 tackles while Noe Hernandez and Will Corder finished with nine; Gerardo Chavez and Jacob Johnson had eight; and Brody Gibson and Luis Saucedo had seven. Gibson recovered a Mars Hill fumble and added a couple of sacks while Adams and Saucedo each collected one.

“I couldn’t be prouder of them. That last drive was something else. The offense got the ball back with five minutes left in the game. They converted three first downs, and, with the clock approaching one minute, they were finally able to get into victory formation. When they lined up in that formation, there was excitement and relief all at once. It was honestly so surreal. Still is. It’s just such an amazing feeling. 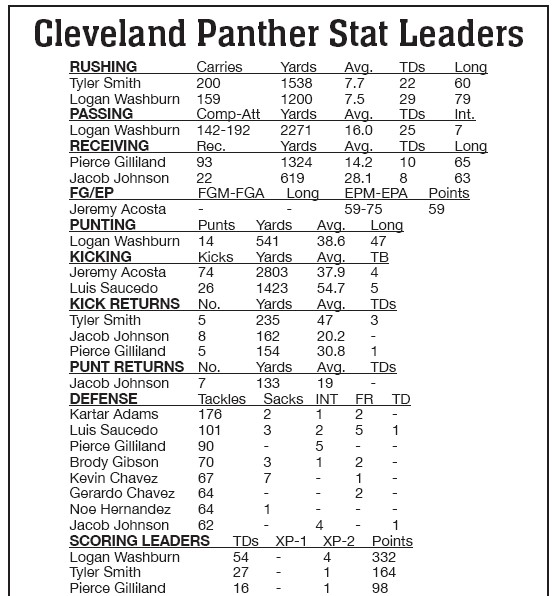 “Mars Hill is as well-coached as any team we played all season. They’ve been in the finals the last three years and won two of those three games. For us to go out there and play with them for four quarters and to come away with a win says a lot about our players, their determination, their drive.

“We knew last spring that this team had the potential to be good. We knew we had a special team. But we had no idea how good. It’s been a fun season. The energy around the school and the town has been electric. I’m happy for these kids, our school, our town. It’s hard to put it all into words. I just want these guys to savor every moment of this week.” The matchup

Senior players and cheerleaders and Coach Gardner Gilliland are all smiles after the Panthers’ semifinal victory over Mars Hill. -Cheryl Chastain

While Clarke County is making its first trip to the championship round, their head coach, Stacy Luker, has been there before. He is one of a few coaches in AHSAA history to win five or more state titles, having led Sweet Water to five 1A titles from 2004 to 2010. Last Friday against Highland Home, the Bulldogs scored the game’s final 21 points.

“They are a very athletic, a very aggressive team. Coach Luker has won a pile of titles and he will have them ready. We know that. But our guys are ready and they have worked hard to get to this moment. They know the work and effort it takes each week to get to this point. They believe in each other and they believe they can compete with the big boys across the state.” 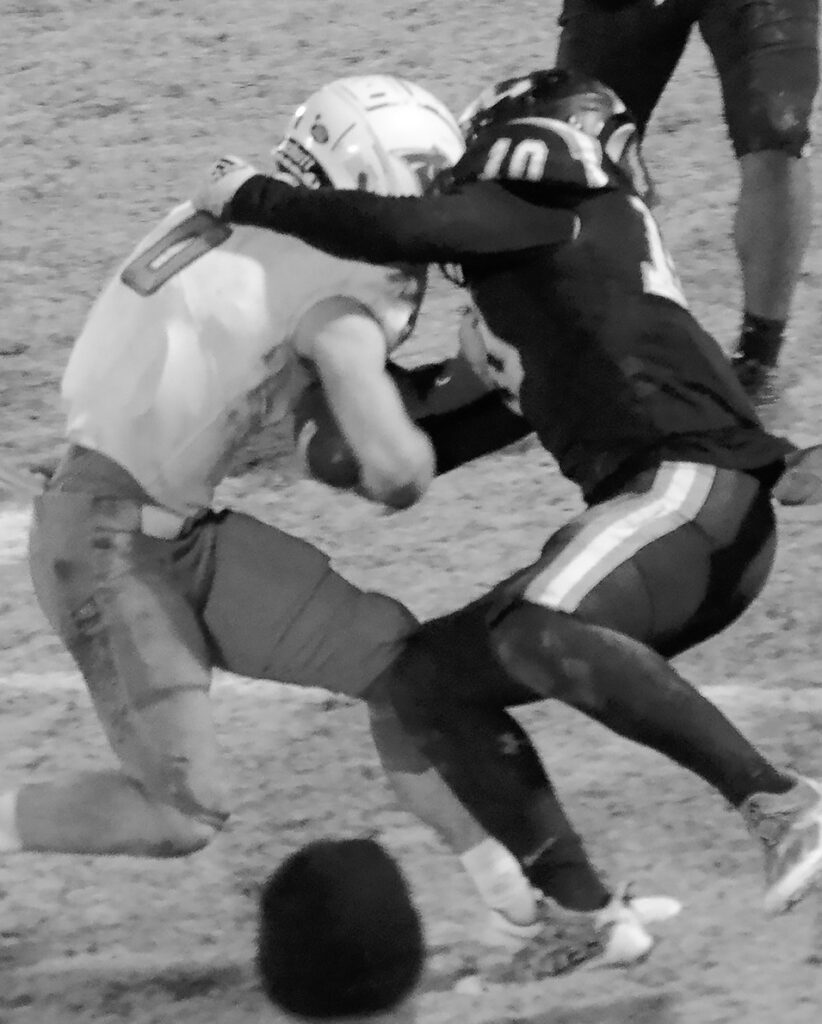 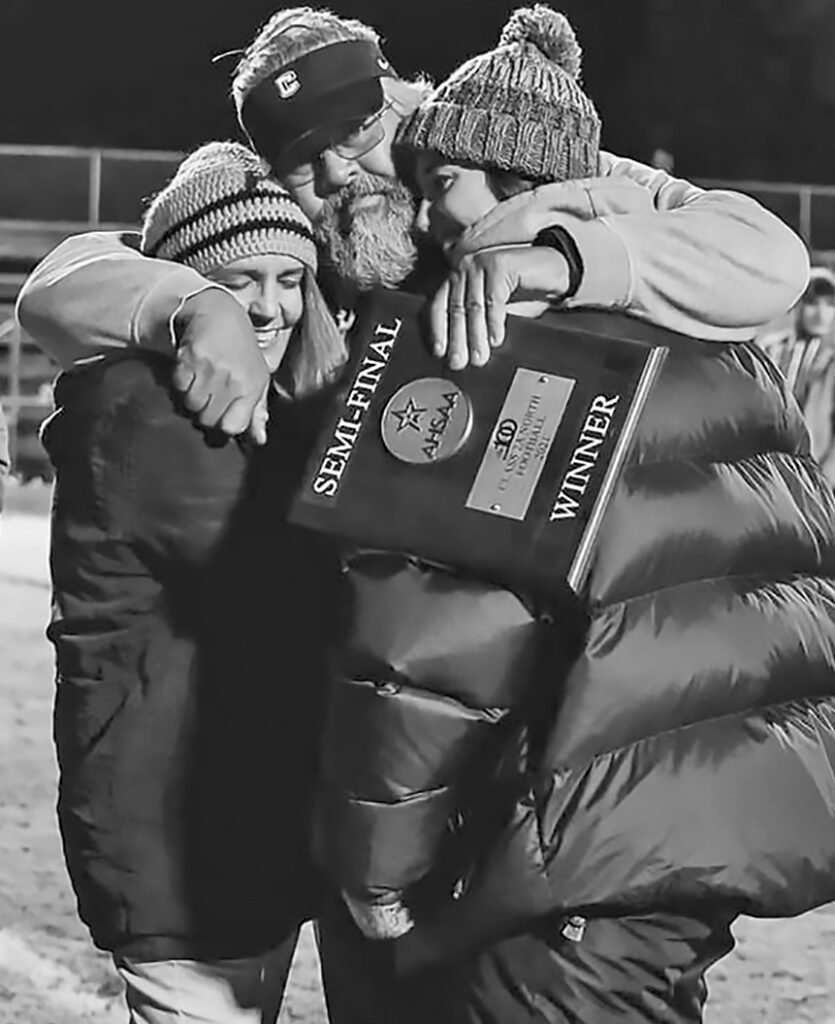 Coach Gardner Gilliland gets a big hug from wife Stephanie and daughter-in-law Carsyn-Marie Gilliland. -Fox and the Hound Photography 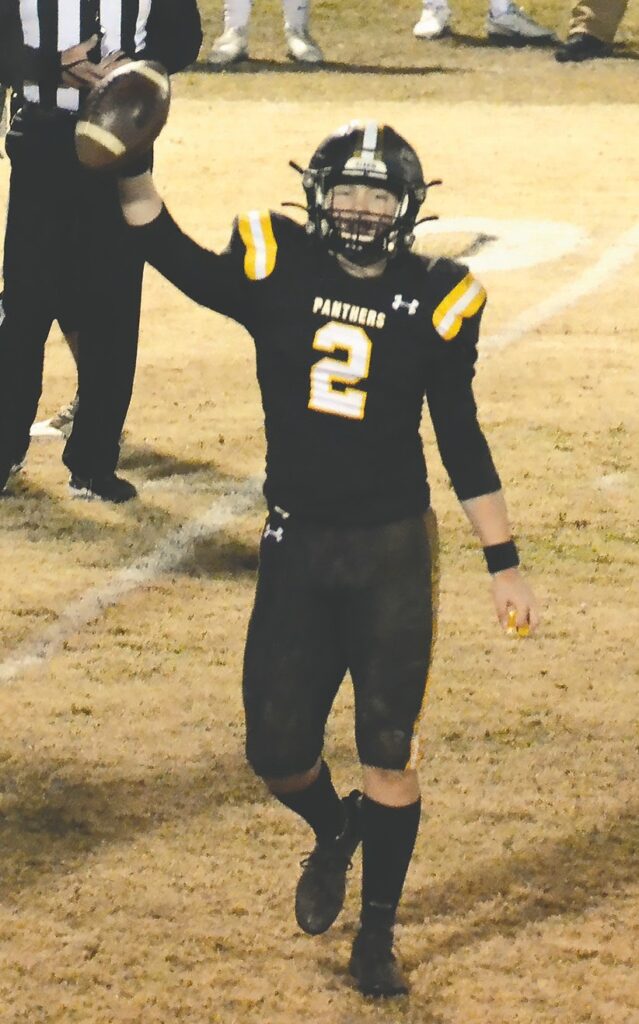 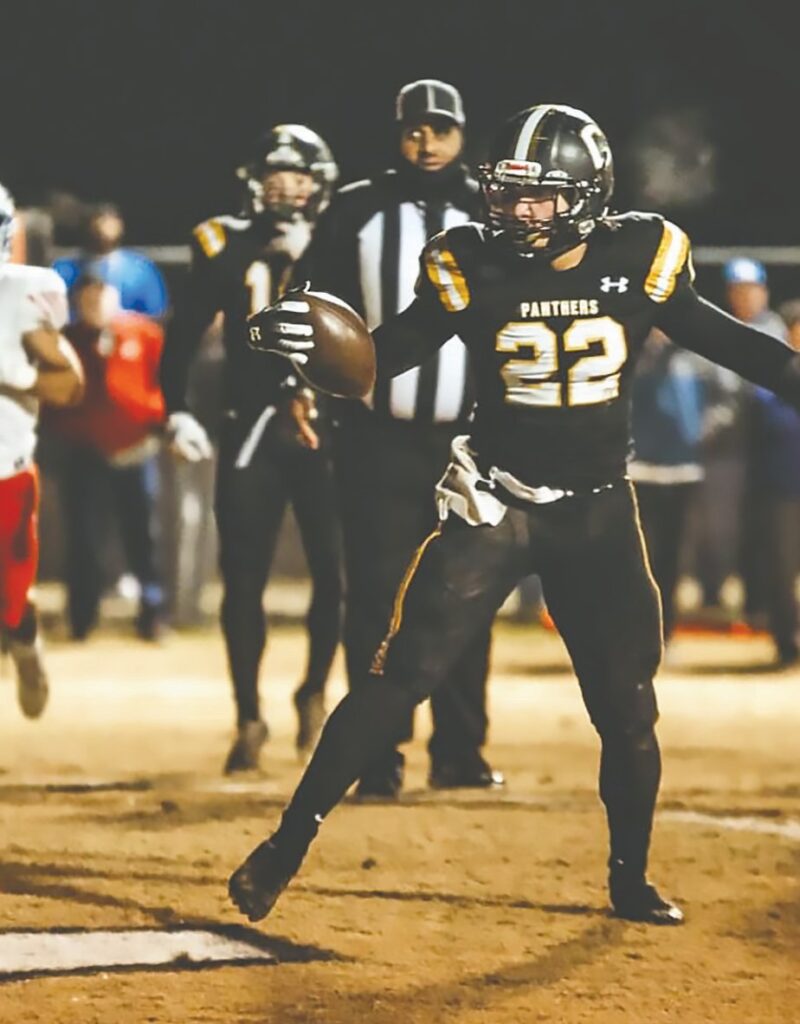