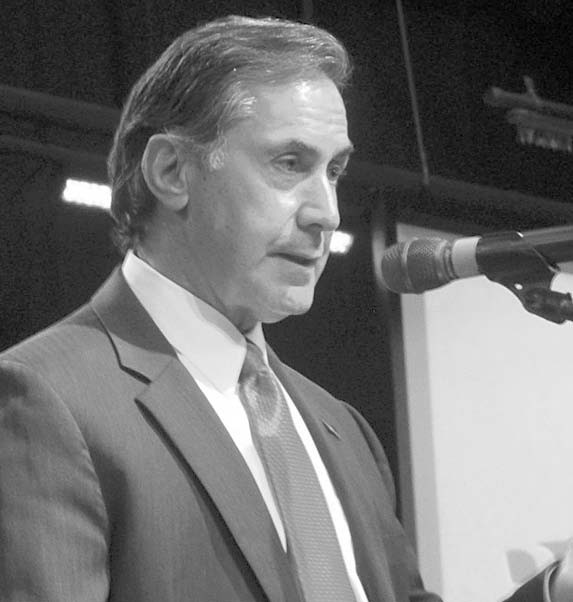 Sixth District U. S. Rep. Gary Palmer faced a much calmer and more courteous crowd at his luncheon meeting in Oneonta Tuesday than many of his House colleagues have faced in their districts in recent weeks. He reported on the status of a number of current issues, then transitioned to more subjective matters in the closing minutes of his talk. Issues included the so-far unsuccessful efforts by Congress to repeal and replace the Affordable Care Act. ‘We were on the right path to health care reform’… but … ‘the opportunity was denied us by one vote’ he said, referring to Sen. John McCain’s vote against the ‘skinny repeal’ bill in the Senate. ‘I’m hoping we’ll have another shot at it,’ he said. Other upcoming priorities: tax reform (‘we haven’t done that in 31 years’) where the objective is to cut the corporate tax rate in half, eliminate loopholes, simplify the code, and increase predictability, he said. Regulatory reform is next in line, with Palmer’s aim to eliminate all regulations that are obsolete, duplicative, and/or contradictory. Other subjects were addressed in response to audience questions.

The transition question: ‘What’s the most encouraging thing he’s found in his years in D.C.?’ he was asked. ‘The number of members who are strong (Christian) believers,’ he answered. He said members are among the smartest people in the world with world-class skills in many different disciplines. But that makes them very competitive in any discussion involving expertise. ‘Where I’ve connected with them is on the character and faith side,’ he said, explaining that a number of members meet each morning for Bible study. He said he himself has ‘a running conversation with the Lord’ on spiritual matters related to issues with which he deals. Bipartisan breakthrough?

In an inspirational answer to a young high school audience member, he concluded that only in this county can a person rise from humble beginnings in a home with an outhouse, to a home in the White House. But, he said, each has to take responsibility for his/her own participation in that dream. ‘It’s your world. You live in it. You inherit it. You must make it better,’ he said.

The event, hosted by the Blount County-Oneonta Chamber of Commerce, was sponsored by the law firm of King, Green, and Dobson.