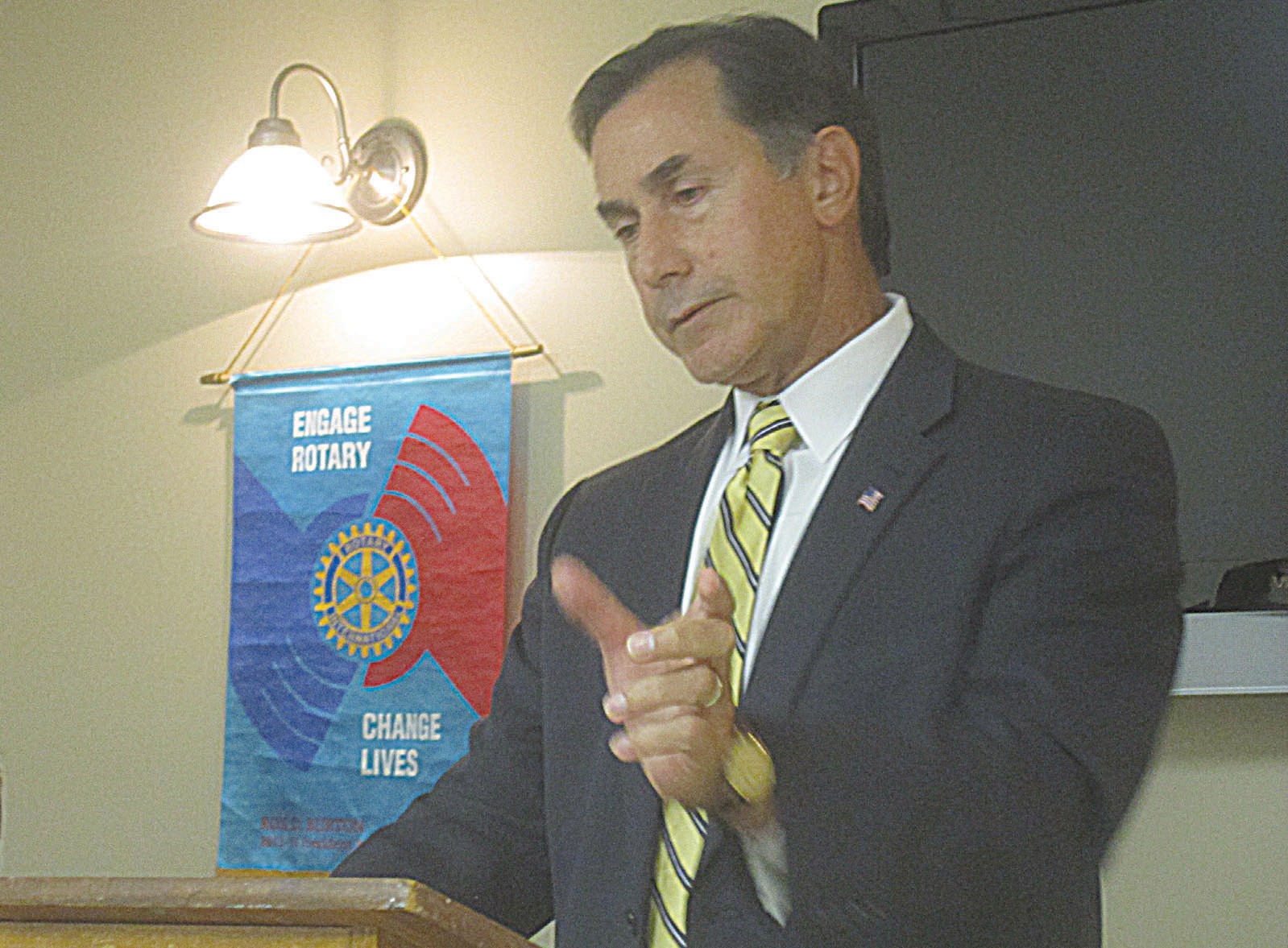 Palmer finished a distant second to Rep. Paul Demarco in the Republican primary in June, then soundly trounced him 64 percent to 36 percent in the July runoff. Palmer discussed his views on “how things work in Washington” and touched on the upcoming general election against Democratic opponent Mark Lester, who he referred to as a “fairly legitimate candidate,” though Lester is a late-in-the-season replacement for Avery Vise, who dropped out of the race recently.

Of interest to Blount Countians, Palmer reiterated his intention to open a congressional office here, saying it would be manned “two days a week every other week.” He said he will not move his family to Washington D. C., but will commute home every weekend in order to meet with and remain close to constituents. Other highlights of his talk

Referring to his own party, Palmer said, “We have become masters at depressing people.” Adding that the party is known more for what it opposes than what it favors, he said,“We have no one to blame but ourselves for not articulating a compelling vision for the country.”

He returned briefly to his campaign theme of repealing Obamacare and again estimated it would take three or four years to achieve. He said it would require not only winning the Senate but perhaps the Presidency as well. He discussed replacing Obamacare with the Republican vision of a viable health care plan, which involves enabling citizens to establish private plans, which he said would be much less costly to administer than the plan embodied in Obamacare.

He discussed his vision of solving the energy problem and contributing immeasurably to job creation at the same time by tapping the Green River Formation in the western U. S., which he says contains 3 billion barrels of recoverable oil and 340 trillion cubic feet of natural gas reserves.

He sees royalties from this national effort as key to addressing two other major national problems: deteriorating national infrastructure and maintaining viability of Social Security financing.

Telling educators in the room that he might lose them on his next point, he said the federal Department of Education should be substantially downsized, though not necessarily abolished in order to return academic and administrative responsibility for schools to the local level.

He said it is necessary to get the “cart out of the ditch” with respect to federal financial management, especially to eliminate out-of-control spending. His prescription for doing that: (1) stop deficit spending, (2) eliminate all spending that is duplicative or not the proper function of federal government, and (3) devolve functions performed at both the federal and state to the state for handling, and support them if necessary by block grant-type assistance. Constitutional crisis

He said he views what is happening with the influx into the U.S. of unaccompanied children from Central American countries as a constitutional crisis. As a solution, he suggested cutting off visas and foreign aid to the countries of origin in order to give them incentive to repatriate the children and to take effective action to prevent their undertaking the dangerous journey to the border in the first place.

Palmer said the U. S. may be “on the verge of a major war” in the Middle East, and blamed Obama’s “dysfunctional” foreign policy. He added that he can conceive of the U.S. and Russia becoming allies in order to take on ISIS, the Islamic State in Iraq and Syria.

“ISIS is the worst of the worst,” he said.“They’re recruiting European radicals who have visas and can come to the U.S.” While some estimates are much lower, he said ISIS could have an army as big as 100,000, and could become an issue for 100 years.

Discussing plans to build a new Veterans Administration hospital in Birmingham, Palmer decried the apparent planning failure to consider renovating the complex being vacated by Trinity Medical Center on Montclair Road. The accompanying professional building could have been renovated to provide hotel accommodations for families of veterans admitted for treatment, and the entire project completed at considerably less cost than the current plan, he said. Harkening back to his training as an engineer, Palmer said,“There’s no substitute for thinking. They used to say in engineering school ‘If you plan for nothing, that’s exactly what you’ll get.’ There’s just no substitute for thinking.”