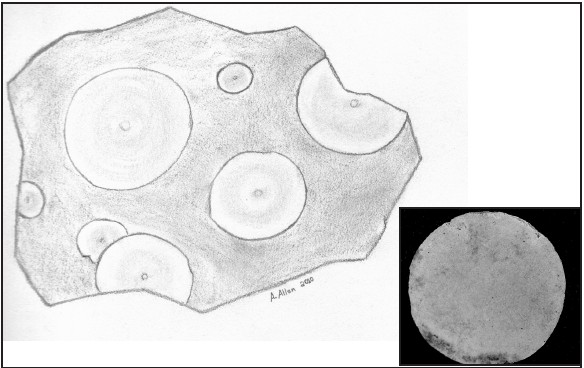 It was only a matter of time before featuring this fossil in a Paleo Profile. Plants, animals, and even photosynthesizing relatives of bacteria have been featured in Paleo Profiles. That makes three of the five kingdoms of life. Technically, there are six kingdoms of life now – but who really wants to separate Eubacteria from Archaebacteria?


I recently had a chance to visit a site in Washington County, near St. Stephens. St. Stephens is a special place for both historic and paleontological reasons. From the 1790s to the 1820s, St. Stephens served as a Spanish fort, an American fort and trading post, and the capital of territorial Alabama. By the end of the second decade of the 19th century, the transfer of the territorial capital to Cahawba, the development of shallow draft boats that could cross the shoals farther upstream, and yellow fever spelled the end for Alabama’s first territorial capital.

Though the political potency of St. Stephens faded before Alabama even reached statehood, the paleontological significance of this site endured. There are several exposures at or near St. Stephens that date back to the Eocene (55-34 million years ago) and Oligocene (24-34 mya) Epochs of the Tertiary Period of the Cenozoic Era. The feature of this Paleo Profile – Lepidocyclina mantelli
– is found in the upper formations of Lower Oligocene age in the Marianna limestone.

Lepidocyclina mantelli
is a foraminifera. Forams, as they are often called by paleontologists and biologists, belong to the Kingdom Protista. This means that they are unicellular. Being unicellular means that the entire organism is made of a single living cell. We are multicellular, meaning that our bodies are made of many cells, trillions in fact. Protozoa in the fossil record are not uncommon, but are usually overlooked because of their small size. It is rare that a single-celled species reaches such colossal size.

The test, or “shell,” of most foraminifera is made of calcium carbonate. They often have many chambers and openings that allow the cytoplasm, the soft, living part of the cell, to flow through. As foraminifera die, their tests constantly rain down to the ocean floor where they become part of the sediment. Over time, they are buried, lithified (turned to stone), and become part of the fossil record. Because of their continuous build up and large quantities, a very complete record of evolutionary change in foraminifera over time exists back to the Jurassic Period of the Mesozoic Era. The unusual completeness of this part of the fossil record allows scientists to study and document evolutionary processes and interspecies relationships.

Detailed study of these unicellular wonders can also give us clues about the environment in which they lived. There are two very important reasons to study paleo-environments using foraminifera. First, they can be used to study climatic change over time. A better understanding of how the Earth has changed over time can help us to better understand how the Earth is changing today and to better assess our role in that change. Second, the environment of past oceans has a direct impact on where oil reserves are located. A proper interpretation of how marine environments have changed over time and space helps us to better locate deposits of fossil fuels that still supply much of our energy needs.

My interest in Lepidocyclina mantelli
is simple. This foraminifera provides me with samples of a fossil protozoa which I don’t need a microscope to study. It can be easily found by even the most casual fossil hunter and is hard to mistake for anything else.When I hold a Lepidocylina
mantelli
in my hand, it still impresses me that this beautifully preserved 25-million year-old fossil represents the remains of a creature that was made entirely of one cell!

My question for this Paleo Profile is, “Limestone composed almost completely of nummulitic benthic foraminifera was used to construct what well-known architectural wonders of ancient Egypt?” These foraminifera are very similar to Lepidocyclina mantelli
in Alabama. Be one of the first five to call curator Amy Rhudy at the Blount County Memorial Museum at 625-6905 with the correct answer to win a Lepidocyclina mantelli.