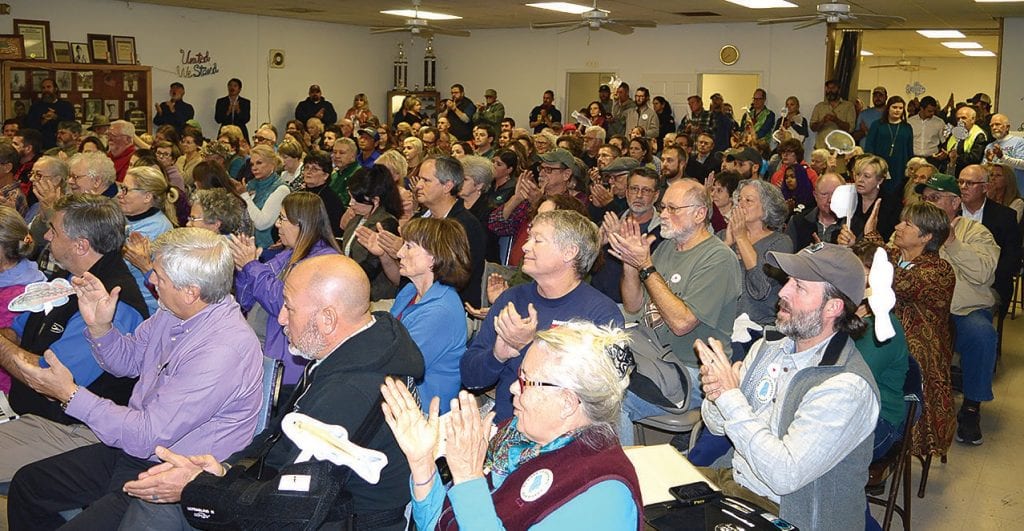 A standing-room-only crowd of about 175 packed American Legion Post 129 in Blountsville last Tuesday (above) for a public hearing about a pending permit application/renewal from Tyson Food’s Blountville plant. Estimates vary about the overall number of people who attended because several had to stand outside once the room filled, but it was a significant turnout.

The application currently before ADEM asks permission for Tyson to move the discharge point of treated wastewater produced by the plant from its current location on Graves Creek to a point directly into the Locust Fork River upstream from the new King’s Bend Scenic Overlook in Cleveland. In August, the company notified ADEM that it has abandoned the plan to move the discharge point, but the application remains as originally written for now.

The public was invited to make comments to ADEM’s committee of four about the permit and its implications; however, the format did not allow committee members to respond. ADEM’s Chief of External Affairs Lynn Battle explained ADEM will consider all the comments before rendering a final decision on the permit.

Rodney Haynes, Tyson representative on hand, spoke first and said that since requesting the change to move the discharge point to the river, company officials had spoken with local officials and residents. Because of the public’s concern, the company has abandoned that plan. “Therefore, Tyson expects that when a permit is issued… there will not be a discharge into the Locust Fork.” He also said the company has no plans to expand the plant and the construction that can be seen is merely upgrades “necessary to effectively treat and efficiently treat our wastewater to meet the permit limits.” Haynes finished by saying, “Tyson is committed to being a good corporate citizen.”

After Haynes, 34 people took the microphone and voiced their thoughts. They ranged from land owners, kayakers, scientists, a high school student, and people who identified themselves as lovers of nature and the river. Most were Blount Countians, but some were from other counties, and at least one person who spoke came from Tennessee.

All but a couple of speakers directed most of their comments to the standards set by ADEM. Their concerns could best be summed up in the words of John Kinney, staff scientist at Black Warrior Riverkeeper. He said Tyson representatives have said, “they would meet the limits set by ADEM. So, it’s incumbent upon ADEM to set stronger limits more protective of water quality.” He went on to say, “It is within ADEM’s power to write stronger guidelines to reduce bacteria and nitrogen.” Kinney offered as example a Tyson plant in Virginia where the company must perform better in terms of bacteria and nitrogen levels that are discharged because the regulatory agencies in Virginia demand it.

Stephen Guesman, president of Friends of the Locust Fork River, said his members “applaud Tyson’s decision to abandon plans of installing a discharge point directly in the river and trust that ADEM will comply with Tyson’s request.” He also spoke of the Tyson’s Glenn Allen, Va., plant and said it “discharges less than 4 percent as much nitrogen per day as the Blountsville plant.” Guesman acknowledged the plants may not be completely analogous, but “the vast difference in those two numbers indicates that our local streams stand to benefit from the technological treatment capabilities Tyson has exhibited in other states.”

Dr. Betsy Dobbins, biologist and teacher at Samford University, told the committee she has been taking students to Graves Creek “off and on” for four years and noted, in terms of nitrogen discharges, there is “significant evidence” of how the company’s discharge negatively affects Graves Creek and subsequently the Locust Fork River. She was one of three biologists who spoke about the importance of more stringent regulations as a way to improve water quality for the river.

Chris Green, Blount County Commission chairman, addressed the panel after several speakers erroneously said no elected officials were present. Besides Green, also present were county commissioner Mike Painter, county administrator John Bullard, and Blountsville mayor Mike Glass. Green noted that as the county’s largest private employer, Tyson Foods is important, as is the river and the environment. “We have to find a way we can address the concerns and issues of all involved.”

According to the ADEM spokesperson, there is no deadline for action on the permit. The public comment period ended the day after the hearing. To view the permit application, go to www.adem. state.al.us/newsEvents/notices/jun19/npdes/6tyson.pdf.