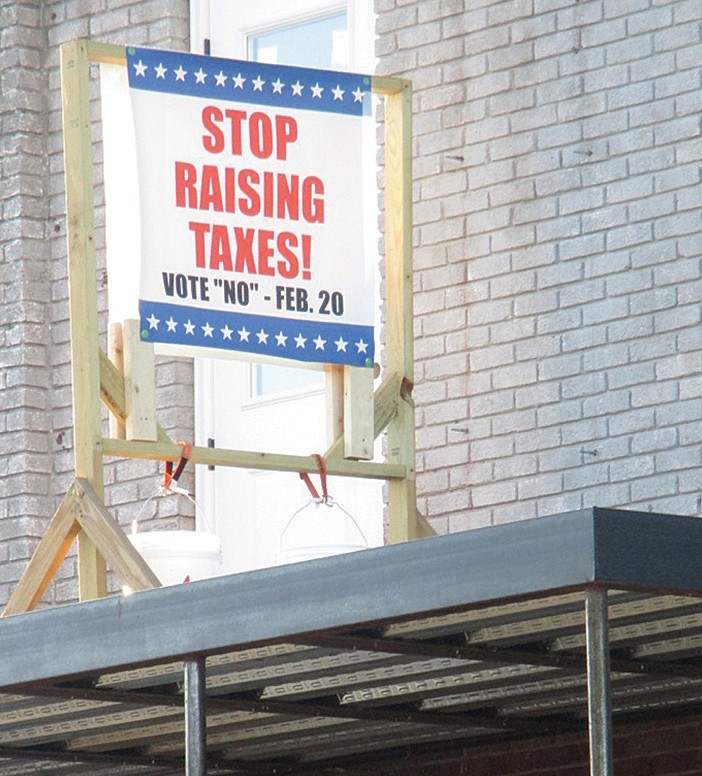 Opposition arguments to a proposed 9-mil property tax increase to support K-12 education at Oneonta City Schools are detailed and comprehensive, ranging from the magnitude of the proposed property tax increase to matters of school need, planning, and operations. But the main thrust of the their case is that the proposed program to meet school needs could be financed in other ways, without resorting to laying the full burden on taxpayers of the city.

Citizens of Oneonta will vote Feb. 20 to grant or deny the property tax increase request. A similar 5-mil request failed by one vote to pass in a referendum in 2013.

The increase will raise about $630,000 annually, impacting residences and businesses in a range from less than $100 annually for lower-valued residences, to several thousand dollars annually for higher-valued businesses, depending on the appraised value of the property.

A number of business owners in the city have coalesced into a loosely-organized group to oppose the increase, informally led by Wayne Bynum owner of Blount Office Supplies and Equipment, according to local businessman Ricky Cleveland, whose own reasons for opposing the increase are summarized later in this article.

“All the businesses in town are opposed to this thing,” Bynum said. “If you figure how much we’re taxed already, we’re paying through the nose now. This amounts to a 20 percent tax increase on businesses. I pay over $10,000 annually in taxes now. This will raise it to somewhere between $1,500 and $1,800. I’m not for raising taxes on anything.”

Below are responses from opponents contacted to express their reasons for opposing the tax increase proposal. Others contacted for comment did not respond.

Sharp’s response was detailed and comprehensive. A number of his points are condensed and summarized here.

• Only business owners who live within city limits can vote on the referendum; that leaves many who would be affected unable to vote, constituting taxation without representation.

• The increase will have a negative affect on business growth.

• Many, if not most, businesses will pass the increase on to their customers, clients, patients, etc., creating a hardship for many.

• Business taxpayers will pay not only a 20 percent increase in taxes, but higher prices for goods and services as well.

• Many residents are on a fixed income, and would be more affected than others by the increase.

• The 370-odd out-of-district students in Oneonta City Schools take about $2 million out of the county school system. Those dollars could be used to improve the county schools they are leaving.

• Out-of-district students contribute measurably to the overcrowding issues cited by the school board as one of the reasons they need additional revenue.

• Oneonta charges only about $300 per year for out of district students; Jefferson County charges much more ($1,500 per year); Oneonta school board members did not commit to a specific increase for out-of-district fees , though they did say they would decide how much to raise those fees after the tax is passed. (Multiple points combined). Sharp’s apparent point is that out-of-district fees should increase at least commensurately with the increase in the tax burden for Oneonta citizens.

• From the additional revenue from the tax, 85 percent will be spent on the band and athletic departments; band and athletics provide little to no job opportunities in Oneonta; focus of expenditures should be on increasing skills to prepare students for jobs available in Oneonta and Blount County. (Multiple points combined.)

• Oneonta doesn’t have the tax base or demographics of Mountain Brook or Vestavia; per capita income is much lower; it’s not reasonable to expect it should have state- of-the-art extracurricular facilities that rival the best in the state.

• The school board has $2 million to $3 million, maybe more, in capital reserves; their plans don’t indicate a willingness to use a portion of those reserves to help fund their capital projects.

Sharp stated the annual impact of the property tax increase would be $106 on his residence and a minimal amount on his business, which occupies leased space.

“As a career educator, I find myself in an awkward situation. I have always been, and continue to be, a strong proponent of public education. As a business owner with a unique perspective on education and funding, there are other means of funding and generating revenue than a property tax increase. Unfortunately, I do not even have the opportunity to vote on the issue because I do not live in the city limits of Oneonta. However, if I could vote, I would vote NO. I think other business owners find themselves in the same situation of not being able to vote on the issue.

“Raising the amount of taxes businesses pay is not an incentive for new businesses to come into the area. Existing businesses will have to decide if they can afford to cover the cost of the increase themselves or if they will have to pass it on to their customers.

“Being a provider of services to senior citizens, even a small increase could prevent someone from being able to afford assisted living. In Alabama, all assisted living costs are out of pocket to the resident. Insurance does not pay any part of the costs, so keeping resident costs down is important.

“Parents of students who do not live within the city limits, but choose to enroll in the Oneonta City School System, currently pay about one-fourth of what surrounding school systems charge for out-of-district fees. Increasing these fees seems to make more sense given that this is the primary reason additional classroom space is needed. The new classrooms would allow the approximately 370 out-of-district students attending to be served. The other desired additions are commendable, but why should people who receive no direct benefit be asked to shoulder the cost? A phased-in approach would provide time for the state to issue a building bond that would cost local city residents as well as local business owners less.”

Cleveland estimated the impact of the tax increase on his businesses at $5,000 to $6,000 annually.

Cleveland’s response to questions was thoughtful and wide-ranging, rendered below in narrative, quotations, and bullet point paraphrasing.

The first question to Cleveland had to do with the magnitude of the estimated impact of the tax increase on his business: $4,000 a year, he replied. But he had another lick he wanted to get in about the business impact: it doesn’t all start after the referendum, if it is approved. It’s already started.

“The point is, I’ve had two chances to buy property recently – 100 acres and a building lot that I normally would have bought,” he said. “But I haven’t – and won’t – until I find out what’s going to happen with this tax proposal.

“My biggest issue is the number of mom and pop businesses here – several of them valued in the $1 million to $2 million range – that are going to be affected. Some of them are competing head-to-head every day with the big box stores where every dollar means something, and this is a 20 percent tax increase. “

• Alternately, fees for out-of-district students could be raised from $350 per year to $1,000 per year – still well below the $1,500 charged by Jefferson County, for example – and $250,000 of additional revenue would be generated to apply to meeting the needs the school board identifies.

Cleveland said he wishes the board would do two things immediately in the interests of transparency.

(2) break down the costs of the $10 million proposal to meet the school’s needs by individual projects, not just by broad categories such as academics, arts, and athletics.

“I’m a supporter of band and athletics, but you have to manage the school like a business and that means you have to live within your means.

“This is not about not funding the school, but about how they’re spending the money. It’s about the time frame – meeting their needs all at once with $10 million of debt versus doing it one project at a time over a longer period of years, without borrowing the money. And I don’t believe there’s a strong correlation between amount of money spent and academic performance, either. “

“That’s a lot of money for this size town and this size school system,” he said.

On the new proposed baseball field: “They already have a baseball field, maintained jointly with the city. Why do they need another one?”

On the new proposed soccer complex: “The present field seems to work fine, but there’s other ways to build things other than by raising property taxes. Why pay $9 million in interest on debt? Do local fundraising campaigns and accrue money from capital funds in stages – and do one project at a time.” (Cleveland cited the Oneonta Steve Johnson Athletic Field House project. He said it was financed 80 percent by donations.)

“Does that mean that’s $6 million for the new band room in space that already exists, the new elementary gym, and moving the weight room?” he asked.

“I just can’t make those numbers add up,” he said.