Completing a bit longer than usual journey, Oneonta native Travis Sims graduated from the United States Naval Academy in Annapolis, Md., last month. The 24-year-old had a two-year delayed entry into the academy. Although Sen. Jeff Sessions and Congressman Robert Aderholt nominated Sims during high school for the academy, doctors concluded Sims did not meet the academy’s physical requirements.

For those who believe obstacles overcome define success as much as, if not more than, accomplishments, they would find Sims fits that mold. He has enjoyed considerable recognition and success, but some of that has come despite setbacks. 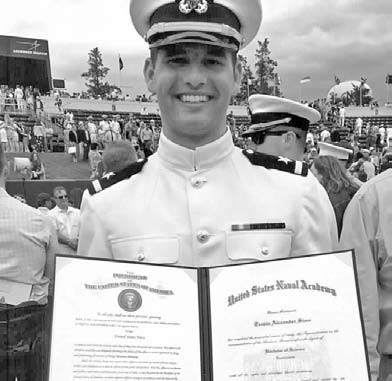 When the academy first denied his admission, Sims continued to prepare himself and press officials for reconsideration. Following a second denial, he still refused to take that as the final answer.

Eventually, doctors concluded as Sims had contended that he did not suffer from asthma. With that matter corrected, Sims left his studies after two years at The University of Alabama and headed for Annapolis. His father, Mark, recalls his own concerns over the move and his reassurance to his son that should he decide he wished to return to Alabama, that door remained opened. Sims would not be dissuaded.

At The University of Alabama, Sims appeared on the dean’s or president’s lists each of his four semesters, served as an Ambassador for the College of Engineering, and a resident advisor for Presidential Hall his second year there. Perhaps, that experience may have inspired his 11th Company classmates to select him company commander.

As a company commander, one of only 30 each semester among the 4,400 midshipmen, Sims led his men on field for the annual Army-Navy game with his name and hometown emblazoned on screen for the nationally televised event. Viewing that display, then county administrator Zac Marsh informed county officials who passed a resolution honoring Sims.

Ever the diplomat, Sims did not share, as his father did, of events in the wee hours prior to the big game. The elder Sims noted that he and his younger son Carter flew to the game and witnessed firsthand how his son addressed some issues with his men. A few got too rowdy at a bar and were placed in police custody. It was Sims who handled the problems and then faced the grilling by his immediate superior.

In response to interview questions, Sims shared briefly of his experiences during his time at the academy. He estimates the financial value of his four-year degree at Annapolis in excess of $200,000. That deals only with the regular academic years.

Beyond the classroom, Sims spent a month after his freshman year learning to sail a 44-foot sail boat, charting maps of the route, and, with nine other midshipmen, sailing it through stormy seas from Annapolis to Rockport, Mass. He speaks of the awesome reality he experienced on one of the nights of the 10-day sail when he had sole responsibility for the vessel and the lives of those aboard.

Of a second summer experience, he notes he spent 28 days in Paris, immersing himself in French culture while living with a family who would offer only limited help in English. That experience has given him empathy for non-English speakers living or traveling in the United States. Besides his travels in France, Sims has also spent time in England, Ireland, Israel, Italy and Spain.

Sims waxes almost poetic speaking of his hometown. Asked of its positives, he notes, “My roots are what kept me grounded. During (basic training), I was referred to as Forest Gump and the Alabama fan. My accent stuck out the most, but it also became my identity….

“Every time I . . . had my accent/hometown questioned, I always remembered where I was from and who I represented. I wasn’t so fazed by the fun-poking but took on a sense of pride having been from Oneonta.”

Asked to address any negatives he experienced related to his small-town origin, Sims advised, “I challenge every person in Oneonta to get out of Oneonta and experience more of the country and more of the world.” He proceeded to praise his parents for taking him, Carter, and their sister Morgan on road trips and expanding their horizons and perspectives.

As for what he misses of Oneonta, the soon to be San Diego-based ensign asserts, “The people.” He elaborates on the friendliness of the people of Oneonta and the sideways glances he often receives when greeting others on streets elsewhere.

Sims obtained a degree in economics and shared why he chose that field. He claimed he first developed that interest in high school. At Tuscaloosa, while preparing for an engineering degree, he took two semesters of economics. At Annapolis, he realized he would be taking still additional economic courses and decided to make that his major.

Seventeen Blount countians made the trip to Annapolis to attend Sims’s May 26 graduation. That number included his immediate family, both sets of grandparents — Sims and Whited, a great aunt and her husband, cousins, former teachers, and his uncle James, an Air Force Academy graduate, and James’s wife.

At San Diego, the Navy has assigned Sims to the USS New Orleans for an anticipated minimum two-year stint. He faces a required five-year commitment to the service and will then decide whether or not he wishes to extend that.

He ended his interview questions boldly, referring to the uncertainty of international events, “If I had to choose anyone to fight for my family, hometown, and country, I would choose me. So only time will tell. But, I also have aspirations in the political realm, maybe running for public office or entering the workforce in the field of finance. I choose to live in the moment and enjoy the blessings I have been given and let tomorrow worry about tomorrow.”