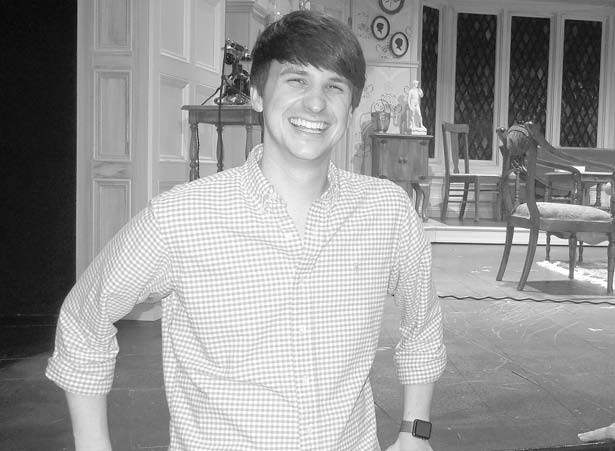 Standing in front of the Barter Theatre main stage, Barrett Guyton is proud of his work there.

Oneonta native Barrett Guyton began his sixth year with Abingdon, Virginia’s Barter Theatre in May. He labels work there as his “dream job.”

That dream entails acting, directing, and scheduling tours. After graduating from The University of Alabama with a double major in theatre and health care management, a concession to somewhat skeptical parents, Guyton had auditioned to join the acting company in Memphis.

He relates that after the 9:30 a.m. audition, he received a call back for midnight that night. Evidently, Guyton impressed the scout as she proceeded to offer him an acting slot with the company.

The 2007 Oneonta High School graduate’s present titles include associate director of the Barter Players and touring director. The titles slightly mislead since Guyton also appears in various productions, such as Officer Davis in this season’s performance of Footloose. He will direct five plays this season, quite an accomplishment for a 28 year-old.

As he speaks of his love for the job, Guyton elaborates that he now gets to teach actors and help them improve their craft. He also notes he touches future generations through the touring company which performs primarily at schools, pre-K through college, over the Southeast. A company made its way to Oneonta for two school performances in 2014 and 2105.

Guyton speaks passionately of the touring companies, his job in general, and how both help foster imagination and empathy as well as other valuable skills among youthful audiences. In addition to the school performances, the company, on occasion, may appear at retirement venues or other similar sites.

Guyton should have considerable knowledge of the locations, since his mother Kathy Loggins works as chief financial officer with the Oneonta City School system and his father, Lee Guyton, and stepdad, Roger Loggins, have worked in accounting with the present firm of Carr, Riggs, & Ingram, formerly Self, Maples, and Copeland of Oneonta. That firm specializes in nursing care facilities.

Guyton explains that the school appearances, in which he performed for two seasons, combine pre- and postshow student discussions along with the actual performances. Students have a chance to see the actors as both characters and ordinary people and ask questions of the troupe.

The tours run January through March, marking 133 performances of three different shows. The audiences number over 30,000. The rest of the year, Guyton works at the Abingdon location which boasts over 165,000 attendees yearly and a local estimated economic impact of over $37,000,000 a year.

Designated the State Theatre of Virginia in 1945, Barter began 12 years earlier as the idea of Robert Porterfield. Porterfield saw fellow starving actors in New York City and thought of the abundant food in his native southwest Virginia. He convinced them to travel to Abingdon and set up a theatre for paid or bartered admission.

The official theatre story claims that at the end of the first season, the company had $4.35 in cash profit and actors who had gained a combined total of over 300 pounds. Rather than the set 35-cent admission, patrons could barter the “equivalent in produce, meat, or live animals.”

Asked of his Oneonta experiences, Guyton speaks highly of what will always be his home. He has specific praise for Oneonta High School retired music and drama teacher Martha Burdette. Of Burdette, he notes, “she started it all for me. Without that opportunity, I wouldn’t have had any of this. It was harder to get that experience then.”

He also notes the role his piano teacher Charlotte Langner played in his life. While he says he no longer plays the instrument, he claims he uses what he learned there every day in his job. He explains that his healthcare management classes have allowed him to coordinate well his additional touring responsibilities.

In response to a question of how many Blount countians may have made their way to Abingdon, he professes uncertainty. He jokes that one day while walking the street, he surprisingly spied retired elementary teacher Jeanne Nelson. After shouting her name, he ironically recalled the theatre playbill that season included Miss Nelson Is Missing! Nelson and her husband, Mike, who had honeymooned there, occasionally return to enjoy one of their favorite spots.