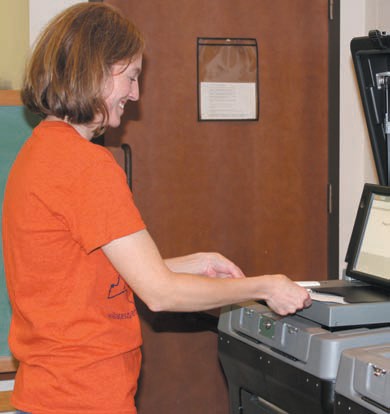 Last Friday, the city of Oneonta performed a public test of the electronic voting machines that will be used in the municipal election later this month. Oneonta will have two voting machines in use for the Aug. 23 election. This was pursuant to the Alabama Administrative Code, Rule 307-X-1-04. Brian Erwin and William Blythe brought the machines, set them up and explained how they worked. The electronic votes will also be counted on paper to make sure the electronic votes match the paper copies. The machines are quite advanced. If a voter accidently votes for two candidates or makes a scratch mark in a different candidate’s circle, the machine picks it up immediately, and it shows on the screen that you’ve over voted, and it will ask if you would like to review your ballot. It gives you the ballot back, you return it to one of the volunteers, and she will ‘spoil’ the ballot. Spoiling the ballot means tearing any part of the pattern on the left side of the ballot. After the ballot is spoiled, you will be given a new ballot to use and your first vote will not count in the electronic machine or on paper. Only four people showed up to place their test ballots to see how the machines work, and all of them were satisfied that it counted the votes correctly.