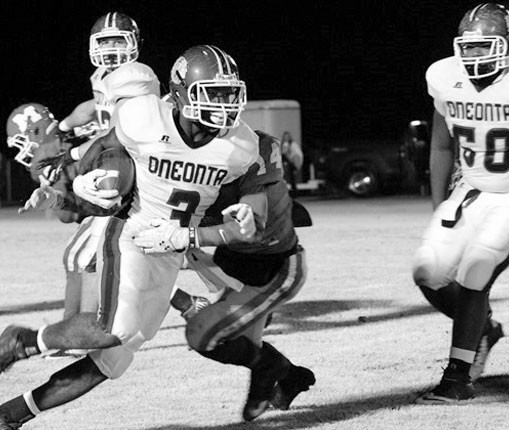 Avery Reid pulls away from a Munford defender.

The Oneonta Redskins held the powerful Munford Lion offense to just seven points in the second half and rolled to a 35-21 victory at Munford last Friday night. With the win, the Redskins advance to the 4A title game at Bryant- Denny Stadium in Tuscaloosa Friday morning.

The huge crowd had barely settled in when the Redskins got on the board.

On the fifth snap of the game, Ko Powell ran a keeper to the left side and scooted 50 yards for the touchdown. Tyler Short added the first of his five extra points on the night and the Redskins had an early 7-0 lead.

Two possessions later, Munford got on the board. Slippery senior quarterback Monteo Garrett got away from a pair of Redskin pass rushers and heaved the ball deep down the middle of the field. C.J. Chapman came down with the ball and raced into the end zone for a 47-yard touchdown. The extra point tied the score 7-7 with 4:46 left in the first quarter.

Oneonta answered. The Redskins moved 50 yards in a drive that took just two minutes. Powell flipped a screen pass to Keaton Jones and the senior scored from 15 yards out on the first play of the second quarter. Short’s kick gave the Redskins a 14-7 lead.

The Redskin defense forced a stop but the offense couldn’t convert and Munford came back down the field on an 81-yard drive that ended with Garrett firing a 6-yard touchdown pass to Earl Moss. The extra point tied the game 14- 14 with 5:36 to play in the first half.

That proved to be plenty of time for the Oneonta offense.

Powell had passes of 24 yards to Brock Latta and 38 yards to Trevor Smith as the Redskins went 80 yards on a drive that ended with Avery Reid scoring from a yard out. Short’s kick gave the Redskins a 21-14 lead with 1:47 left in the first half.

Munford got a first down on the following possession but the Redskin defense held and the visitors led 21-14 at the break.

Terrell McDaniel picked off Garrett on the opening drive of the second half but the Oneonta offense bogged down and punted.

Munford then drove 80 yards for the tying touchdown. On the drive, Garrett found Tavon Lawson three times on third down for gains of 22, 32, and 31 yards with the last connection going for a touchdown. The score was tied 21-21 with 6:06 left in the third quarter.

The score stayed tied for all of two plays. On the second snap of the following possession, Powell faked a screen pass and then lofted a perfect deep ball to Smith, who had gotten behind the Lion secondary. The sophomore motored 53 yards for the go-ahead touchdown and the Redskins were back on top 28-21 after Short’s kick.

The Lions looked to answer and moved from their own 33 to the Redskin 21. However, a fourth-down pass from Garrett to Lawson was just incomplete as Oneonta’s Smith got a hand on the ball and it fell incomplete in the end zone with 5:17 to play in the third period.

The Redskin offense went back to work on a drive that started with a bang when McDaniel found a seam and raced 47 yards. The drive ended when Powell found Latta wide open in the middle of the field for a 14-yard touchdown pass and Short put the Redskins up 35-21 with 11:16 left in the game.

Munford moved down the field on the ensuing possession but Garrett was high on a throw to Chapman and Oneonta’s Smith came down with the interception at the Redskin 21.

With everyone in the stadium knowing what was coming, the Lions simply could not stop the Redskin running game.

The drive didn’t produce points – it only covered 58 yards – but it sucked the life out of the Lions and wrapped up Oneonta’s third straight trip to the state title game.

For 14 plays, the Redskin offensive line and running backs hammered away at the Lion defensive front. McDaniel and Avery Reid rotated at running back and shared the load with Powell running a keeper for 5 yards, just to break things up.

The drive started with 8:26 showing on the clock and ended with Powell throwing incomplete on fourth down at the Lion 21 with just 22 seconds left to play.

Munford couldn’t complete a pass and the Redskins ran out the clock to wrap up the north for the third year in a row.

Munford had put up big numbers on offense this year but the Redskins limited the powerful Lions to just 309 total yards – 81 on the ground, 228 through the air.

Powell was the story on offense for Oneonta. The sophomore completed 12 of 17 passing for 208 yards with three touchdowns and no interceptions. He added 65 yards and a touchdown on 10 carries.

McDaniel led the Redskins with 98 yards on 14 carries while Reid added 65 yards and a score on 15 attempts.

A pair of sophomores, linebacker Riley Cole and defensive lineman Wil McKinney, led the Redskin defense with 11 and 10 tackles, respectively. Blake Bean had three tackles for loss and a sack. McKinney, Ethan Boyd, and Thomas Boyd also had sacks while McDaniel and Smith each had an interception.

Oneonta head coach Don Jacobs: “I like how we played. I thought we played well and I thought they did too. We scored first and then it seemed like every time they scored we would have an answer. We were able to overcome some things on the road and I like how we handled that. They were a talented, well-coached football team. I thought there were some great things done scheme-wise on both sides of the ball by both teams. It’s always good to get the win, especially this time of year.”

Munford ends the season at 12-2 while the Redskins improve to 13-1 and will play Charles Henderson (14-0) in the 4A title game in Tuscaloosa this Friday morning at 11 o’clock.