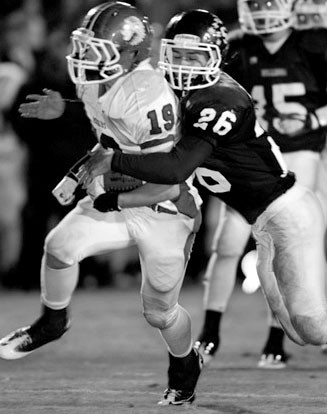 The Oneonta Redskins used a solid and opportunistic defense to pull away from Susan Moore for a 42-3 win last Friday night at Bulldog Stadium.

Susan Moore started strong with a 66-yard drive that ate up almost five minutes of the first-quarter clock. The Oneonta defense finally held at the Redskin 7 but Susan Moore’s Nestor Hinojosa knocked home a 24-yard field goal and the Bulldogs led 3-0 with 7:05 left in the first quarter.

Oneonta answered quickly with a 77-yard drive that ended on a 35-yard sprint by junior running back Tyler Smith. Adam Tekulve added the extra point and Oneonta led 7-3 with 4:18 left in the first quarter.

The Bulldogs made a big mistake on the following possession and the Redskins made them pay.

A Susan Moore fumble gave Oneonta the ball at the Susan Moore 39 and the Redskins needed just one play to capitalize as Schyler Walker hit Jalen Johnson behind the Bulldog secondary to give Oneonta a 14-3 lead.

Oneonta’s Alvin Scott picked off a Susan Moore pass on the ensuing possession but the Bulldog defense forced a turnover on downs at their own 19.

Susan Moore punted and Oneonta moved 81 yards on the ensuing possession with Smith scoring on a two-yard run to put the visitors up 21-3 with 2:54 left in the first half.

Oneonta’s Cody O’Toole picked off a Bulldog pass on the following possession but the Bulldog defense didn’t give the Redskins much room to breathe and the half ended with Oneonta up 21-3.

Oneonta played the second half without Walker, who was injured after being hit as he threw the ball late in the first half.

The Redskins took the opening possession of the half 50 yards in a drive capped off by a 5-yard pass from O’Toole to Chase Bryant. Tekulve added the extra point and the Redskin lead was up to 28-3.

Neither offense did anything for the rest of the third quarter and through most of the fourth until the Redskins took advantage of a couple of Bulldog fumbles.

Susan Moore managed just 20 yards of total offense in the second half while Oneonta had 121.

Preston Kent led the Bulldogs with 60 yards on 11 carries and one pass reception for 19 yards. Phillip McEvoy caught three passes for 34 yards.

Brett Glass completed 5 of 24 passes for 61 yards with two interceptions.

Oneonta got a game-high 155 yards and two touchdowns on 21 carries from Smith. He also caught two passes for 13 yards.

Walker completed 12 of 21 passes for 156 yards and a touchdown in the first half while O’Toole completed 5 of 9 for 31 yards and a pair of touchdowns.

Keaton Jones caught five passes for 48 yards, Johnson caught four for 80 yards and a touchdown, and Scott had four receptions for 34 yards and a score.

Susan Moore’s John Gober had 11 tackles while McEvoy had 10. Cody Self had eight tackles and a sack and Houston Jones had a pair of sacks.

Oneonta’s Blake Bean had a game-high 13 tackles while Smith and Taylor Oden each had 10. Walker Musso had eight tackles and a sack. The Redskins also got fumble recoveries from Oden, Musso, and Scott.

Susan Moore ends the season at 5-5 while Oneonta improves to 8-2 and will travel to Guntersville (8-2) for the first round of the 4A state playoffs this week.