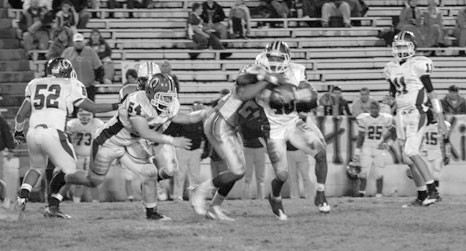 –courtesy J.D. Brooks Oneonta running back Vernarr Hughes tries to get away from a Fayette County tackler.

The Oneonta Redskins led 27-20 well into the fourth quarter but couldn’t hold on as Fayette County rallied for a 32-20 victory over the visiting Redskins last Friday night.


The Redskins started out strong and led 7-0 after the first quarter on a 44-yard touchdown pass from Travis Hankins to Alvin Scott.

However, Fayette County used the short-passing game to engineer a pair of scoring drives and took a 14- 7 lead in the second quarter.

Oneonta answered when Hankins hit Smith on a 51- yard, catch-and-run to tie the score, 14-14. The Redskins then took a 21-14 lead late in the half when Scott ran by the Tiger secondary and Hankins found him for a 55-yard touchdown pass. 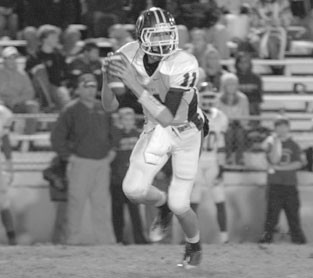 Fayette County pulled to 21-20 on an 8-yard touchdown pass from Evan Sims to Tim Walker but Oneonta went back up 27-20 when Smith capped off an eightplay, 72-yard drive with a 1-yard touchdown run. The extra point was blocked.


The Redskins gave up a 62-yard kickoff return but the defense forced a Walker fumble at the Oneonta 9 and the offense went back to work. Oneonta drove deep into Tiger territory but came up empty when a 32-yard field goal was just wide.

Fayette County came back with a five-play drive that covered 80 yards and Walker scored on a 6-yard run. Oneonta knocked away the two-point conversion and the Redskin lead was just 27-26 with 6:57 to play.

Oneonta took over at their own 13 after a penalty on the kickoff return but the drive ended with a punt after a deep pass to a wide-open Scott was just overthrown on third down.

The ensuing Fayette County drive took just one play. Sims lofted a pass down the middle of the field and Walker split a pair of Redskin defensive backs and hauled in the pass at the 10 before trotting into the end zone for what turned out to be the winning points. The Redskin defense stuffed the two-point conversion run but Fayette County led 32-27 with 5:06 to play.

Oneonta got the ball at their own 37 after the kickoff but the ensuing drive began with an errant shotgun snap and ended with a Fayette County interception at the Tiger 40.

The home team was able to run out the clock with a pair of key third-down conversions.

Fayette County couldn’t run against the Oneonta defense, finishing with just 54 yards on 24 carries, but Sims completed 25 of 38 passes for 331 yards four touchdowns.

Oneonta’s Hankins had a good night, completing 18 of 27 passes for 245 yards for three touchdowns and two interceptions.

Vernarr Hughes had 96 yards on 12 carries to lead a Redskin ground attack that picked up 138 yards on 26 carries.

Smith caught nine passes for 105 yards and a touchdown while Scott had five catches for 128 yards and a pair of scores.

Fayette County improved to 8-3 on the year while Oneonta ended the year at 8-3.