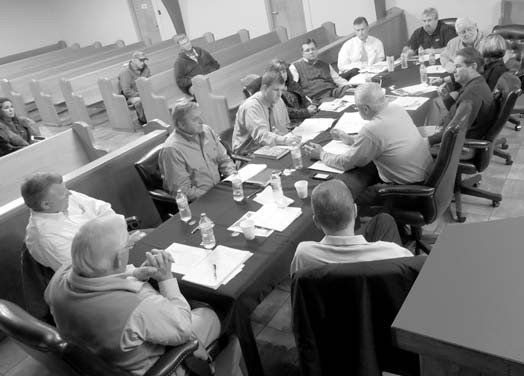 The Oneonta City Council met with the Oneonta City Board of Education last Thursday night to consider a request from the board that the school system be routinely provided an allocation from the city as part of its annual budget. All members of both bodies attended the joint work session except school board member Steve Anderton, who was out of town.

The approximate outcome of the meeting can be summarized in three points, though neither side in the discussion formally reviewed them.

• Council member Tim McNair said the city has no money currently to meet the request for funding support; council member Mark Gargus agreed. No other members took issue with that position.

• As Oneonta superintendent Michael Douglas pursued the question of whether and when the school system could expect to be included in the city’s budget, the discussion turned to a tax increase as the only available method to raise needed revenue. A sales tax increase was discussed as being more palatable to voters than a property tax increase.

• At the end of the meeting, Norris concluded by asking that the council be given time to discuss the matter further among themselves. He said a follow-up meeting with the school board would be arranged.

Douglas had formally requested inclusion in the city’s budget in a letter sent the latter part of last month to the mayor, city manager, and city council members.

City manager Ed Lowe told council members in an initial council-only session to discuss the school board’s request of .25 percent would amount to about $350,000 based on last year’s revenues. In discussions with The Blount Countian prior to the joint work session, Douglas said the .5 percent of tax revenues would equal an amount in the $650,000 – $700,000 range annually.

What follows are highlights of Douglas’s letter requesting to be included in the city’s budget, and explaining why he feels it should be considered.

• The decline in recent years in state funding, and the lack of an annual revenue stream of municipal funding has resulted in the system’s cutting locally-funded teaching units from 9 to 1/2. Instructional activities that suffer include band, choir, art, robotics, instructional coaches, career tech coaches, etc.

• The school system is a primary reason why people move to and live in Oneonta, and is the primary economic driver in the community.

• As far as is known, every city school system municipality provides an annual appropriation to its school system, in addition to occasional one-time appropriations. (Asked by The Blount Countian if Oneonta is literally the only one out of 70 city systems in which the host city does not provide an annual allocation to its school system, Douglas replied,“I don’t know of another one.”) For eight city systems for whom data is give in the letter, those appropriations range from as little as $300,000 -$500,00 annually in the case of Tarrant to $1.5 million in the case of Brewton.

• Capital needs include 10 projects, all current needs except the last, which is a new elementary or high school in 2026, projected at $40 – $60 million; other projects range from $100,000 to $1.5 million and include a new band room, auditorium renovation, library renovations in elementary and high school, air conditioning in main and auxiliary gyms, canopies for buses and students, and improvement of athletic facilities.

• Why now? The board perceives new sources of revenue have become available, and sees substantial new expenditures on the horizon such as the Wallace State Campus projected for Oneonta, and fears one of the city’s main assets, the K-12 school system, is getting left out. The city is allocating a lot of money to the Wallace State campus that will impact at best a small number of students, according to Douglas. Twenty-seven Oneonta students a year go to Wallace State, he said. The city can impact 1477 Oneonta students by including the school system in its budget.

• The school system has slipped in academic performance in recent years from a top 10 school system to a top 20 system statewide. (Douglas made this point in the joint work session meeting, not in his letter. The exact rank he quoted for current perfomance was 16, based on recently-released ACT test results.)

Douglas told The Blount Countian in an interview after the meeting:“Our sole purpose was to get into the city’s budget for a yearly allocation. The city told us it’s not possible with their existing resources, and told us the only way to do that was with a sales tax increase. We want to make sure we continue to provide programs and staffing to improve instruction for our students, because we don’t want to lose ground in terms of what we offer or who we can hire. Once you lose ground – in athletics, the arts, instructional quality, whatever – it’s much harder to regain, than to keep from declining in the first place. What I would like for people to realize is that we didn’t go to the council to ask for a tax increase. We asked to be included in the budget.”