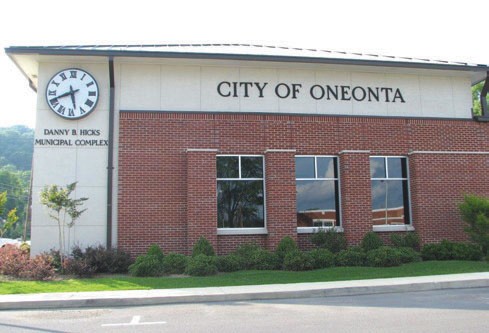 Oneonta resident Tim Alexander brought his concerns over flooding in his yard before the Oneonta City Council in its latest meeting. Alexander reviewed previous requests he had brought to the attention of town officials for help with town street signs and a three-way stop near his home.

Distributing photographs, Alexander explained some of the drainage problems. He receives run-off from a hill above him, he said, and from a pipe across the street from his house. He said efforts the city had made had resulted in gravel washing into his yard and not resolving the issue.

Mayor Ray expressed sympathy, saying he had made several trips to see the situation. Ray referred the discussion to councilor Ross Norris, who works full time with Oneonta utilities. Norris said his department had made attempts to correct the problem and would continue to do so. He held, however, that the ditch at Alexander’s carries the natural flow from the area. He said the city would have to tread carefully, since it is unable to work on private property.

The council re-approved the current property tax rate effective for 2011. The city assesses six mills for general operation and 7.5 mills school tax, in addition to any other required state and county levies.

At the recommendation of director Gail Sheldon, the council hired Michael Barnett and Maranda Dushock as summer workers at the city library. Barnett returns from last summer’s employ, while Locust Fork resident Dushock joins the staff for the first time.

In another personnel matter, councilors decided to advertise for a full-time firefighter position, vacated when an employee went on disability. They also agreed to declare surplus two police vehicles and place those on govdeals
.com
for sale.

All members (Ray, Norris, Hal Buckelew, Mark Gargus, Tim McNair, and Danny Robinson) attended the May 11 meeting. The council holds its regular sessions the second and fourth Tuesdays of each month at 5:30 p.m. in city hall.