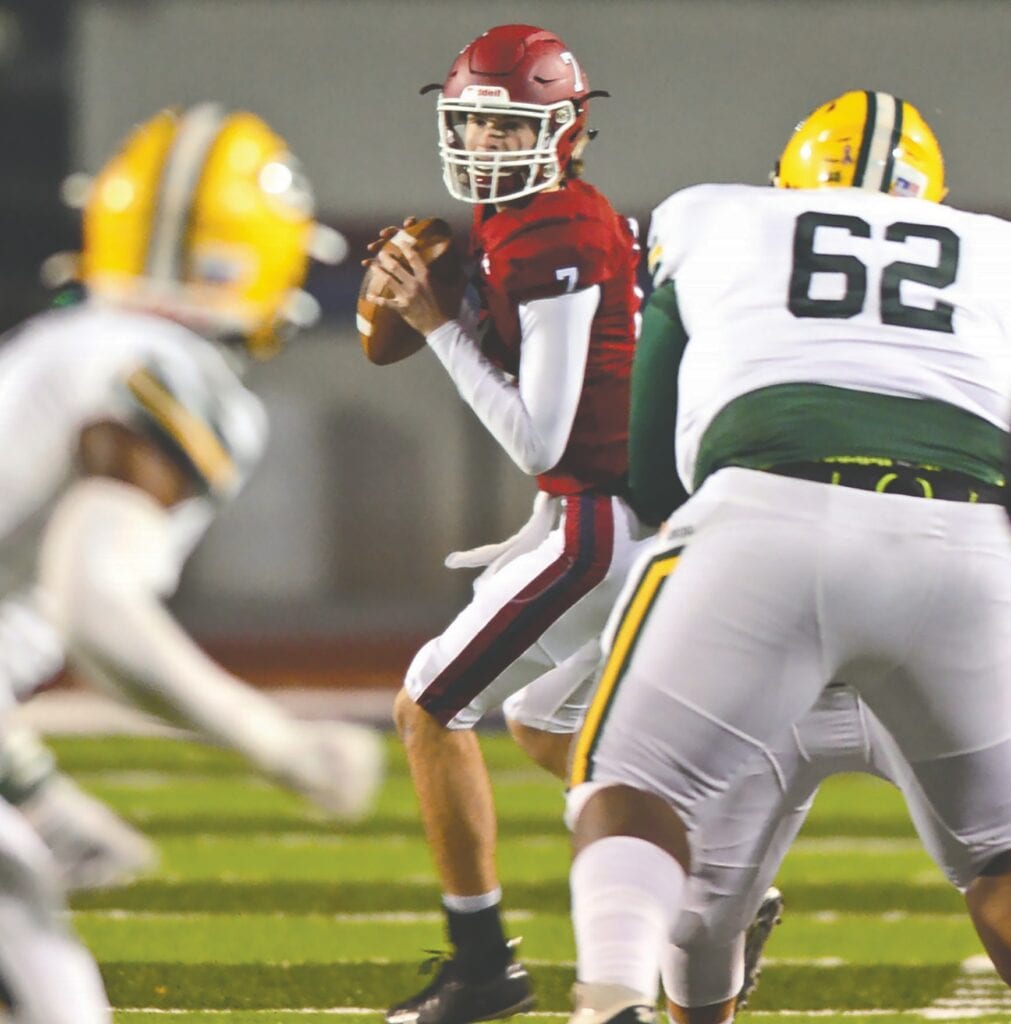 Quarterback Connor Faust drops back and looks for an open receiver. -www.southernexposurephotos.com

The Oneonta Redskins’ playoff run ended Friday night at the hands of the visiting Gordo Green Wave. The Redskins were within a touchdown at halftime, but Gordo outscored them in the second half to win 39-21.

Gordo put the first points on the board on their opening drive. They traveled 65 yards in seven plays and scored on a 26-yard pass with 8:57 on the clock. The PAT was good giving Gordo an early 7-0 lead. After exchanging punts, the first quarter ended with Oneonta near midfield.

Unable to do anything with the drive, Beau Ragsdale punted and rolled the ball out of bounds at the 1-yard line. Gordo again turned their first possession of the quarter into points. A 21-yard TD pass and good PAT capped the 99-yard, 11-play drive and Gordo was up 14-0 with 7:01 left in the half. Oneonta punted again on their next short drive. Gordo then drove into Oneonta territory, but Cameron Daily intercepted a pass to set up Oneonta’s only scoring drive of the half. Starting at their own 27-yard line, the Redskins drove 73 yards in 10 plays (aided by two Gordo penalties) scoring on an 11-yard Connor Faust pass to Riley McGill. Angel Marquez’s PAT was good to put the Redskins on the board 7-14 with only 0:19 on the clock. 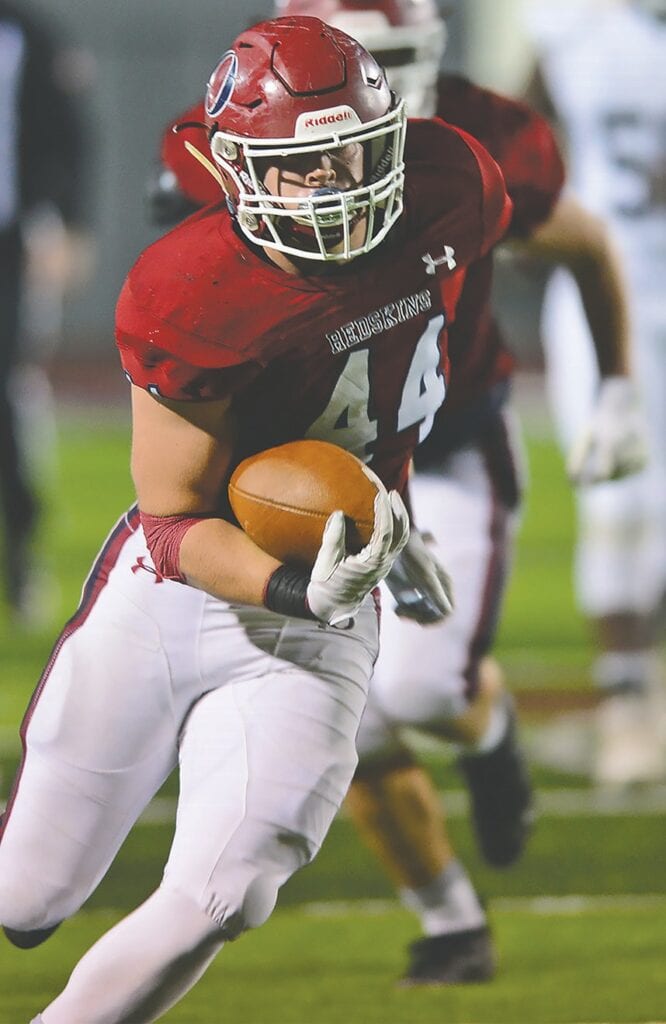 Luke Hodge makes a first down after catching a pass. -www.southernexposurephotos.com

Oneonta hoped to get something going as they received the second half kickoff, but Faust threw an interception on the third snap. Gordo scored on an 84-yard pass with 9:19 on the third quarter clock. The PAT was no good widening their lead to 20-7. Oneonta fought for their next score going 58 yards in 12 plays. Faust hit Wil Robertson from 8 yards out for the TD with 4:48 on the clock. Marquez’s PAT was good to again bring the Redskins within a touchdown at 14-20. Gordo answered on their next drive on a rushing touchdown from 5 yards out. The two-point conversion attempt was no good making it 26-14 with 2:50 to go in the quarter. Oneonta turned their next drive over on downs in Gordo territory. Gordo took full advantage of an unsportsmanlike conduct call on Oneonta head coach Phil Phillips to score on a 40-yard pass with 0:29 on the clock. The good PAT made it 33-14. Oneonta ended the third quarter on their side of the field. 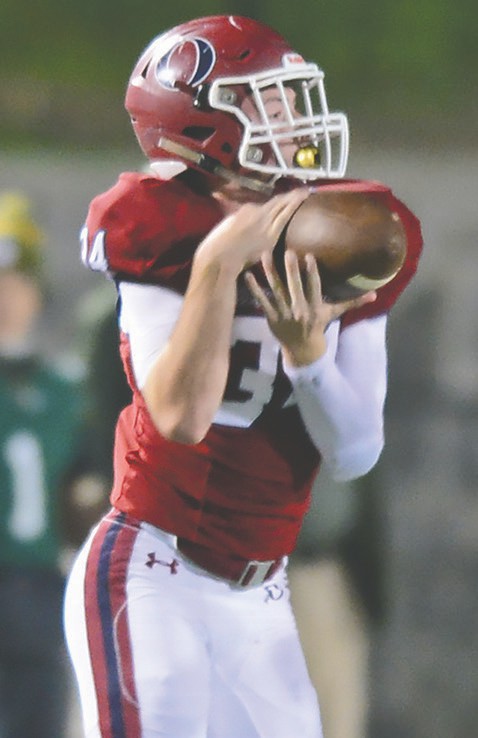 Two minutes into the fourth, Faust threw another interception. Gordo was unable to do anything with the drive, and turned it over on downs. Oneonta got nowhere and punted on fourth down. Gordo took their next drive 68 yards on six plays capped by a 4-yard TD run. The extra-point kick was short giving Gordo a 39-14 lead with 3:11 to go in the game. Oneonta managed one more score on their next drive. Damarian “Fluff” Bothwell capped a 63- yard, seven play drive with a 4-yard TD run. Marquez’s PAT made it 21-39 with only 0:44 to play. Gordo’s QB took a knee and let the clock run out.

The Redskins managed only 296 total offensive yards to Gordo’s 460. Faust completed 11-of-23 for 114 yards and two touchdowns. Leading rusher was Moon with 179 yards on 36 carries. Bothwell followed with 15 yards on three carries and one touchdown. Leading receiver was Luke Hodge with 49 yards on four receptions. Robertson had 32 yards on two catches, one of which was a touchdown. Ragsdale had 20 yards on three catches. McGill scored on his single 11-yard reception. 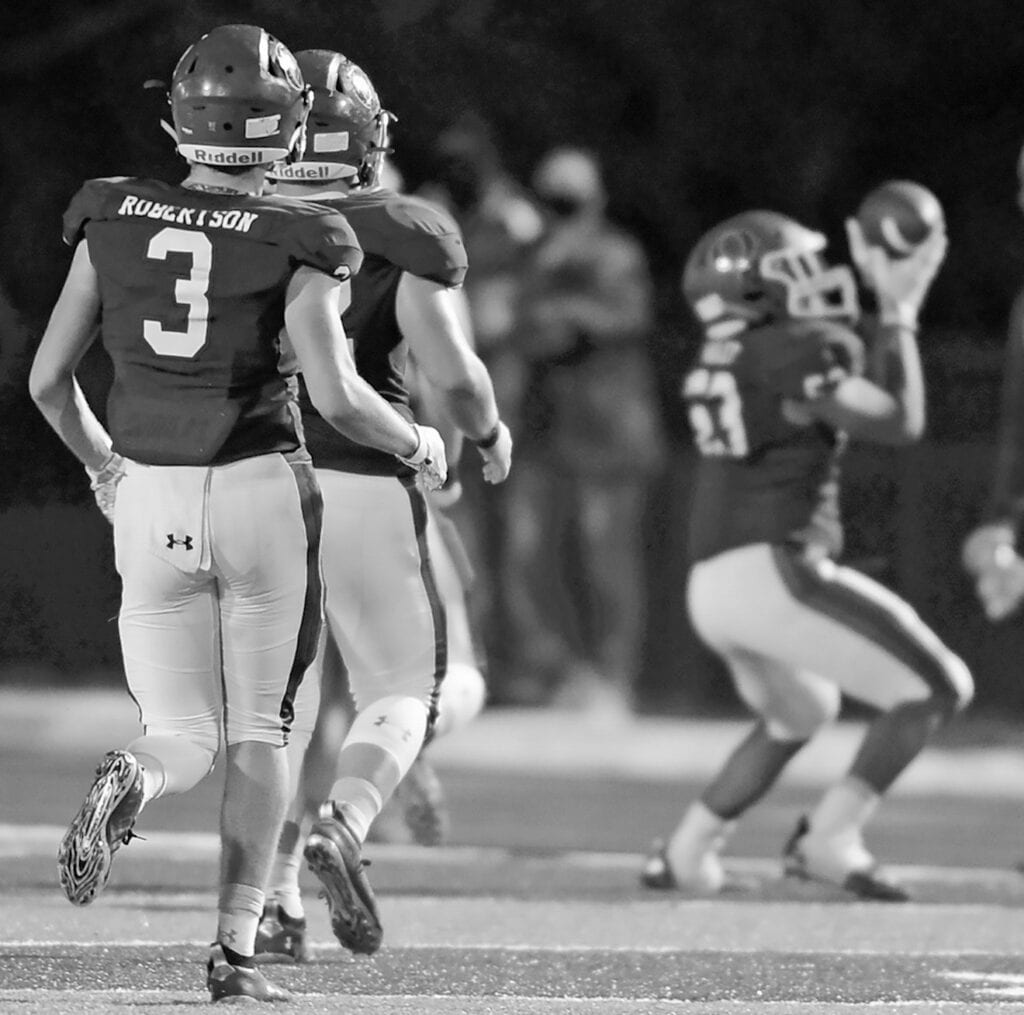 Cameron Daily’s interception in the second quarter set the Redskins up for their first scoring drive. -www.southernexposurephotos.com

Defensively, Robertson led the pack with eight tackles (one for loss) and a sack. Kobe Harper followed with six tackles, one for loss. Jacob Handley contributed five tackles, and Daily, Hodge, McGill, and Braden Taylor had four each. Hodge and Taylor recorded one each for loss and Daily had an interception.

Overall, Moon finishes the season in second place on the county leader board for rushing. In 10 games, he racked up 1,410 yards on 204 carries and scored 17 touchdowns. Eli Buse takes third place for receiving, despite missing both playoff games because of COVID exposure regulations, with 465 yards on 19 catches and eight touchdowns. Faust sits in fourth among quarterbacks completing 103- of-193 (53 percent) for 1,417 yards and 15 touchdowns. Luke Hodge finishes in second defensively with 108 total tackles (40 solo, 68 assists), one sack, and 15 tackles for loss. 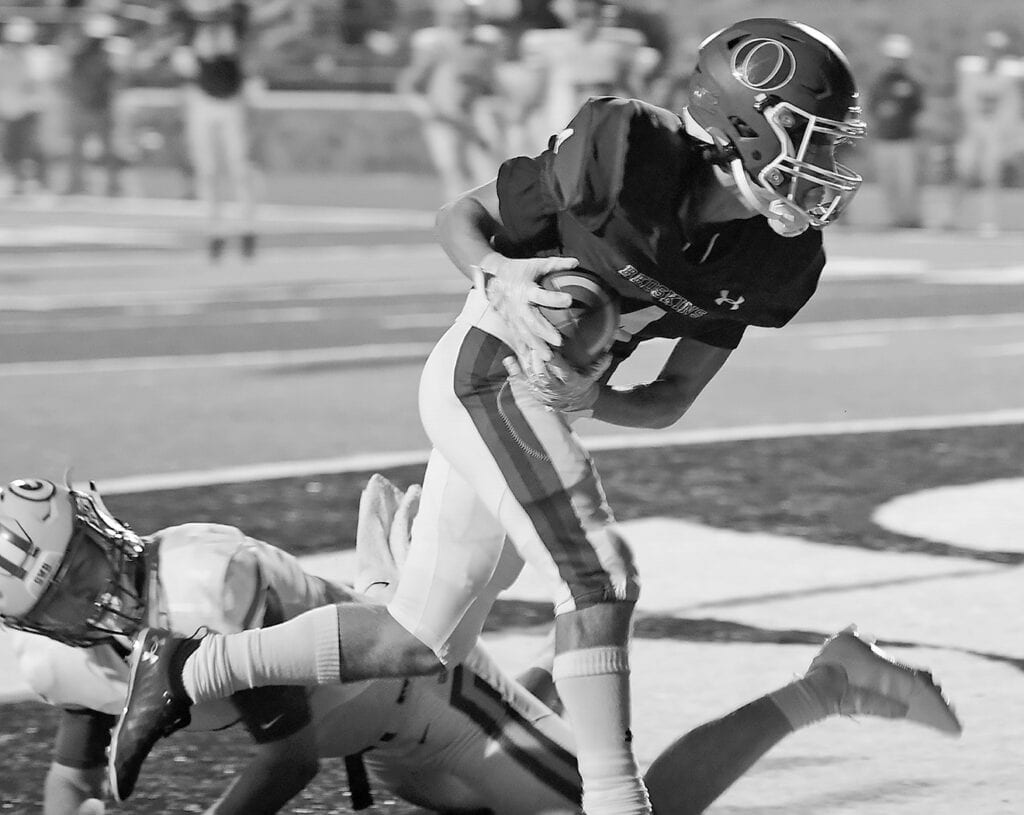 Riley McGill catches a touchdown pass with seconds to go in the first half. -www.southernexposurephotos.com

Oneonta ends their season at 7-5 (which includes forfeiting their first two non-region games due to COVID). Gordo improves to 12-1 and will host West Limestone Thursday night.

Special thanks to Charles Gibbons for providing stats this season and Talmadge Skillman for writing assistance.