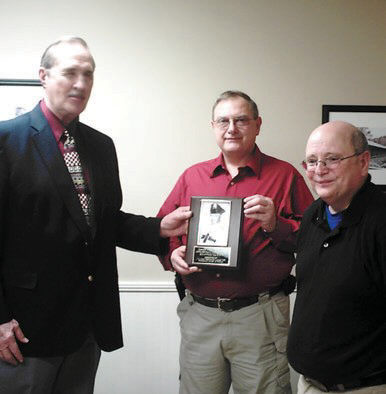 On May 8, 1973, officer Paul Ethan Small, then with the Oneonta police force, was in the process of making an arrest. The suspect resisted and the two men scuffled until finally the officer secured the suspect in the Oneonta jail.

Tired from all the commotion, Small went for a much needed break at what used to be ‘Round the Clock restaurant. While only a block away, Small slumped over the steering wheel of his patrol car and died suddenly of a massive heart attack. He is the only member of the Oneonta Police Department ever to have died in the line of duty.

Thirty-six years later Small was honored at the same location where he was headed when he died so unexpectedly.

Saturday night, the local chapter of the Fraternal Order of Police met at the new location of Charlie B’s to present Small’s family with a plaque honoring his dedication and service. His two sons, Gene and George, and their families were all present as well as several officers from around the state. Bill Newman, president of the local Fraternal Order of Police, made the presentation along with Oneonta police chief James Chapman.

Gene Small, a retired state trooper, recalled the night of his father’s sudden death. “I was on the phone with mother,” he recalled, “when she found out daddy died.”

Small was working at the Governor’s Mansion at the time of his father’s death.

The Small family now has a third generation in law enforcement. Nathan Small, his grandson and son of retired state trooper Gene Small, also works as a police officer. In 2000, the family visited the National Memorial for Officers Down in Washington, DC. In remembrance, Nathan left his police cap and a small red rose beside his grandfather’s name. Unbeknownst to him at the time, the image of the cap and rose appeared on the cover of the National Magazine for Fallen Officers.

Officer Paul Small also served 18 years on the Blountsville police force and five years as chief deputy with the Blount County Sheriff’s Department. He had served on the Oneonta police force for four years at the time of his death.

A plaque honoring Small will also hang in the Oneonta Police Department.