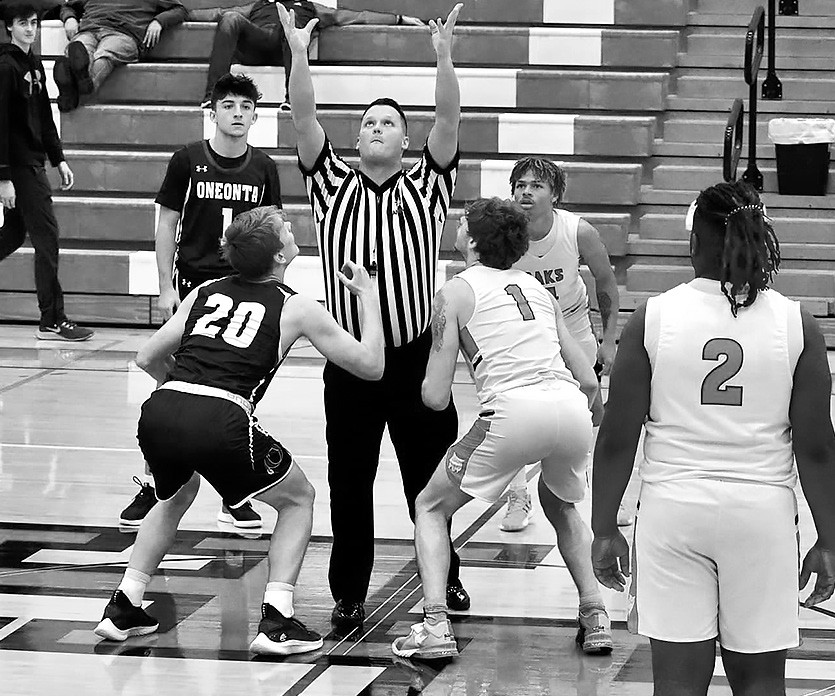 Oneonta tips off against Saks during the championship. -Christy Miller

The Oneonta varsity boys are off to a good start this season. With big wins already under their belt, they traveled to Hokes Bluff last week for the Patrick Bell Memorial Christmas Tournament and came away with the championship. Oneonta defeated Westbrook Christian in the first game, Skyline in the second, and Saks in the championship.

In game one, they defeated Westbrook Christian 64-58. Down by as much as 10 in the second half, the Redskins didn’t get rattled and made their comeback. Senior Colin Swindle led the way with 23 points, six steals, and four rebounds.

“Really proud of our guys,” head coach Jason Parish said. “Our guys’ grit and our pace of play payed off in the fourth.”

Game two against Skyline came down to the wire with the Redskins coming out on top 70-67. Senior Harrison Miller led the way with 19 points, one rebound, and one steal. He was 5-of-8 from the three-point line.

“Good win over a very talented Skyline team. A lot of things we have to still improve on, but when we do, this team is going to be a lot of fun,” Parish said.

In the championship game they took down Saks 48-38. Miller again led the way with 16 points, eight rebounds, two assists, and two steals. He was 5-of-9 from the three-point line.

“Great job by our guys to get the win,” Parish said. “Love these guys and the way they compete.”