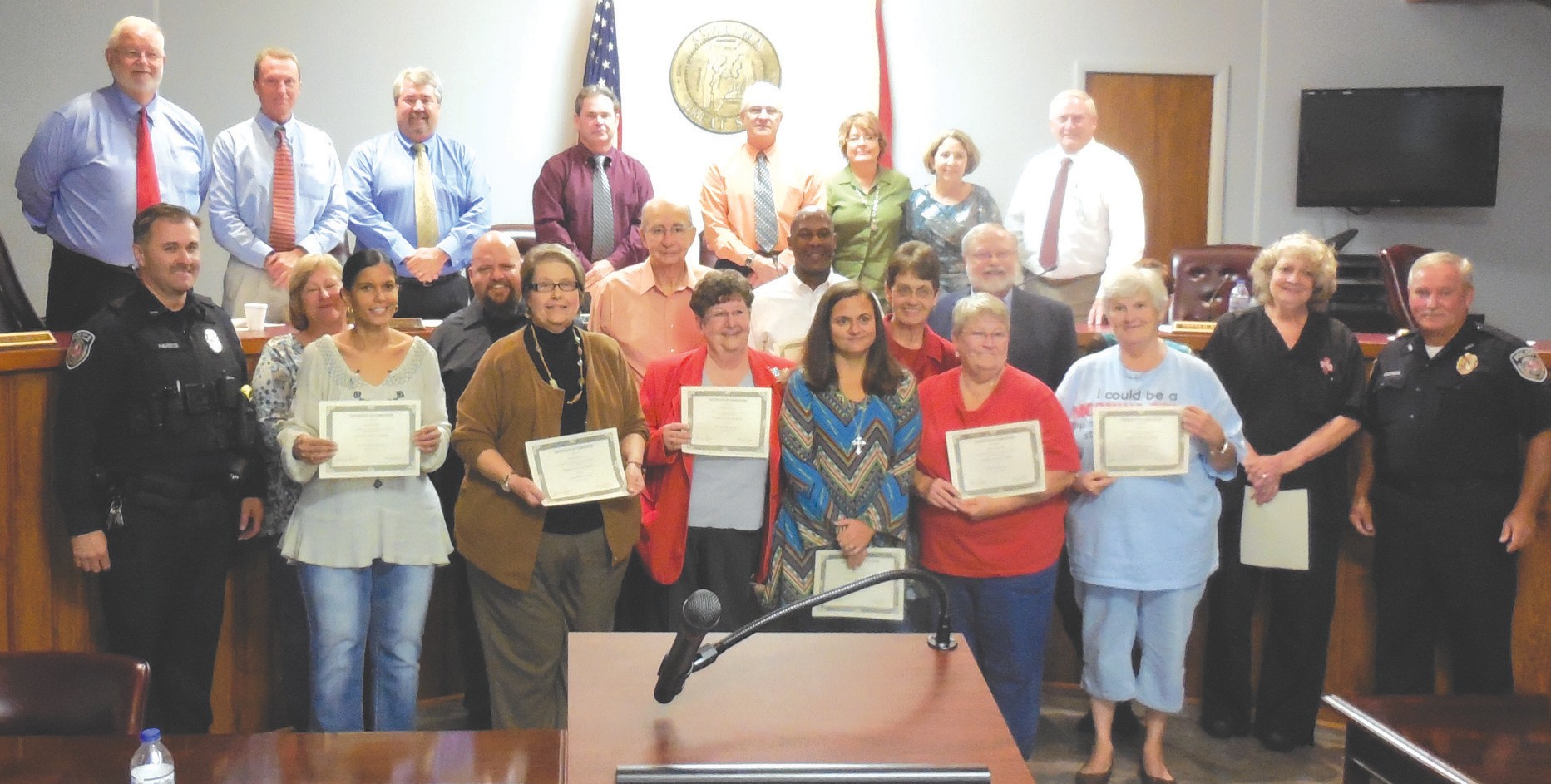 The Oneonta City Council recognized graduates for the fifth year of its citizens academy. Begun by police Chief James Chapman, the academy provides an opportunity for participants to learn more about local government and enjoy direct experiences with police. Members are placed in certain police training situations and discover some of the rigors that the job entails.

All but one of the 15 graduates attended the latest city council meeting to receive their diplomas and have an opportunity to critique the program. Four of the class members offered praise for the academy, citing their ability to get to know the officers, the quality of the speakers, the camaraderie of the members, and their learned appreciation for the quality of their city. Officer Mike Harris, who currently leads the program, awarded the certificates and invited council and attendees to a reception after the meeting.

City employee and Oneonta – Blount Agribusiness Center Board member Andy Alexander updated the council on the center. Some councilors had requested regular reports of the board, to which the council has been a major contributor. He presented an optimistic outlook.

Alexander said the Blount County Fair had enjoyed the second-highest income during the past 10 years. He said attendance at Phobia, the Halloween haunted house, had increased 25 percent and revenue after expenses tripled. When asked to list the figure, he said the center received $22,000 in profit from the event.

He said the center had hosted a religious retreat for the Corpus Christi Catholic Church which drew some 2700 people over the last weekend. Alexander noted that while the center charged little for use of the facility, the attendees provided significant additional business revenue during the weekend. Over 700 attended the gospel singing event the night before the council meeting.

The center hosted the greater Birmingham Dog Agility Show last weekend, with canines coming from throughout the Southeast. In upcoming months, it will serve as the venue for some scheduled private rentals, a major bull riding event and a gun show. Alexander said the board is attempting to arrange a home and garden show for the spring.

At the recommendation of city manager Ed Lowe, the council agreed to limit the number of free rentals for non-profits using the city’s depot facility. Lowe asserted that the city has had groups unable to rent or use the facility because some non-profits have scheduled it several times a month. The new policy limits a non-profit to one free use per month.

Concluding old business, the council approved the Crisis Center’s use of the former Church of Christ sanctuary for its SANE (sexual assault nurse examiner) program and counseling services. Councilors accepted the programs as clinic activities permitted under special use within the building’s current zoning status.

During regular reports, Councilman Hal Blackwood won approval for over $5,000 in capital expenditures for the city’s public works department. The two items, a welder and hypothermic plasma cutter, ran a bit over $2,600 and $2,400, respectively.