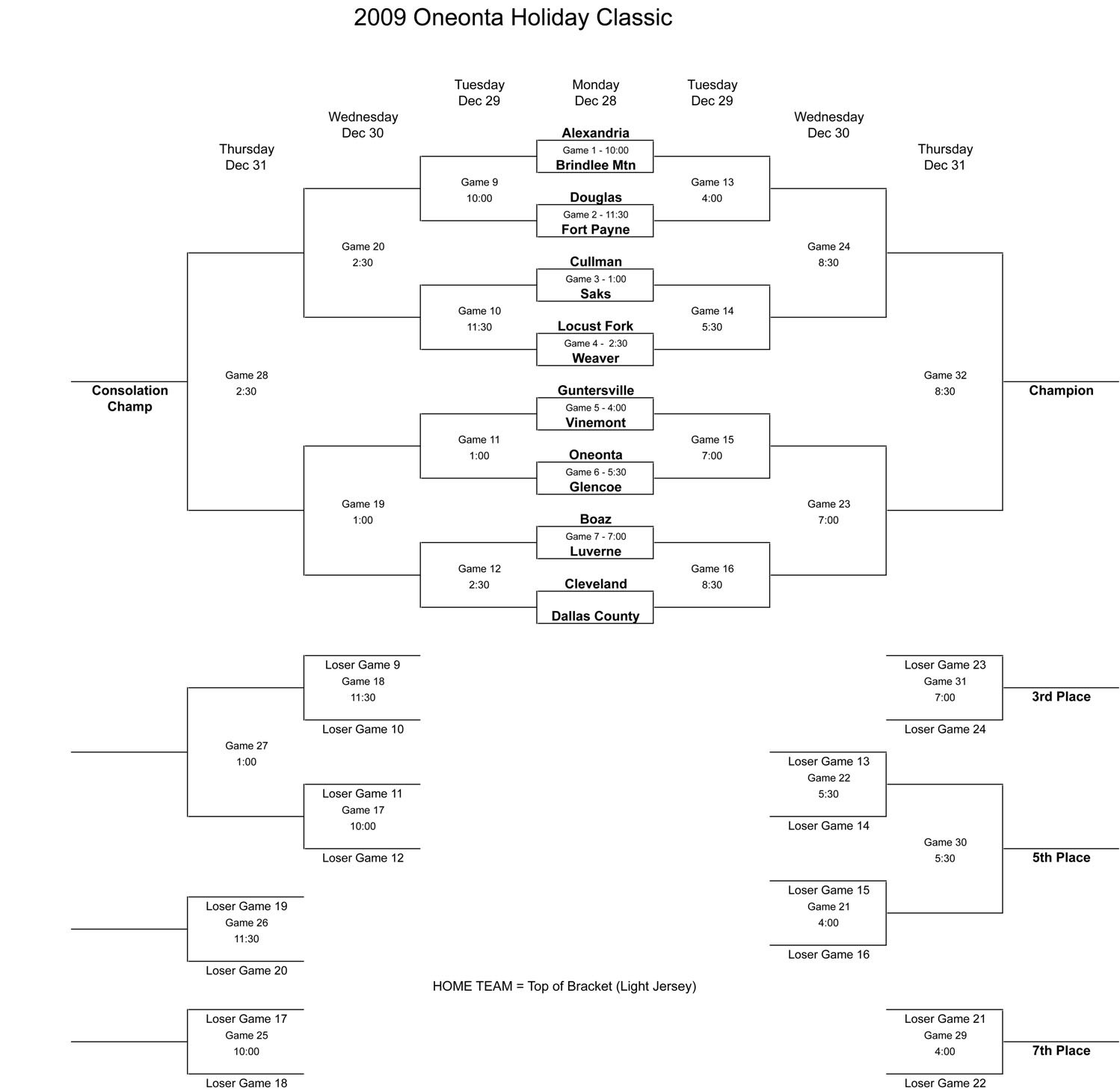 The 46th edition of the Oneonta Holiday Classic will tip off Monday at Oneonta High School’s O.R. Ratliff Gymnasium and this year’s field may be as balanced as any in the tournament’s history.


No out-of-state teams are in this year’s tournament but a couple of south Alabama teams will make their first appearance. 3A Luverne and 4A Dallas County play athletic, up-tempo basketball and each will be a threat to win the tournament.

Defending champion Alexandria is back but the Valley Cubs are trying to replace three starters from last year’s team that finished 24-4 and lost to eventual state champion Anniston in the finals of the Northeast Regional at Jacksonville State University.

Three teams in the tournament are ranked, including two of the local schools.

Oneonta is ranked No. 10 in Class 4A while Cleveland is the No. 10 team in Class 2A. The other ranked team in the tournament is Weaver, which checks in at No. 7 in 3A.

Neal Wester’s Redskins are 9-1 on the season after drilling 5A Cullman (7-4) 63-47 last Friday. Oneonta has a nice mix of youth and experience and this could be one of the deeper teams that Wester has had. The Redskins have drawn a tough opener with a rugged Glencoe (5-5) team that features seven seniors on the roster.

Conny Lowery’s Cleveland Panthers were rolling along just a week ago at 7-1 with only a 47-43 loss to Moody in the Mortimer Jordan Thanksgiving Tournament marring the record. However, a 79-64 loss to Oneonta and a 71-50 defeat at the hands of 2A Area 13 foe Cold Springs have left the Panthers at 10-3. Cleveland will take on the Hornets of Dallas County (6- 4) in the late game on the first night of the tournament.

The Weaver Bearcats could have their hands full with a Blount County team in the first round. Locust Fork, under head coach/principal Daniel Smith, is off to a 7- 3 start on the year and has thrived in the early part of the season with a fast-paced offense and an aggressive defense.

Perhaps the hottest team in the tournament will come from neighboring Marshall County. Boaz has gotten off to a fast start on the season under second-year head coach Jeremiah Patterson. Only a pair of close losses (63-60, 58-50) to Arab have put a blemish on the Pirates’ record which now stands at 12-2 after the Pirates got a bit of revenge with a win over the Knights Monday night. The Pirates will tangle with 3A Luverne (4-3) at 7 p.m. Monday.

Guntersville is another team to keep an eye on. The Wildcats have won six in a row and are now 7-3 on the year. Fred Steger’s team will take on 3A Vinemont at 4 p.m. on the first day.

Admission is $6 each day of the tournament and children in the third grade and younger will get in free.