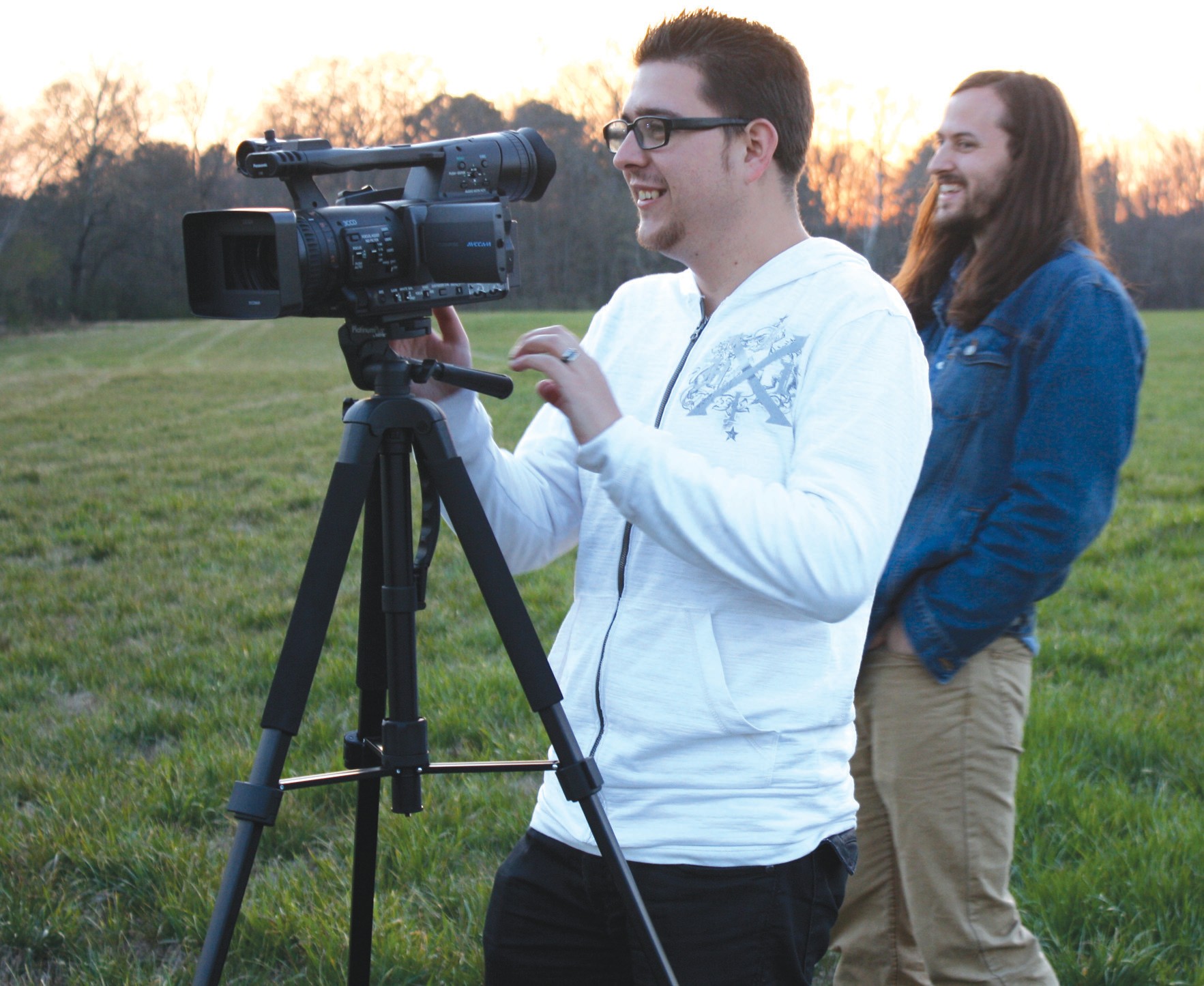 Director Scott Duarte films a scene for his film “Project Urban Legend,” along with his friend, Stuart Sanders, who is not only in the film, but also welcomed Duarte to film on his family’s property in Oneonta.

Anyone driving down county road 39 last Thursday at dusk saw three police vehicles parked in a field with their blue lights flashing.

They also saw four police officers and a police dog scouring the area and looking for…something. The scene must have looked like every on-duty Oneonta police officer had been called, but no worries. 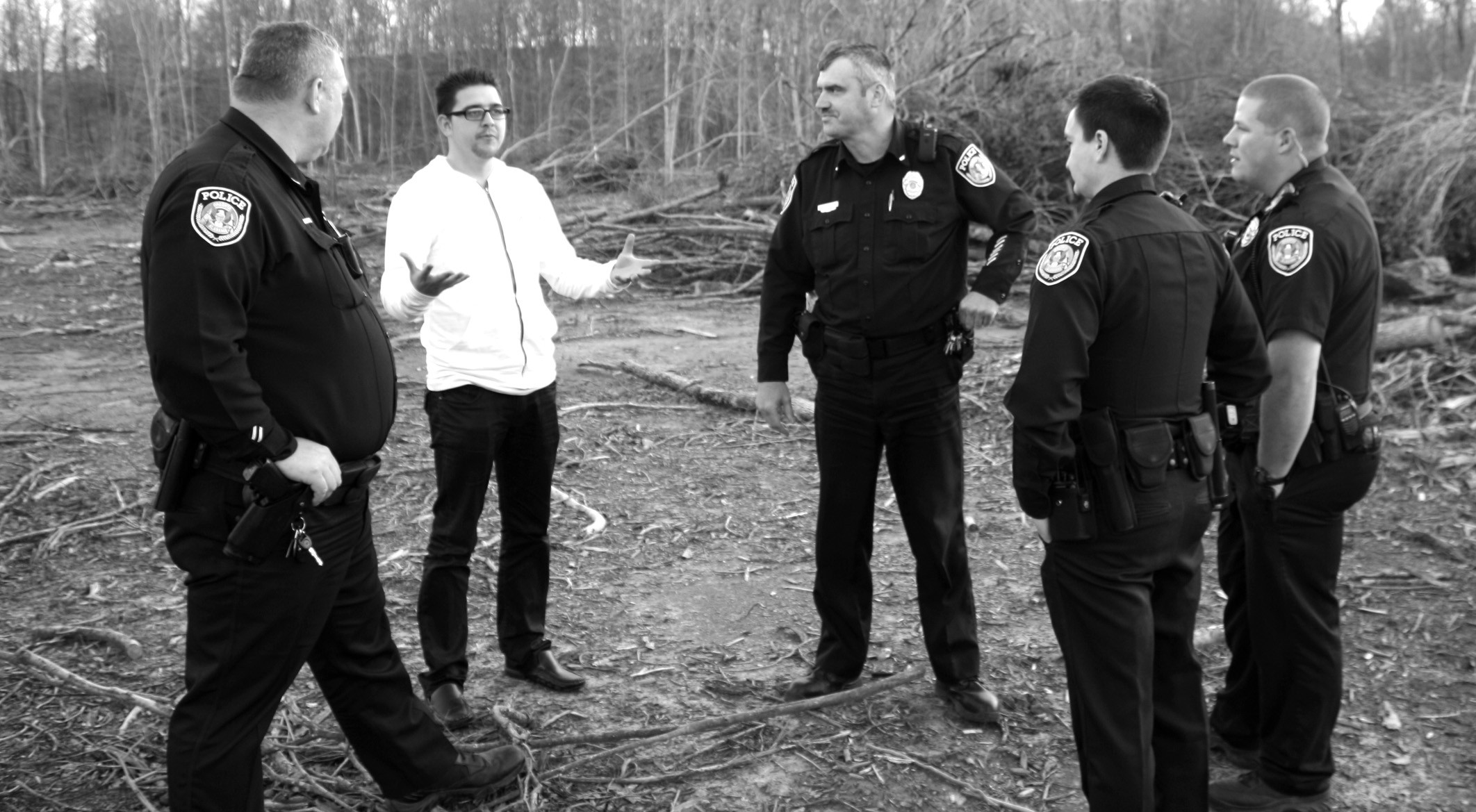 Duarte directs officers of the Oneonta Police Department who will be featured in his movie.

The Oneonta Police Department will be featured in “Project Urban Legend,” a thriller produced by Visionary Production Inc. The film, also known as “P.U.L.” is scheduled to be released in theaters during the first week of October.

The PG-13 rated movie centers on five film students from a local college who camp out at the nearby state park in hopes of capturing on video whatever is to blame for the recent disappearance of campers and animals in the area.

Scott Duarte, an Orlando native and the producer and director of the film, got the idea for the movie in 2011 after attempting to camp out in his backyard before getting spooked. According to Duarte, the movie was originally intended to be a short film, however, the project has been upgraded into the company’s biggest feature film.

Duarte says the film has a “Blair Witch Project” feel considering the majority of the movie involves the “found footage” the students filmed. No big cameras were used in the making of the movie, according to Duarte.

“I wanted to make it as authentic as possible,” he said. “Besides the first and last scenes, the movie is the found footage.”

Even though the movie is a thriller, humor is thrown in the mix as well.

“You sort of forget you’re watching a scary movie for a little while,” Duarte says. Oneonta on the big screen

The city of Oneonta can give thanks to Oneonta native Stuart Sanders for the nationwide exposure.

Sanders met Duarte four years ago after Sanders moved to Orlando for college and began playing with a Christian rock band that performed at a coffeehouse/music venue owned by Duarte’s family.

They have remained close friends ever since, and when Duarte was in need of a large, secluded area for the movie to be filmed at, Sanders knew of the perfect place – his family’s property in Oneonta.

Sanders also receives some screen time in the film as the park ranger.

Not only did the group film on the Sanders’ property, they also shot a scene at a local restaurant, Giovanni’s. Most scenes were filmed in Oneonta with a few scenes shot in Florida and Illinois.

Filming in Oneonta took place for 10 days back in October, however, Duarte decided to add one more quick scene involving local police officers and revisited Oneonta on Thursday to shoot that scene.

Oneonta police Chief James Chapman says he only granted permission for the OPD to be in the film after talking with Duarte for a cou- ple of hours. Chapman and Duarte discussed the rating of the film, how the department and city would be depicted, the basic aura of the movie, among other subjects.

“It puts our city and our department in a good light,” Chapman said. “If it would have been a bad reflection, I wouldn’t have allowed the department to be a part of it.”

Chapman said during his discussion with Duarte, the director said when he went back to Los Angeles people in the town expressed interested in shooting more films in Oneonta and the surrounding areas because of the perfect blend of the rural and city atmosphere.

“I believe this is a good thing for our city and our department,” Chapman said. ‘I’m just a normal guy with a camera’

Duarte is looking to “show Holly-wood a different side of the coin” with his film work.

“We won’t make an R-rated film,” Duarte said. “Even if it is scary, we believe everyone should be able to see it. I want my films to be fun for the whole family and for parents to have peace that their kids can watch them.”

Duarte says the whole process of becoming a producer and director began after he asked God what He wanted him to do. Duarte says he received an answer – make movies. Before then, Duarte had never even picked up a video camera.

“I asked God what the steps were to do that and told Him, if I’m going to do this, You’re going to have to teach me,” Duarte said. “I’m just a normal guy with a camera. This was given from God.”

Already, Duarte is in the preparation stages for his next film – the exact opposite of “P.U.L.” – a romance that Duarte describes as elegant.

The script is finished for the next movie, casting is scheduled for July, the cameras are prepped to begin filming in the summer of 2014, and Duarte hopes for it to be released in 2015.

However, Duarte says he may be visiting Oneonta in the future, to film a sequel.

The movie will premiere in Boaz, and Duarte says the film will be in theaters all over the country and released on DVD and Video on Demand.