For the third straight year, the Oneonta Redskins will play for the 4A title

The Redskins took down Munford 35-21 last week while Charles Henderson of Troy held off UMS-Wright 38-36 in the south.

Oneonta faces a program in Charles Henderson that has mainly competed in Class 5A.The Trojans were a traditionally good-but-not-great 5A but have gone 9-4 and now 14-0 in Class 4A.

The Redskins will play for a state title for the eighth time in school history while this is Charles Henderson’s second appearance in a championship game.

Tickets are $12 if purchased in advance (plus a small service fee) or $15 if purchased at the gate. For tickets or other information, go to www.super6al.com. 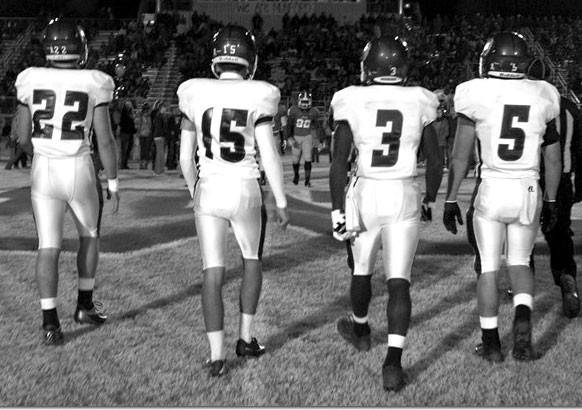 Oneonta is making its 32nd playoff appearance and the Redskins are 52-28 overall in the postseason. The Redskins are 2-5-1 in the finals. Oneonta is averaging 46.8 points per game and giving up 11.1 points.

Oneonta head coach Don Jacobs is 69-22 overall – 22-13 in three years at Elkmont and 47-9 in four years at Oneonta. He is 15-6 overall in the playoffs, 13-3 in the postseason at Oneonta. His teams have now played for the 4A title each of the last three seasons.

Oneonta’s opponents are a combined 83-74 while Charles Henderson’s opponents are 84-74. The Redskins are the three-time champion of 4A North while the Lions were 8-4 last year and knocked out in the third round 33-21 by Dora.

Powell has 374 yards and 7 touchdowns on 90 carries and it was his 50-yard sprint through the Munford secondary that broke the ice and got the Redskins on the board early last week.

Trevor Smith had a big game last week with three catches for 124 yards and a touchdown. He leads the Redskins with 36 receptions for 561 yards and is second on the team with 6 touchdowns.

The interesting matchup on Friday could be Brock Latta against the Henderson linebackers. Latta has caught 28 passes for 565 yards (20 yards per reception!) and a team-high 8 touchdowns.

Charles Henderson is giving up 122 yards per game on the ground. The Trojan defense is anchored up front by Sherrod Postell, a true nose tackle. The 5’10, 280-lb. senior is strong and has great feet. He has 78 tackles and is second on the team with 17 tackles for loss.

The Henderson front is solid…the linebackers are exceptional. Led by junior prospect Richard McBryde – Alabama and Auburn know all about him – the Trojan linebackers are physical and aggressive.

McBryde is a true monster. He leads the team in tackles (154), tackles for loss (35.5), and sacks (10). He can go sideline to sideline in run support and is fast enough to play in coverage. If Oneonta is going to have any offensive success, the Redskins will have to slow him down.

The Henderson secondary has picked off 27 passes this year and opposing offenses are averaging just 75 yards per game through the air.

UMS-Wright is probably the best offense that the Trojan defense has faced and the Bulldogs put up 355 yards (200 on the ground, 155 through the air) last week. However, Henderson forced five turnovers.

Oneonta has to get the running game going to set up the play-action pass. If the Trojan secondary is cheating up to help on the run, Smith and Latta could have big days on the receiving end of Powell’s tosses.

The Henderson offense features a solid quarterback and playmakers at running back and receiver.

Austin Ingram has completed 156 of 276 passes for 2239 yards with 31 touchdowns and just five interceptions. He is a very good athlete but he is not in the same class as Munford’s Monteo Garrett. Ingram is not a statue – he has 7 rushing touchdowns on the year – but he has totaled just 13 yards on the ground on 47 attempts.

Mondarius Dixon and John Johnson are a lethal combination in the backfield. Dixon leads the team with 1282 yards on 228 carries (5.6 per attempt). He has 10 touchdowns on the ground and has caught 34 passes for 443 yards and four scores.

Johnson is possibly the most dangerous player with the ball in his hand. He has 122 carries for 978 yards (8 yard avg.) and a team-high 24 touchdowns on the ground. He has caught 39 passes for 712 yards and 12 touchdowns.

Josh Noel is a big, physical receiver and he leads the Trojans with 51 receptions for 652 yards and 12 touchdowns. Kenyatta Jones has 15 catches for 209 yards and he had a 44-yard touchdown reception last week.

The Trojan offensive line is led by Hunter Kennedy, the team’s best (and biggest) lineman. This is an experienced group (five senior starters) that has been good to very good on the year. UMS held the Trojans to just 152 yards on the ground and less than 4 yards per carry but Henderson was able to grind out yards in the last three minutes of the game with Dixon basically running the same play eight straight carries.

The Redskin defense has been anchored this year by a senior-laden group that has played a ton of football.

Ethan Boyd, Thomas Boyd, Blake Bean, Keaton Jones, Brock Latta, and Terrell McDaniel have been three-year starters and have played against quality competition from Huntsville to Anniston to Tuscaloosa to Auburn.

Sophomore defensive lineman Will McKinney has 88 tackles, 22 tackles for loss, and 4 sacks.

The Redskins have done a good job against the run this year – opposing offenses are averaging just 95 yards per game – and the Oneonta run defense will be the key this week. If Dixon and Johnson are able to hammer away at the Redskin front with success then it’s going to be a long, soggy day for Oneonta.

The UMS defense did a good job against the Trojans. Henderson was aided by a short field most of the night (more on that in a moment) and the Trojan defense forced five turnovers, with one fumble recovery returned for a touchdown. However, the Henderson running game managed just 152 yards (3.9 per rush) and Ingram completed just 7 of 15 passing for 87 yards.

The Redskin secondary has held up pretty well this year. Munford’s dynamic duo of C.J. Chapman and, especially, Tavon Lawson were able to make some plays but the Redskin pass defense has been solid this season.

Of course, the best pass defense is a quarterback on the ground so the Redskin pass rush needs to keep Ingram from getting comfortable and knock him around a bit.

McDaniel leads the Redskins with four interceptions and Reid has three on the year. Oneonta has 14 interceptions and opposing quarterbacks are completing just 41 percent of their passes this season. Special teams

There will be playmakers on both sides of the field when it comes to punt and kick returns this week.

Johnson has returned 21 punts for 378 yards (18-yard avg.) and a touchdown. His longest return has been for 49 yards.

Johnson has returned 18 kickoffs for 296 yards (16.4-yard avg.) but in last week’s win over UMS-Wright it was Kenyatta Jones who had a pair of long returns, including a 67-yarder, to give the Trojans great field position.

Roberson leads the Redskins in kick returns with 13 for 392 yards (30.1-yard avg.) and three touchdowns with a long of 82 yards. McDaniel and Reid are dangerous, as well, with each averaging 21 yards per return.

Coverage teams for both Charles Henderson and Oneonta are solid but each will be tested this week.

Both Henderson and Oneonta are very good in the kicking game.

Ingram is the punter for the Trojans and he is averaging 33.5 yards per punt with a long of 52. The Trojans did have a punt snap sail over Ingram’s head last week for a safety.

Oneonta counters with senior kicking machine Tyler Short. He has punted 27 times for a 36.8 yard average with a long of 66 yards.

When it comes to field goals, the Redskins have a slight edge.

Charles Henderson head coach Mike Dean: “We are so thankful to be here. God has given us so much and we are thankful every day for what he has allowed us to do. Oneonta is so wellcoached and they play with such passion. To make it to this point three years in a row is a testament to those kids and that community. In looking at film, we’ve charted more than 120 different looks from their offense. That’s pretty much unheard of. We’ve got to do a good job of getting lined up and moving correctly when they show motion. Defensively they will be as physical and sound as anybody we’ve played this year.”

Oneonta head coach Don Jacobs: “They are big up front and their skill players are fast. Coaches that I’ve talked to tell me they have a lot of guys that should be playing on Saturdays. Their defense will blitz and come after you and cause some problems in the backfield. Their quarterback is solid and their kicking game is good. It’s exciting to once again have a chance to play for a title. This game does not determine who or what we are but this game is a reward, win or lose. These kids have worked hard to get here and this game should be fun. Everybody wants to win – I want to win. Nobody understands what we have overcome this season to get here. It’s extremely exciting and we are looking forward to it.”