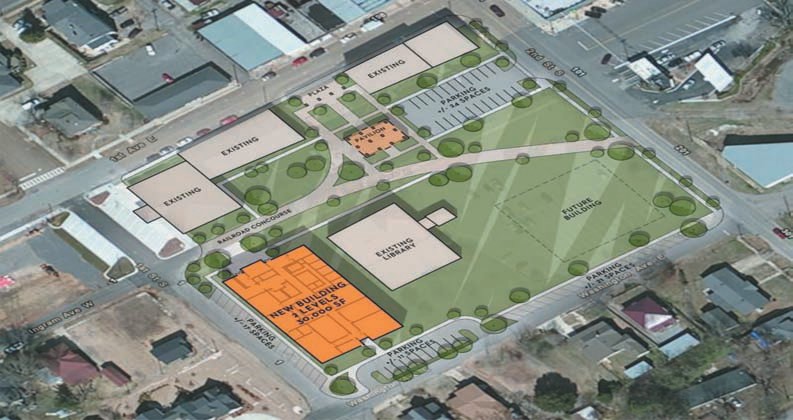 Slides reproduced above come from the Sept. 13 public hearing dealing with the proposed new Wallace State – Oneonta building. The main slide reveals the envisioned area with the present Fendley Furniture building standing directly north of the present library. Oneonta city manager – economic development officer Ed Lowe reports the city is negotiating purchase of the Fendley Furniture building and eventually envisions replacing it with a multi-tiered, amphitheater type configuration facing a repositioned pavilion. The architect’s main campus building, as depicted in the lower right restates the city’s railroad heritage and would face the senior citizen building. The city presently projects an eventual new library in the southeastern corner of the present library parking lot.

Following the latest regular council meeting, Oneonta city officials hosted a public hearing to reveal plans for a possible resized building to house Wallace State-Oneonta classes and offices. Attended by around two dozen people, many of whom were city employees, the meeting sought opinions and suggestions about the newest design and vision for the city’s western downtown area. 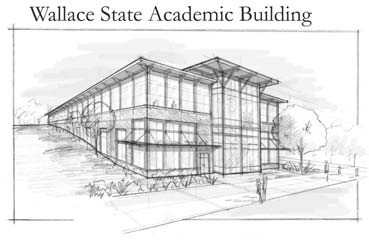 The designed building contains 30,000 square feet of space, housing Wallace State on the first floor and in about 40 percent of the second. The county’s economic development office and business incubator facilities would consume the remaining second-floor area. Both floors have ground level access through elevation at opposite end entrances.

With the city’s purchase and razing of the former Alaco building and negotiation for the former Fendley Furniture structure, Lowe envisions a large pedestrian friendly area between First Avenue and the present library site.

That vision includes a central multipurpose pavilion, restroom, catering kitchen with additional parking along a closed portion of Ingram Avenue. The plan calls for further parking along the western and southern portions of the present library block, in front of the city’s senior citizen building, and within the city property between Ingram and First avenues west. The design provides considerable green space with a pedestrian sidewalk generally following the former rail bed.

Lowe noted that Wallace State has interest in making the presumed temporary site permanent for its future technical classes. With 18,000 square feet of space available there, the total building’s capacity will approach the originally planned 50,000. He hopes to see the new structure completed by 2018, with construction underway by mid-2017.

While he and others have spoken of Wallace’s present lack of space, Wallace- Oneonta director Dr. Kelley Jones confirmed the present site will accommodate 200 students per regular class period with some 520 class seats required. College figures reflect nearly 300 students account for those 520 class seats.

Lowe said that over half of the present students come from outside Blount County. He spoke with delight at seeing students walking between nearby eating establishments and the present building.

After revealing his vision, Lowe moved to the question of costs, a topic he really did not detail. He said construction estimates run between $3.7 and $4 million, compared with the previous plan’s projected $10 million. He added that with Wallace and the economic development board, the city would have two immediate lessees.

When quizzed about leasing charges, Lowe moved away from that point, saying he did not think of the structure in that way. He added that was not how he intends to pay for the building. He never really identified a specific funding path. (While not offered at the meeting, Lowe has previously held that other local governmental bodies, state grants, and business incubator rent could reduce city obligations.)

He alluded to the development he expects to result from added downtown “foot traffic.” He and Councilman Tim McNair spoke of the potential for additional jobs and industry through the education and training Wallace can provide.

Jones spoke of a study which alleges that once the campus is at planned capacity the college will have a $4.4 million annual economic impact. That study, she said, also projects a $6 million impact during the construction phase.

In response to an audience question, Jones indicated Wallace has no intention of ending its J. B. Pennington satellite programs. She also spoke with The Blount Countian after the meeting in reference to a question posed by the newspaper.

The plans have no designated library space. Asked of that, Lowe had referred to the bookstore area and then later noted the fluidity of the specific floor plans. Jones told the reporter that in accordance with the SACS (Southern Association of Colleges and Schools) accrediting agency, college officials are in discussion with the city’s library about partial use of that facility.

For new restaurateurs present, Lowe broached the subject of garbage pickup needs in the redesigned area. He offered a couple of options with the entrepreneurs critiquing those. All agree about the inadequacy of present weekly pickup when dealing with edible scraps.

Some urged the city to act as soon as possible to implement the plans. Lowe indicated the likelihood of at least one more public hearing but emphasized the importance of moving quickly.