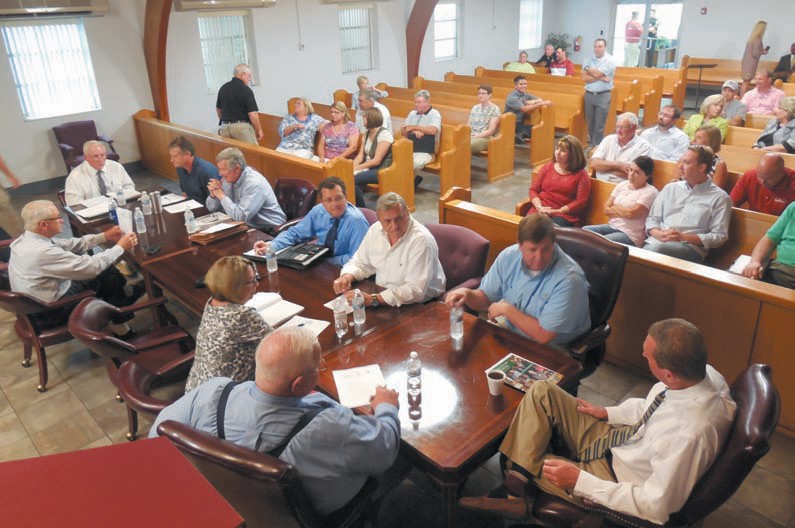 Oneonta Mayor Ross Norris, city manager Ed Lowe, and city school board member Don Maples referred to being “on the same page” as they neared conclusion of a public meeting involving the Oneonta City Council and the Oneonta City Board of Education. The July 12, post-city council meeting addressed ways to improve the city’s financial contribution to the school system.

Lowe proposed that the city provide $435,000 from its budget to the school. Maples, an accountant and former councilman, presented a financial proposal asking for a beginning $430,000.

While the Lowe and Maples numbers appear virtually the same, the board is asking that the city earmark annually 10 percent of its sales tax revenues from the prior two-year period as a school appropriation. An advantage to that formula would permit longer-range planning for both bodies and would likely provide the school board with a growing revenue stream.

Stockdale had challenged the groups to partner for the benefit of both the city and the schools. City school board president Patrick Adams initiated the substantive portion noting, “Everyone wants to see the city succeed.” He then deferred to Maples to present the board proposal.

Lowe responded with his figures, before Maples distributed a handout. The $400,000-plus figure does not represent an immediate increase of that amount for the schools.

Maples and Lowe noted that the city is already providing financial considerations to the school through debt service payments, bond interest, (alcohol) excise tax, school resource officer assistance, and a cash appropriation. Maples’s handout totaled those funds at almost $362,000 for 2016. His fiscal 2017 figures reduce that to almost $218,000 and then down to a continuing forecasted $75,000.

Based on those figures and not allowing for growth, the school would see a city appropriation increase of about $360,000 annually. The handout projects that had the school received the $430,000 in fiscal 2015, it would have moved from 133rd of 136 Alabama city and county school systems in per pupil funding to 125th.

Lowe noted the school is an integral part of the city. He reviewed specific areas the board has previously listed for funding but indicated the city would not presume to tell the board how to use the money.

Adams and Douglas listed some areas Lowe had not noted and Douglas spoke of mutual staffing and facility use among the school, the city, and Wallace State.

Councilor Tim McNair, in offering positive assessment of the framework, opined he could not see a new (city council) group cutting that appropriation. All agreed that city economic growth will provide the brightest prospects for financial security for both bodies.