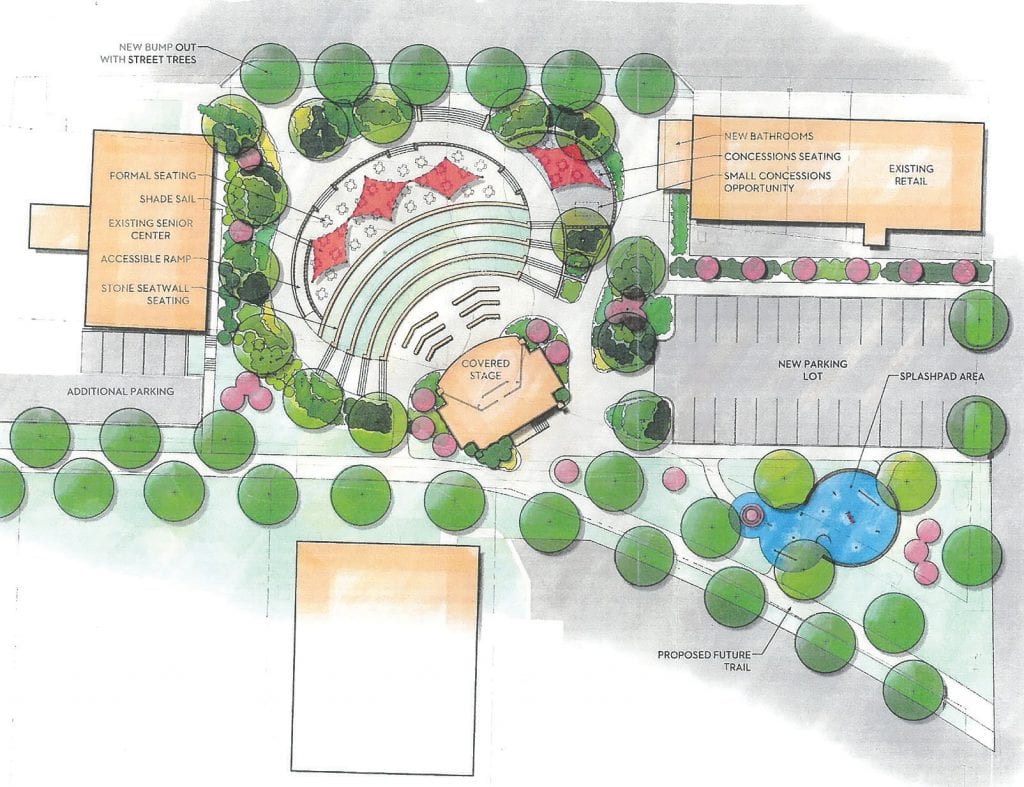 Downtown development was the topic of discussion during a work session following the last regularly scheduled meeting of the Oneonta City Council.

City manager Ed Lowe laid out his ideas and plans for downtown and the community at large during the session which lasted a couple of hours.

The concepts and renderings Lowe showed the council included the area next to the Oneonta Public Library and behind the senior center and would include a splash pad area along with an amphitheater and covered stage.

The proposed amphitheater would seat 500 people and include shade sails similar to large outdoor umbrellas.

Lowe said, “We have the capability to do it. It fits our community very well,” as he pointed out that Wallace State and local churches could use the amphitheater for productions, plays, or singings. And, he added, “We need to solicit the schools to use the facility and there would be many private uses for it. We also need to involve the seniors on a daily basis. It would have a nice picnic area also.”

He noted that in the “Downtown Revitalization – Oneonta Master Plan” there are eight segments to be considered.

1. Zoning ordinance amendments to the B-3 zone: This would allow ground and upper story apartments; remove the two on-site parking requirements for apartments; provide club and commercial parking; zoning amendments for a convenience store and indoor and outdoor entertainment; and hotel/motel and laundry service.

4. The entertainment district: Upgrades would also be defined, public meetings held with presentations to the mayor and council for approval.

6. Outdoor activity and common space plan: This, Lowe said, would require redevelopment of existing property use and define the acquisition requirement.

7. A parking, walking, and biking plan: Existing opportunities would have to be defined and property acquisitions made.

8. A future land use plan: This would require possible rezoning of surrounding properties to allow future expansion of B-3 zones.

Lowe said, “Our vision is a thriving municipality exhibiting the core values of family, community, education, and economic prosperity and our mission is to provide a distinctive and safe environment ensuring the highest possible quality of life for all.”

He said goals include providing access to comprehensive educational opportunities, improve the infrastructure to maximize Oneonta’s competitiveness, and attract reinvestment to the downtown area through revitalization and cultural enhancement.

Lowe noted, “We need to provide opportunities to better fund our departments in the future. We need to make investments to attract more revenue streams. The city has grown more than anticipated.”

Success indicators include maintaining the current high school graduation rate of 97 percent through 2021 and redevelop 20 percent of downtown by 2021.

Included in this redevelopment is a proposed Railroad Market, which includes the area on which the Christmas tree lighting/display is held and a small farmers market at one end. This area would be converted into a long, large covered area to house an actual locomotive engine for display along with a continued market.

Plans also call for redevelopment along a portion of First Avenue South and what, if any, projects might be developed on the McPherson property, north of Walmart off US Highway 75.

Lowe said the city will continue to partner with Wallace State and assist with strategic plans for future growth.

The city is once again trying to work with the Blount County Commission to make better use of the present Blount County-Oneonta Agribusiness Center. Both Lowe and councilwoman Tonya Rogers commented on the agribusiness center and the need to make it a multi-use recreational facility for Blount and surrounding counties.

Rogers added, “We will never be a manufacturing town, we have no interstate and no rail line so we need to develop a clean, small town with good neighborhoods and also invest in our police and fire departments.”

Lowe noted, “It is used so infrequently – about 60 days a year, that we need a facility to use all year.”

Funding for these projects, Lowe said, could come from bond issues, grants, partnerships, and possibly a small lodging tax. He pointed out that the city already has skilled employees who could help with site preparation.

In other matters the council: