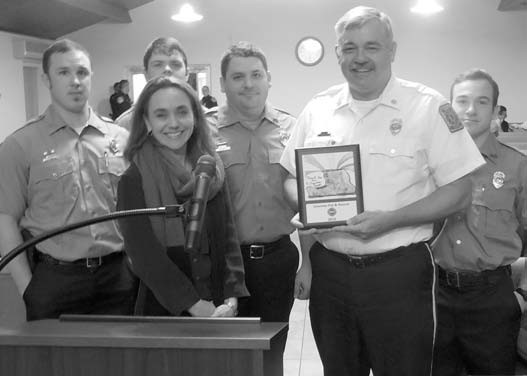 Erin Franklin, Fundraising Coordinator for the Muscular Dystrophy Association, presented a recognition plaque to the Oneonta firefighters at the city’s most recent council meeting. The department has resumed participation in the Fill the Boot fundraiser after a period of interruption. Chief Arthur Willis holds the plaque with firefighters (left to right) Josh Lozinski, Josh Gibson, Quentin Williams and Dalton Teal behind.

In a special meeting, the Oneonta City Council voted to uphold Mayor Ross Norris’s decision to dismiss city accounting employee Geneva Wall. Town clerk Tammie Noland notified the press two days prior of the scheduled Dec. 17, meeting. That meeting fell on the same evening as the rescheduled regular meeting and before an alcohol sales request public hearing. Wall had challenged her dismissal and pursued the legal option of an appeal to the entire council.

Once Norris called the meeting to order, he asked for a motion to go into executive session. The council agreed to his request, with officials later stating it fell under the permissible “good name and character” provisions for an executive session.

Wall, accompanied by her attorney, the council, Noland, city manager Ed Lowe, and city attorney Alex Smith moved to a room adjacent to the council chambers. Rodney Wall, her husband and the city’s former public works director, who had originally gone into the room, returned alone to council chambers soon after the others had departed.

After almost 40 minutes in the executive session, councilors resumed their public meeting and took action. Norris had requested a motion to uphold his actions. With what seemed a bit longer than normal wait for the motion and second, councilors voted unanimously to uphold the dismissal.

In action in the regular meeting, the council approved a county repaving project for the portion of County Highway 15 inside the city limits. Members also approved participating in the state severe weather tax holiday, Feb. 26-28.

Erin Franklin with the North Central Council of the Muscular Dystrophy Association (MDA) presented fire Chief Arthur Willis and several of his firefighters with a plaque honoring their work in joining the Fill the Boot fundraising campaign. Oneonta had failed to participate in the program for a few years but rejoined the effort this year.

As noted previously, the council had held a public hearing on permitting alcohol sales at the upcoming bull-riding competition (Jan. 8-9) at the Blount County – Oneonta Agri- Business Center. City employee and center board member Andy Alexander explained the request in both meetings. The council unanimously approved that.

Downtown business owner and beautification board member Kathy Young spoke briefly for both groups. She informed the council that, so far, no one had been nominated for the holiday decoration awards. She also chided city officials for not providing help in downtown trash clean-up. In his later comments, councilman Mark Gargus directed city workers to meet with Young and explore the downtown needs.

During councilor comments, Tonya Rogers won approval for a $36,690.53 purchase of a Chevrolet Tahoe for Willis. Lowe confirmed for the newspaper that the price was that on the state bid list. Members also approved the 2016 holiday schedule, matching the state and county and providing both Friday, Dec. 23, and Monday, Dec. 26, for the Christmas celebration.

All remaining councilors (Gargus, Rogers, Hal Blackwood, Tim McNair, and Danny Robinson) joined Mayor Norris, along with some two dozen observers for the Dec. 17 session. The council meets the second and fourth Tuesdays of each month at 5:30 p.m. in city hall for its regularly scheduled sessions.