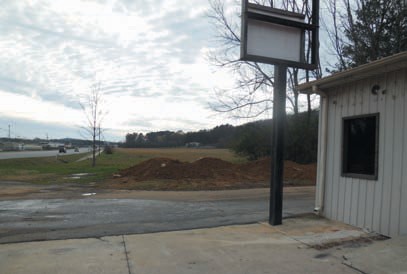 In a called, end-of-year meeting held at 7 a.m. on Dec. 31, the Oneonta City Council voted to purchase an approximately 100- acre site just beyond the city limits. The purchase price exceeds $1,225,000 spread over 20 years in biannual payments at an interest rate of 4 percent. That payment represents half the appraised value of the land with the seller taking a matching tax donation provision for the difference. The property (pictured above from an adjoining parking lot) has road-frontage along Ala 75 North, lies between The Church at Oneonta and Corpus Christi Catholic Church, and adjoins Heritage Green subdivision.

Mayor Ross Norris introduced the planned purchase, noting discussion had been ongoing for a year or more. A longtime utilities board employee, Norris explained that the land has gravity-flow sewer access, a major consideration for many developers. City attorney Alex Smith explained that any money derived from parcel sales would be escrowed to apply to the purchase payments.

Danny Robinson appeared to echo thoughts of fellow councilors in evaluating the opportunity. “I don’t know where you could find that for that price,” he said. Those comments followed his confirmation that the deal entailed no down payment and that the first payment of $44,780.79 would not come due until July, 2016. That figure expanded for the 40-payment duration translates to more than $1.79 million.

Norris offered, “We think it will pay for itself. It will be quick and easy to get additional utilities to it.” He added, later, that the sewer access there should increase the value and usefulness of adjacent property.

City manager Ed Lowe offered that he had received five different inquiries about property across from Wal-Mart, but questioners had wanted gravity-flow sewer rather than a pump-required attachment. Councilor Mark Gargus had noted, “It seems everyone wants to develop around Wal- Mart.”

Smith noted the city will obviously want to annex the property. He also advised that this provides an opportunity for the city to zone and control development of a key parcel of land.

Prior to the land deal previously announced in the special call for the meeting, councilors passed an emergency resolution declaring a natural disaster as a result of the Dec. 25-26 rains and flooding affecting the city. That declaration opens the door for the city potentially to recoup funds expended for the disaster.

According to public service director-administrator Brandon Horton, the resolution sets the stage for business owners to qualify for loans for damages they may have suffered and for which they did not receive compensation. Horton also advised the council of Hometown Market owner Randall Holloway’s gratitude to the city and other businesses for help during flooding at his business.

Councilor Tonya Rogers missed the Dec. 31 meeting, announced for council chambers. Councilmen Hal Blackwood and Tim McNair met with Norris, Robinson, and Gargus in the mayor’s conference room, along with several city employees. The council’s regularly scheduled meetings are set for the second and fourth Tuesdays of each month at 5:30 p.m. in council chambers.