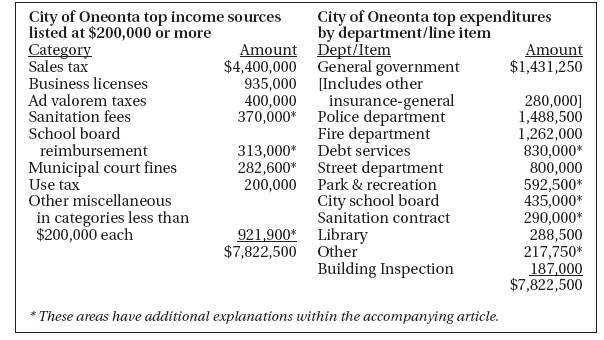 The record $7,822,500 Oneonta city budget for 2016-2017 includes an additional line item for the city’s school system. While listed as a $435,000 expenditure, the actual budgeted city outlay stands at only $122,000, since the school board reimburses the city $313,000 toward school indebtedness paid from that account.

While the budget figures do not break down total salaries as an individual category, adding together those reflected within the other categories totals $3,314,000. Other employee benefits [employer insurance contribution, payroll taxes (employer portion of social security, Medicare, etc.) and employer retirement contribution] of $1,081,500 would raise that expenditure to $4,395,500. The salary figure does not include the municipal judge ($35,000), prosecutor ($22,000), and attorney ($10,000) listed within “general government” nor any additional attorney payments which might fall under “legal fees-general” listing.

The budget projects the city’s alcohol revenues at $153,000 (shown in the table on page A11 within the miscellaneous category). The most significant portion of that comes from the alcohol beverage tax at $135,000 with the remainder at $10,000 for ABC Board tax, $5,000 from liquor sales tax, and $3,000 from liquor licenses.

While there is no complete breakdown for municipal court expenses, city manager/ economic development officer Ed Lowe has held that the court basically pays for itself. Some of its expenses are broken out in the budget’s general government category.

Under debt services, the budget adds $90,000 for the city’s annual contractual obligations for the large land tract purchased in December 2015. It also projects $100,000 for Wallace State construction during the fiscal year.

Park and recreation expenditures may be reduced by an estimated $130,000 income (in the miscellaneous category) from its sources. The budget does reflect $370,000 received in sanitation fees and $65,000 (again in miscellaneous) for the BFI franchise tax, with the waste management contract totaling $290,000 by itself.