Oneonta as it appeared in 1924 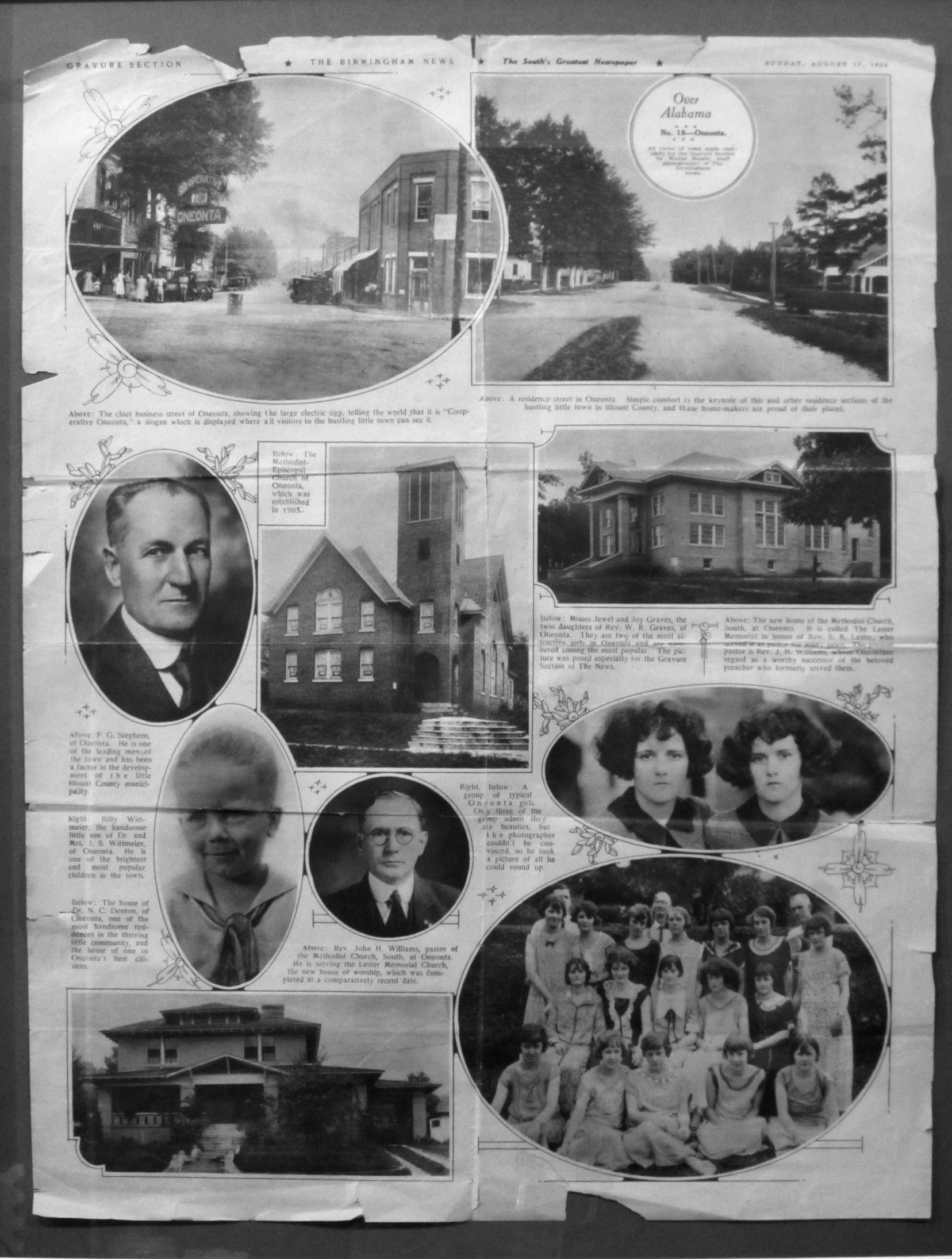 Hanging in the Memorial Museum is a yellowed but clear, framed page from the gravure section of The Birmingham News dated Sunday, Aug. 17, 1924, and devoted to Oneonta. It’s one of a series of features The News published about Alabama towns.

Claiming choice pos-ition on the page is a shot of the corner of First Avenue (Main Street) and Second Street, site of a bank building that was much later transformed into the present Regions.

Visible across the avenue is the structure at some time occupied by McPherson grocery and mercantile store. A few trees grow along two blocks of Main Street.

A picture appears of the then recently completed Lester Memorial Methodist, for a time the largest church in town. It’s accompanied by a photograph of the minister, the Rev. John Williams.

A view of about three blocks along the unpaved Third Street reflects in the background the top of the county jail, in the same location as the present one; one house among several on the street; and a row of trees, their trunks whitewashed, as was the custom then.

One picture piques the curiosity, indeed creates confusion: its photo lines identify it as the “Methodist Episcopal Church of Oneonta, which was constructed in 1905.” Surely it strongly resembles what came to be called “The Little Brick Church,” whose congregation merged with Lester Memorial’s in 1938.

Surely its unusual curved steps approaching the corner entrance look much the same. Roof lines are similar. But one of the windows contrasts sharply. And whatever happened to that tall square tower? But no. It’s not the Little Brick Church. What a disappointment. Yet the picture substitution does heighten the observer’s interest.

A number of individuals are pictured in addition to the minister. F.G. Stephens was editor-publisher of The Southern Democrat, which he established in 1894. Several pretty young women are shown, among them Jewel and Joy Graves, twin daughters of the Rev. Walter Graves. Some 17 others form a bevy of beauties, only one laying claim to the title. And Little Billy Wittmeier, who was “one of the brightest and most popular children in the town.”

The museum’s address is 204 Second Street North on Courthouse Square. Its hours are 9 a.m. to 3 p.m. Tuesdays through Fridays.