Unit by a head, district holding on, modified making move 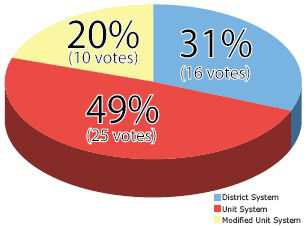 Below are results after one week of voting in The Blount Countian’s on-line poll of citizen preferences for three possible organizational systems that could be used to carry out county road maintenance in Blount County. The final report will appear in next week’s edition. Comments appear in the Readers Write section of today’s paper.

Citizens who have not yet voted in the online poll are encouraged to participate by going to the newspaper’s website at www.blountcountian.com.

•the unit system, a proposed alternative, that assigns responsibility for road maintenance to an appointed road manager county-wide, with a centralized equipment pool and part-time commissioners Vote total 25 (49%)

•the modified unit system, another alternative, that is structured like the unit system described above, but with an elected road manager instead of an appointed one Vote total 10 (20%)