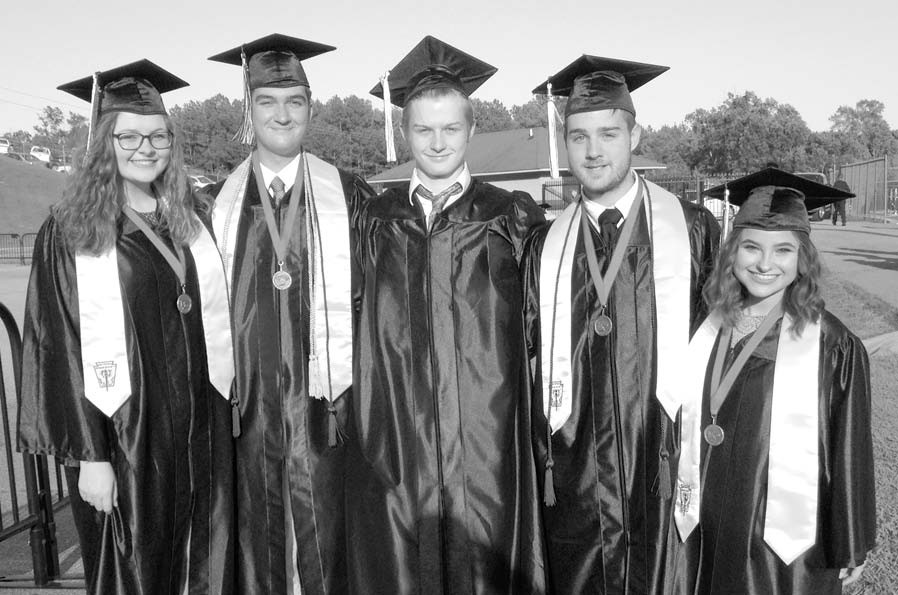 As the school year ends, five members of the Oneonta High School Band have learned they will march at the collegiate level.

Hannah Weems will become a part of the UAB Blazer band and Brandon Whitworth will join the Samford Bulldog band. Nick McMinn, Tyler Harvey, and Emily Campbell will join three previous OHS graduates as part of the “Million Dollar Band” at The University of Alabama.

The noteworthy accomplishments of these students have been achieved through practice, hard work, and determination throughout the last seven years as Redskins band members.

Weems said, “The saddest part is leaving the OHS band family, but it is exciting to join another band family.” She will join the Blazer band on a merit and band scholarship as a trumpet player.

Throughout her band career, Weems has played both the trumpet and the French horn. She was the trumpet section leader for the Redskin Band.

Weems has been an active participant in school, in the community, and at church. Some of her accomplishments include being a dual enrollment student at Wallace State Community College, member of the National Honor Society, editor of the school newspaper, member of the 2017 All-State Choir, and receiving the Congress of the United States Award of Recognition in 2016 for participation in a Bible drive.

While at UAB, Weems plans to major in communications and hopes to work for a non-profit ministry after completing college.

Weems is the daughter of Brandon and Christy Weems.

Brandon Whitworth will become a part of the Samford Bulldog Band as a tuba player. He has received several band scholarships that will financially assist his college experience.

Whitworth was low brass section leader for the Redskin Band and was named as a 2016 and 2017 All-State tuba player. He plans on majoring in music education.

Believing that people should set personal goals and take advantage of every opportunity, Whitworth said, “If you have a goal, go for it and don’t let anything stop you.”

Whitworth is the son of Janine Bond.

Attending Alabama on both an academic and an alumni scholarship, Nick McMinn will join the “Million Dollar Band” as a marching cymbal player. He plans on majoring in aerospace engineering with aspirations of working in missile defense.

McMinn served as the percussion section leader this year and is a charter member for the Southern Knights Drum and Bugle Corp. He is a National Honor Society member, serves as a Big Brother/Big Sister, is a member of Mu Alpha Theta, was 2017 Oneonta soccer captain, and served as vice president of the Future Business Leaders of America.

As he reflected on how blessed he is, McMinn said, “I want to thank God for my talents and abilities as I have now been given more opportunities to use my talents as I set out on another path.”

McMinn is the son of Michael and Tammy McMinn.

Joining McMinn as part of the “Million Dollar Band,” will be trumpeter Tyler Harvey. Harvey has served as trumpet section leader for the last two years and was a Redskin band captain.

Harvey is a firm believer that people should not give up on their dreams. He said, “Don’t let anyone tell you that you can’t. With God’s strength you can keep going.”

As a dual enrollment student at Snead State Community College, Harvey will enter Alabama with 12 college credit hours completed as he pursues an accounting degree. He has future plans of becoming a youth minister in addition to becoming an accountant.

He is the son of Mike and Connie Harvey.

Clarinet player Emily Campbell is the final Redskin Band member thus far to join the “Million Dollar Band.” For the last three years, she has served as the drum major for the Redskin Band.

Regarding this invitation, Campbell said, “Being accepted into the “Million Dollar Band” is such an honor and I am so thankful to continue being a part of something I am so passionate for.”

Planning to major in nursing, Campbell has dreams of moving to New York City after obtaining her degree. She anticipates furthering her education once she moves north.

Campbell has been a member of the Oneonta music and drama program for four years, as well as community theatre. She was a member of the All-State SSA Choir the last two years.

She is the daughter of Phillip and Francine Campbell.

Congratulations to these students as they begin a new journey that will offer them a lifetime of memories.