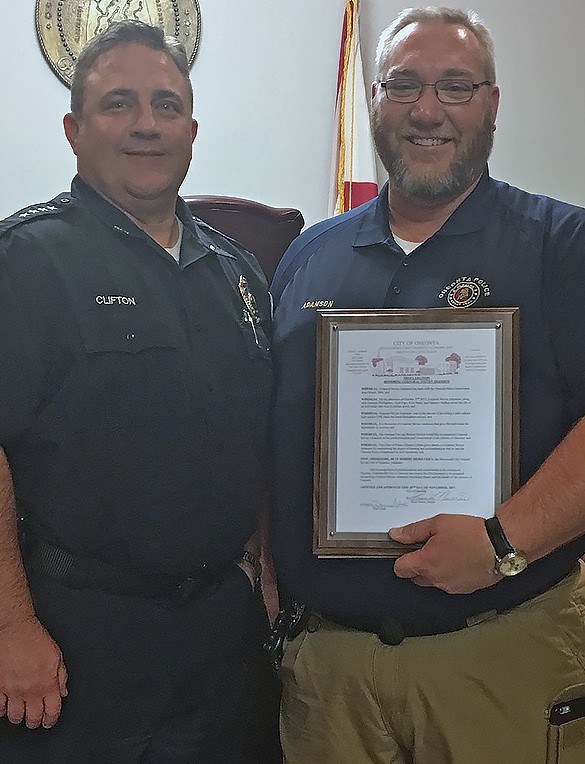 It started out just as an ordinary workday for Oneonta Police Department’s Cpl. Steven Adamson (at right, with Chief Charles Clifton). He was prepared to handle any emergency situations during his 12-hour shift.

Little did Adamson know what an important role he would have that day in saving someone’s life.

During his shift, Adamson heard Blount County 911 dispatch Oneonta Fire and Rescue to Tractor Supply due to an unresponsive patient. Adamson also responded and arrived first on the scene. He immediately assessed the patient.

According to Adamson, the man had no pulse and was not breathing. He began administering CPR while EMS personnel Kyle Dodd, Patrice Mulkey, and Zach Page were enroute.

Once EMS arrived on the scene, they also assessed the patient, who was determined to be in cardiac arrest, specifically ventricular fibrillation, or V-Fib.

It was later determined that the man had pneumonia, which caused him to go into cardiac arrest. When he fell on the concrete, he hit his head, and had two brain bleeds as a result of the fall.

Medics told Adamson that due to the severity of the situation, the man likely would not have survived had CPR not been immediately initiated.

This is not the first time Adamson has been able to utilize his CPR training. In fact, this is the third time he has used this lifesaving technique since returning to OPD in March 2004. In the previous cases, Adamson said the patients were breathing and talking once CPR was administered. Defibrillation was not necessary.

Adamson said, “I would like to say that I appreciate the city’s recognition, but I don’t want the men and women of our great fire department to go unrecognized. God numbers our days when we are born. It was not that man’s time to go home, and God used me as a tool. I am blessed that he used me to do his work.”