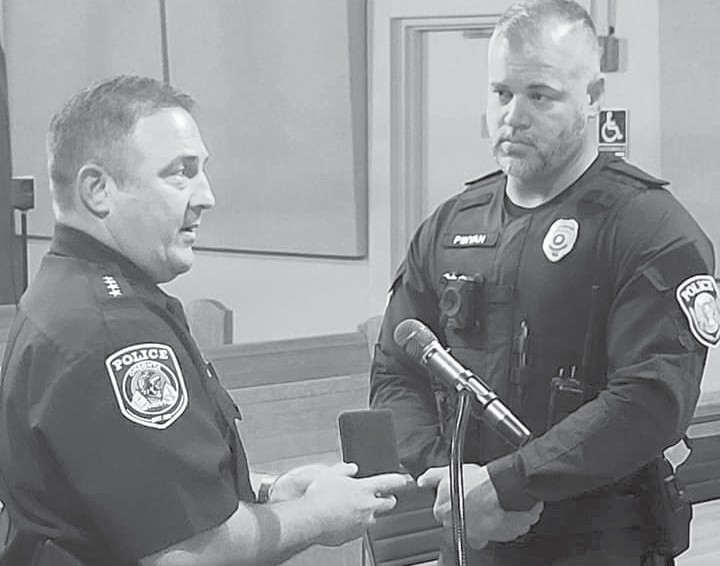 The Oneonta City Council recognized the Oneonta Police Department and honored officers Ryan Pinyan and Jonathan Dempsey “for their commitment and heroic actions while on duty.”

On Oct.1, while eating lunch at Stephen’s Diner, Pinyan performed the Heimlich maneuver on an individual. After two attempts, he was able to effectively recover the distressed individual from the incident.

The individual then emailed Oneonta Police Chief Charles Clifton a letter of sincere gratitude, commending Pinyan on his life-saving efforts. Clifton also praised him for his degree of professionalism and execution of his training, which the Oneonta Police Department represents. The council passed a proclamation which was adopted and approved on Nov. 23 in honor of Pinyan.

That same officer was also sought out by another resident who wished to thank him for his assistance. The resident’s son had been having trouble navigating a ticket he’d received and Pinyan made the process very easy.

In another instance, Dempsey and Sgt. Jimmy Baldwin were called to the scene of an accidental, self-inflicted gunshot wound. Upon assessing the situation, Dempsey immediately sprang into action and applied a tourniquet to stop blood loss.

The two officers were able to call for an emergency transport and the victim was airlifted from the scene. Clifton stated, “Dempsey’s actions were paramount in maintaining consciousness and in receiving info about the incident.”

In other business, the council:

The Oneonta City Council meets the second and fourth Tuesday of each month. The 6 p.m. meeting is preceded by a 5:45 p.m. work session.