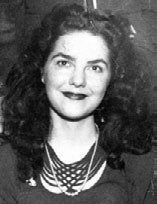 If there appears to be a disagreement among family
members about information to appear in an obituary,
The Blount Countian reserves the right to decline to
publish any of it. The newspaper takes pride in not
charging for publishing obituaries except for those of
persons without direct connection to this county, and
those requested to be published as submitted but not following

PAMELA DENICE BAILEY, 50, of Susan Moore, died Jan. 20, 2010, at TLC Nursing Center long after an accident left her incapacitated. Before the accident, she had worked as a veterinarian assistant at Boaz Animal Hospital. A native of Blount County, she was a member of Susan Moore class of 1978 and Snead Baptist Church. Her father, O.H. “Hollywood” Goble, predeceased her.

MARY LOUISE EDWARDS, 80, of Oneonta, died Jan. 21, 2010, at TLC Nursing Center. Born in Birmingham, she was the daughter of the late Wiley and Opal Rakestraw Weems. Said to have been a loving mother and grandmother, she worked 18 years as a waitress at Andrews Bar-B-Que in East Lake and was a member of Lord’s House of Prayer. Predeceasing her, in addition to her parents, were son Rusty Underwood; daughter Edrena Underwood; four brothers and sisters.

JOSEPH DANIEL FLOYD, 28, of Remlap, died Jan. 21, 2010, at Ashville. A native of Kentucky, he was the disabled son of Eddie (Beth) Floyd of Remlap and Kathy Johnston (Pat) Hoagland of Arab. His grandmother Retha Floyd predeceased him.

EDDIE MAE KENT, 84, died Jan. 11, 2010, at her Horton residence. An Alabama native, she was the daughter of the late Edd Barot and Marie Elizabeth Smith and the widow of James Edward Kent. Siblings predeceasing her were Artie Smith, L.T. Smith, H.I. Smith, Ruby Foster, Odell Sheffield, and Velma Goode.

KATHERIENE BUTTS NIX, 83, a resident of Gulf Shores, died Wednesday, Jan. 20, 2010. Born July 31, 1926, in Birmingham, she attended Woodlawn High School and later attended Mobile College. She considered one of her greatest achievements as winning an art contest in 1973 and receiving a cash award and certificate from Gov. George Wallace. She taught art and won many art ribbons when she and her husband owned K&B Art Studio in Oneonta from 1979 to 1983. She spent the last several years as a resident of Gulf Shores and was a member of the First Baptist Church there. Predeceasing her were mother Leola Williamson, father Claude R. Butts, and identical twin sister Loriene Rice.

WILLIE JAY FORE RAGSDALE, 91, died Jan. 18, 2010. Born Jan. 4, 1919, in Steele, she lived most of her life in Blount County. She was a member of Pine Grove United Methodist Church and was active in church work there for many years. Family members says she loved music, sewing, working in her flower and vegetable gardens, taking long walks, and reading. After moving from her farm to Magnolia House in Oneonta, she continued her daily long walks and was an avid reader until the last year of her life. Predeceasing her were parents Jim and Geneva Barnes Fore; husband Rev. Otto Ragsdale; sons Joe and Steve Ragsdale; daughter Dorothy Gilliland; brother Johnny Fore; sisters Edith Vines and Imogene Laughlin; daughter-inlaw Marjorie Ragsdale.

PATRICIA “PATTIE” CHAMPION SMITH, 50, died Jan. 20, 2010, at her residence in Blountsville. Born in California, she was the daughter of Herman and Rebecca Scrivner Champion of Georgia and the wife of Jeffery D. Smith. A former member of the U.S. Navy, she had worked as a restaurant waitress and was a member of Antioch Baptist Church in Blountsville.

TRENTON ADAM STEWART, 84, died Jan. 24, 2010. Born July 31, 1925, he was a lifelong resident of Oneonta. He graduated from Blount County High School and served in the U.S. Navy from 1944 to 1946. A faithful member of Union Hill Baptist Church, he served in numerous leadership positions and was a deacon more than 50 years.

Mr. Stewart founded and operated Stewart Dairy for 41 years. He consistently had one of the highest-average producing dairy herds in Alabama and was a pioneer in the use of genetic techniques for herd improvements. He served many years on the Blount County Farmers Federation board of directors, including several terms as president; was state director of Alabama Farmers Federation; was a longtime member of Lions International; and was active in his community.

LILLIAN ELIZABETH THOMAS, 87, of Oneonta, died Jan. 19, 2010, at St. Vincent’s Blount. A native of Blount County, she was the daughter of the late Wiley Monroe and Linny Elizabeth Glasscox Partain and the widow of Dewey Edward Thomas. Predeceasing her in addition to her parents and husband were brothers W.M. Partain and Alton Partain and sisters Francis Sanders, Sue Potter, and Sarah Lynn Partain.

JAMES VERDELL “RED” THRASHER, 80, of the Shady Grove community in Guntersville, died Wednesday, Jan. 20, 2010, at his residence. Born Aug. 22, 1929, in Blount County, he was the son of the late James Chalmers and Carrie Marie Coker Thrasher. A graduate of J.B. Pennington High School, he was a retired sheetmetal worker and a member of Shady Grove Baptist Church and Arab Masonic Lodge #663.