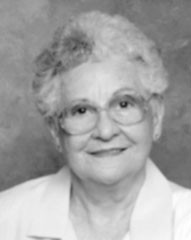 If there appears to be a disagreement among family
members about information to appear in an obituary,
The Blount Countian reserves the right to decline to
publish any of it. The newspaper takes pride in not
charging for publishing obituaries except for those of
persons without direct connection to this county, in
which case persons requesting them will pay for them
when they are submitted.

WILLIE C. ADCOCK, 81, of Oneonta, formerly of Nectar, died Dec. 3, 2009, at St. Vincent’s East. A native of Blount County, she was a member of Nectar United Methodist Church and had retired as a bookkeeper with Collateral Investment. Predeceasing her were parents William L. and Gertie Hudson Adcock; brothers Howard and Max Adcock; sister Pauline Copeland; nephew Bill Adcock.

As a charter member of Alpha Theta chapter of Alpha Delta Kappa honorary teachers sorority, she worked to promote better education for all students, not just those in her care. She served as the second president of the Alpha Theta chapter as well as many other positions of leadership. She became a Golden Sister in February 2009 when Alpha Theta celebrated its 50th anniversary.

Because education was so important to her, Mrs. Clegg worked to support the Blount County Education Foundation from its very beginning. Whether it was making peanut butter cookies for the radio-thon, helping set up for workshops, or making a monetary donation, she was always ready and willing to serve.

Mrs. Clegg was a member of Blountsville United Methodist Church and served in many positions of leadership. She was an active member of her Sunday school class and the United Methodist Women. The children and youth of the church could always count on Mrs. Clegg to support them in all their projects.

Mrs. Clegg was a member of the Sycamore Club and enjoyed the fun and fellowship of each meeting.

As a graduate of the University of Alabama, Mrs. Clegg loved Alabama football, tailgating with family and friends in Tuscaloosa through the 2008 season. This year she tailgated in her room at Fair Haven Retirement Center.

Visitation was Thursday, Dec. 3, from 5 p.m. to 8 p.m. at Lemley Funeral Home in Oneonta. Funeral service was Friday, Dec. 4, at 2 p.m. at Blountsville United Methodist Church. The Reverends Don Neal, Bart Bowlin, Bert Goodwin, and Daryl Holt officiated. Her body lay in state from 1 p.m. to 2 p.m. prior to the funeral. Interment was at Hill Crest Cemetery in Boaz.

– requested as is and paid for by family members

RACHEL MARIE LAKE, 19, of Hayden, died Dec. 2, 2009, in an accident on state highway 160. Born in Jefferson County, she was the daughter of Steven Eudean Lake and Charlotte Sparman. She was a student and a carrier for The Birmingham News.
The family says her hobbies were her eight dogs, music of all kinds, and working with her hands.

MARY SUE BLAKE NESMITH, 87, of Ashland, formerly of Blountsville, died Dec. 1, 2009, at Clay County Nursing Home in Ashland. A native of DeKalb County, she was the daughter of the late Isaac and Renna Dumas Blake. She was a member of Ashland First Baptist Church and had worked at Lynn’s 5 & 10 Store in Blountsville. Predeceasing her, in addition to her parents, were husband L.D. NeSmith; brothers Wilfred Blake, Ronnie Blake, Hugh Prater Blake, and Seab Blake; sister Freda Smith; grandchild Charles Ray “Chuck” Presley; great-grandchild Benjamin Andrew Martin.

PEGGY MARIE JONES REID, 79, died Thursday, Dec. 3, 2009, at the Attalla residence after battling Alzheimer’s. Born and reared in Locust Fork, she was the daughter of the late Edward Sayle and Francis Elizabeth Merritt Jones. She attended Locust Fork High School and Howard College. She and her husband Ralph M. Reid lived many years in Oneonta and were active in politics during the 1970s when Mr. Reid served as a state legislator. They pastored in many north Alabama Baptist churches, including North Highland, Chandler Mountain, and Bob Locke. Her family says Mrs. Reid loved to read, was an avid music lover, and periodically played piano at Bob Locke Baptist Church. She was an animal lover and had two miniature dachshunds, Prissy Boo and Princess, and eight younger dogs when she died.

IMOGENE WILLIE SPRADLIN, 95, of Snead, died Dec. 4, 2009, at Golden Living Center in Oneonta. A Blount County native, she was the daughter of the late Willie and Callie Sims Franks and the widow of Harley J. Spradlin. Also predeceasing her were daughter Glenda Helms and sons Carnell and James Spradlin.

JIMMY B. STANDRIDGE, 67, of Oneonta, died Nov. 30, 2009, at St. Vincent’s Blount. A native of Blount County, he served in the U.S. Coast Guard and had retired after more than 30 years with Tractor & Equipment in Birmingham. Predeceasing him were parents Dewey Monroe and Minnie Mae Brown Standridge; brothers Talmadge, Howard, Euel, and Nicky Standridge; sisters Lottie Hamby, Patsy Bailey, and Dolly Standridge.

RILEY TIDWELL, 82, of Hanceville, died Dec. 1, 2009, at Cullman Regional Hospital. A native of Blount County, he was the son of the late Argia Wann and Annie Myrtis Ragsdale Tidwell. Others predeceasing him were daughter Dianne Tidwell; six brothers; and three sisters. He was a member of Walter Baptist Church and Cullman County Cattlemen’s Association and had worked more than 35 years at Jim Walter Resources.

ETHEL MARIE HORTON WYNN TURNER, 83, of Nectar, died Dec. 3, 2009, in Jefferson County. She was a member of High Rock Congregational Methodist Church and Nectar Seniors Center and loved crafting, quilting, crocheting, and embroidery. Born in Jefferson County, she was the daughter of the late William H. and Mary Best Horton and the widow of Mervin Wynn and Woodrow “Chub” Turner. Others predeceasing her were brothers Oscar, Ossic, Orben, and W.H. Horton Jr. and two great-great-grandchildren.

PATSY IRENE DOWNS WRIGHT, 66, of Nectar, died Dec. 6, 2009, at her residence. A member of Trinity Baptist Church, she was the daughter of Gladys Irene Bell Downs and the late George Madison Downs. In addition to her father, she was predeceased by granddaughter Emily Bryan. Her hobbies were reading, playing with her grandchildren and great-grandchildren, and spending time with her mother.