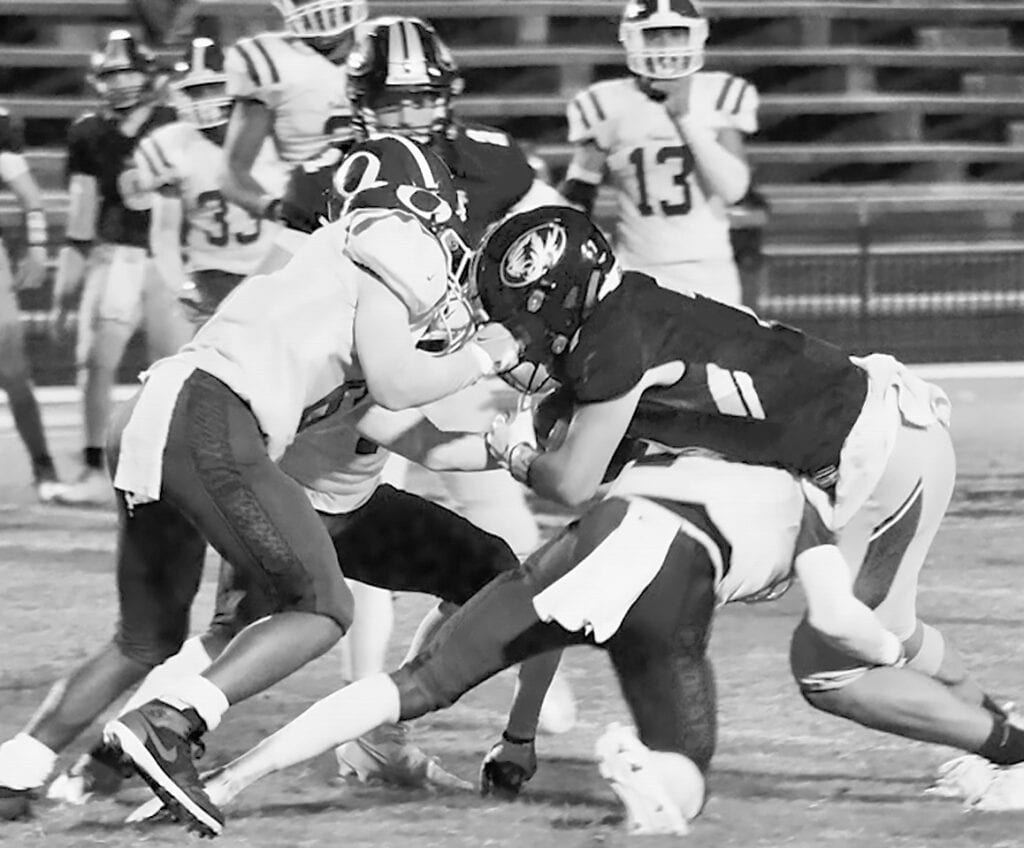 Sawyer Heptinstall is taken down by Oakman Wildcats. Heptinstall had 11 catches for 132 yards in the hard-fought overtime loss.

It was a heartbreaker for the J.B. Pennington Tigers Friday night as the Oakman Wildcats won 27-24 in overtime. Both teams played a hard-fought game, leaving everything out on the field. Only one team, however, could come away victors, and that team was Oakman.

Momentum continued for the Tigers into the second quarter when Hayden Floyd connected with Sawyer Heptinstall on a 33-yard touchdown pass. Serrano’s kick was true to give Pennington a 14-7 lead heading into halftime.

Both teams played great defense for most of the third quarter. Pennington drove down to Oakman’s 10 yard line. A tipped pass from Hayden Floyd miraculously landed in the arms of Kaedyn Marchbanks who returned the interception 94 yards for the pick six. Oakman missed the kick but narrowed Pennington’s lead to 14-13.

To begin the fourth quarter, Pennington maintained possession of the ball for a long, eight-minute drive that culminated with Williams’ second touchdown of the game on a 5-yard run. Serrano’s kick was good making the score 21-13. Oakman took possession of the ball with only 2:38 on the clock. They were able to convert two fourth-down plays before scoring on a 12-yard pass from Baylor Odom to Denzel Chatman with only 12 seconds remaining in the game. The Wildcats converted on the two-point play with another Odom to Chatman connection to send the game into overtime.

In overtime, Pennington had possession first. They got to the 4 yard line in three downs. After coming up short for the first down, the Tigers settled for a 22-yard Serrano field goal giving them a 24-21 advantage. The Tigers’ defense stymied the Wildcats on the first three snaps, but Odom connected with Chatman in the back of the end zone on fourth down for the winning score.

Williams had a tremendous game for the Tigers, both offensively and defensively. He had 94 yards rushing on 19 attempts with two touchdowns. He also had 13 tackles (six for a loss) and a sack. Chris Allred had another great defensive game for the Tigers finishing the night with eight tackles (four for loss). Dawson Tinker contributed eight tackles and Parris Malone had seven. The Tigers’ defense only allowed 201 yards compared to the 339 yards that the Pennington offense gained. Heptinstall had 11 catches for 132 yards and a touchdown to lead the offensive attack.

The Tigers fall to 3-4 on the season and 2-1 in region play. They travel to Cleveland for a non-region rivalry game this week. Kickoff is at 7 p.m.