ready to go or hurry up and wait some more? 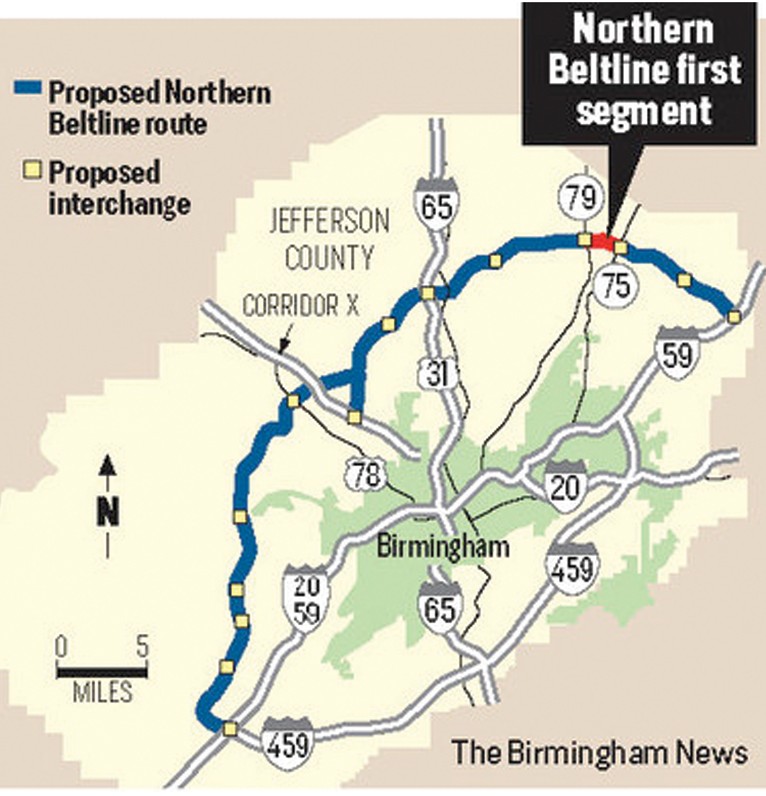 Construction on the first segment of the Northern Beltline was approved last week by the U.S. Army Corps of Engineers.

Gov. Robert Bentley announced work on the first segment of the northern loop will begin in 2014. The entire bypass will be a 52-mile loop across northern Jefferson County, connecting I-59 north of Trussville to I-20/59 southwest of Bessemer. The first segment is a 1.34-mile stretch between Ala 75 and Ala 79, situated about two miles south of and roughly paralleling the Blount County line.

To date, 41 governing bodies, including the Blount County Commission, have adopted resolutions supporting the highway.

A 2010 study by The University of Alabama estimated that constructionrelated activity would directly or indirectly create about 70,000 jobs, along with nearly 21,000 “post-build” jobs. A significant number of those jobs are expected to be filled by Blount County residents.

Two days after the Governor’s announcement, the Black Warrior Riverkeeper and the Southern Environmental Law Center issued the following opposing statement: “Although supporters of the controversial $5.4 billion Northern Beltline held a press conference this week to announce upcoming construction, the reality is the status of the project remains uncertain due to significant concerns about its environmental impacts and costs to taxpayers.”

The statement continued, noting that the $160 million appropriated may not be enough to cover even the first segment, that there is no dedicated funding source for the remainder of the project, and that it is jeopardized by an ongoing federal lawsuit (alleging that an analysis of more effective alternatives to it have not been studied, as required by law).

The Blount Countian asked Commission Chairman Chris Green, from his vantage point on the Regional Planning Commission’s board of directors, to comment on the project’s status.

How would he rate the significance of the whole project to Blount County, especially over the next five years?

“As we’ve said all along, I anticipate it will facilitate continued economic growth – residential, retail, and industrial. Blount County’s challenge is to be ready from the standpoint of infrastructure to handle it as it comes. We need to be working on all aspects of infrastructure. The water authorities are already working to meet expanded water needs the beltline will hasten in the southern part of the county. We need upgrades on county roads all over the county, but along the southern boundary, we don’t have as many farm-to-market type connectors as in some other areas. We’ve got a lot of small, prescriptive-use-type roads crisscrossing that area. They’re inadequate even now, and they’ll need to be upgraded in order to handle increased traffic from the beltline.”