No ifs, ands, or bunts about it 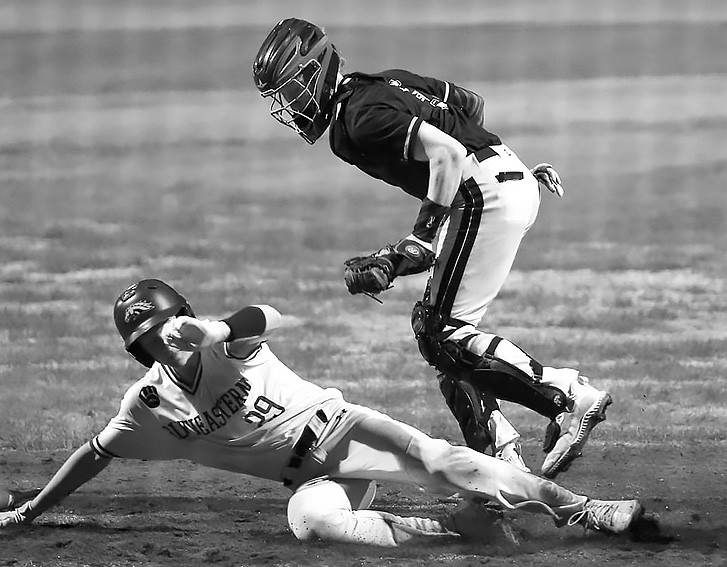 Cleveland catcher Jacob Johnson tags Southeastern’s Hayden McMichael out at home in the bottom of the second inning to keep the Mustangs scoreless. -Jeff Sargent

The Eagles continue to soar with a sweep of Gaylesville in Thursday’s doubleheader. They took game one 17-4 and game two 19-3 to open up area play 2-0. With the two wins, the Eagles are now 11-1.

Chase Payne scored four runs and drove in five on two hits to lead Appalachian past Gaylesville. He hit a three-run home run in the second inning and a two-run bomb in the fourth. Appalachian scored two in their first at bat, but Gaylesville answered with two runs in the top of the second. The Eagles pulled away in the bottom of the inning, adding seven runs. They posted two more in the third and another six in the fourth. 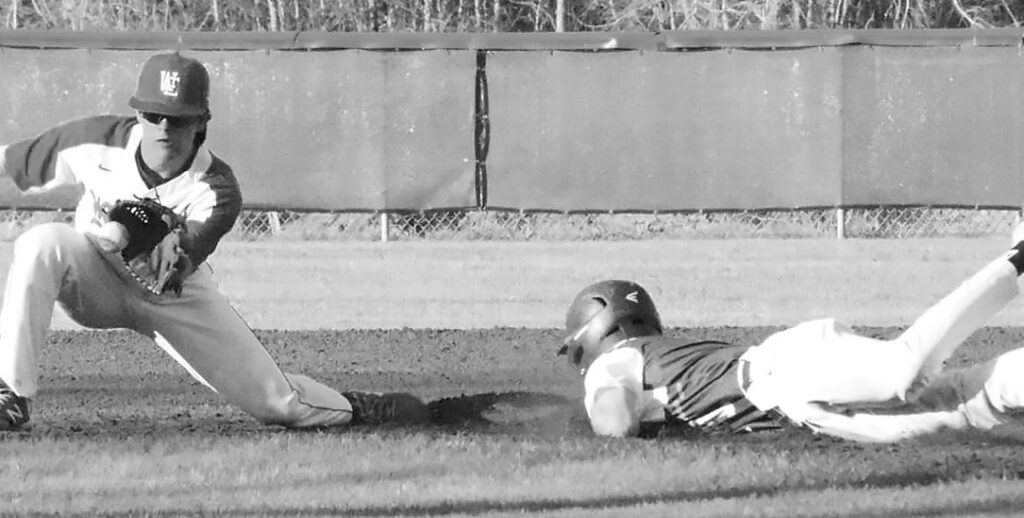 Payne started for the Eagles, striking out 12 in four and one-third innings. He gave up four runs on three hits. Harvey closed the game, pitching two-thirds of an inning. He allowed zero runs and zero hits.

In game two, the Eagles scored 19 on 19 hits to secure their 11th win and move to 2-0 in area play. They scored 10 runs in their first at bat, adding six in the second, two in the third, and one in the fifth. Brandon Atkinson got the win, allowing two runs on five hits. He struck out five in three innings. Martin gave up one run on one hit in his only inning on the mound, and Conner Green didn’t allow any runs or hits in one inning.

Payne and Jones led the Eagles at the plate with two RBIs and four runs on four hits. Helms, Heekin, and Atkinson all finished with two hits. Heekin and Atkinson each drove in two runs while Helms drove in one. Helms scored twice and Heekin once. Seawright finished with one hit, two runs, and two RBIs; Brady Stutts and Moore each had one hit; Harvey and Tucker had one hit, one run, and two RBIs; Snow and Talan Shirley each scored two runs; and Baswell knocked one runner in.

After a short break, the Eagles are scheduled to hit the field again tomorrow, at 11 a.m., at Jacksonville Christian. They host Douglas Friday, at 10 a.m.

The Tigers put on a show for the home crowd last Thursday, scoring a combined 45 runs on 33 hits in a doubleheader with area rival Holly Pond. They took game one 14-4 and game two 31-4.

The Tigers’ big night started with four runs in their first at bat. They added four in the second, four in the third, and two in the fifth. Jesse Amos was 3-for-3 to lead the Tigers at the plate. He scored two runs and knocked in three.

Bauman got the win. He pitched five innings, allowing four runs on six hits while striking out five.

The Tigers scattered 21 hits in game two. Four hits from Murphree helped lead the way. His double in the first inning brought in the game’s first run. They totaled three runs in the first, six in the second, seven in the third, and 15 in the fourth.

Jaxon Timmerman finished 2-for-3, scored five runs, and brought in one. Bauman had one hit, three runs, and three RBIs; Heptinstall scored four on one hit with three RBIs; Conner Timmerman had three RBIs; and Jaxson Branham scored two while Jake Dingler and Isaac Lara each scored one.

Colton Walston got the win going two and two-thirds innings, allowing four hits and zero runs while striking out four. Jaxon Timmerman started the game, allowing two hits and three runs over one and one-third innings. Amos threw one inning of relief.

Last Thursday, Locust Fork swept West End on the road in a doubleheader for big area wins. They are 3-5 overall, 2-1 in area. In game one, the Hornets snagged a late lead in their 5-3 win. In game two, they scored 19 runs over the final two innings to take the lead in their 26-10 win.

Landon Keith went 3-for-4 with one run and one RBI to lead the Hornets at the plate. Michael Mullins finished with two hits. J.M. Whitehead, Pearce Kniep, Sean Harper, Isaiah King, and Matthew Mitchell each finished with one hit. Kniep recorded two RBIs with Coleman Williamson and Mitchell recording one apiece. Tyler McCay, Kniep, King, and Mitchell scored the other four Hornet runs.

Whitehead started on the mound, lasting five and two-thirds innings. He struck out 13 and allowed zero hits, but the Patriots scored three. King and Keith closed the game.

Locust Fork took an early lead in game two, but West End evened the score after three innings. After another lead change in the fourth, Whitehead broke the game open in the top of the fifth with his bases-clearing triple. The Hornets scored seven on seven hits for a 14-9 lead. They scored 12 in the sixth to take the series.

Whitehead led the Hornets at the plate with five hits in six at bats, two runs, and nine RBIs on two singles, a double, and two triples. Kniep went 4-for-4 with four RBIs and five runs. Keith and Mitchell each scored five runs on three hits with Keith recording four RBIs and Mitchell two.

Mullins lasted two innings on the mound, allowing four hits and five runs. King, Zach Watts, Melvin, Keith, and Kniep all pitched in relief. King gave up one hit and three runs while Watts and Keith each allowed a run.

After the break, they resume play on the road at Oneonta Monday, March 28. Game time is 4:30 p.m.

After falling to Hayden on a walkoff run Monday, Oneonta hosted the Wildcats Thursday. The Redskins scored three in their first at bat to take the lead. Hayden posted two runs in the top of the third to close the gap, but Oneonta put four runs on the board in the bottom of the fourth. The Redskins held on for the 7-3 win.

Luke Hodge got the win, lasting seven innings. He allowed three runs on seven hits and struck out eight. Sammy Collins started on the mound for the Wildcats. In four innings, he surrendered seven runs on five hits with four strike outs. Luke Renfro pitched the final two innings, allowing just one hit and no runs with three strike outs.

Oneonta hosts Locust Fork next Monday, at 4:30 p.m. Hayden is in Gulf Shores this week for the annual Gulf Coast Classic.

The Mustangs and Panthers split last Thursday’s doubleheader; Southeastern’s win earlier in the week gave them the series win for a 2-1 record in area play. The Panthers are 1-2.

In game one, Southeastern jumped out to an early lead and held on for the win. Both teams scored two runs in their first at bat, but the Mustangs posted three runs in the bottom of the second to go up 5-2. Southeastern added another run in the bottom of the fifth and the Panthers’ seventh inning rally produced just two runs giving the Mustangs the 6-4 win.

Will Davis collected the win for the Mustangs. He pitched five innings, surrendered two runs on five hits, and struck out five. Drew Hicks and Gabe Marsh pitched in relief. Hicks gave up two runs on three hits in one and one-third inning.

Brody Gibson started for Cleveland. Pitching six innings, he gave up 10 hits and six runs and struck out nine.

Jacob Johnson led the Panthers at the plate. He went 3-for-4 with one run and one RBI. Will Faust, Brody Gibson, and Ace Kon each finished with two hits. Faust scored two runs while Gibson added two RBIs. Jaxon Glass finished with one hit and one run while Karter Adams and Brayden Painter each recorded one hit.

In their second game, Southeastern almost erased a five-run deficit, but Cleveland held on for the 5-4 win. Cleveland took a 1-0 lead in their first at bat and scored four in the top of the third for a 5-0 lead. Southeastern finally got on the board in the bottom of the third and scored two more in the fourth to get within two. Dylan Abbruzzo’s two-out steal of home in the bottom of the seventh got the Mustangs within one, but Cleveland got the final out to secure the win.

Both Faust and Adrian Zavala finished with two hits to lead the Panthers at the plate. Faust also scored a run. Glass, Johnson, Gibson, and Luke McDowell each had a hit. Glass and Gibson each scored one and had one RBI while Johnson scored two runs.

Taking the loss for the Mustangs was Ty Hancock. He allowed three runs on four hits in two and one-third innings. Ryder Stewart, Jackson McMillian, Drew Hicks, Gabe Marsh, and Jericho Pendleton all pitched in relief. Stewart and McMillian each gave up one run.

Hall went 3-for-4 with one run to lead Southeastern at the plate. Carpenter finished with two hits and one run; Hicks and Abbruzzo each scored one run; and Davis and McMichael had one hit apiece.

The Mustangs are 12-4 overall and tied with Locust Fork for the top spot in area play. After doubleheader losses to Piedmont Saturday and Oneonta Monday, the Panthers dropped to 6-11 overall. They are tied with West End in area play.