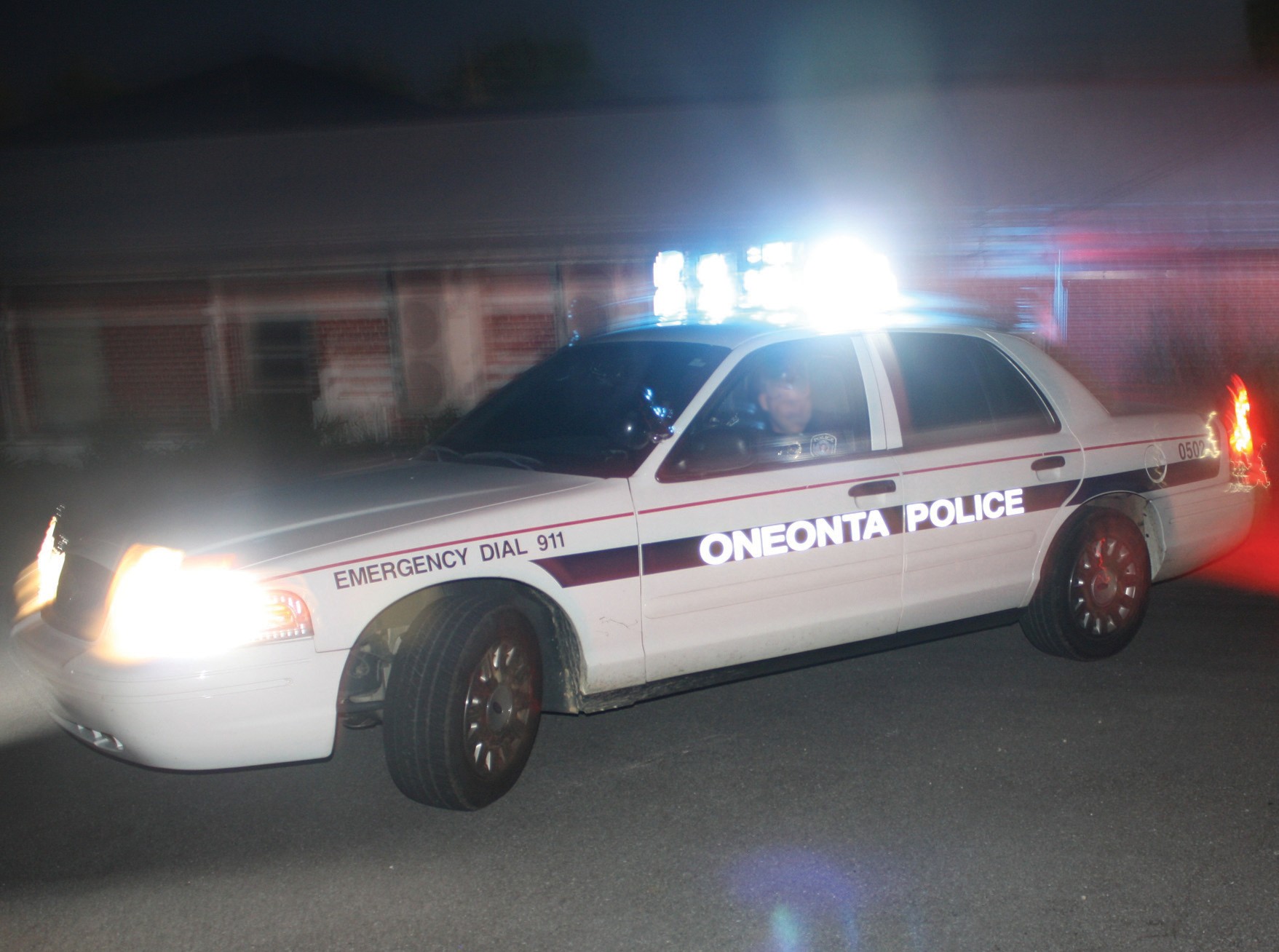 Sergeant Keith Atkinson of the Oneonta Police Department says compared to 15 years ago Oneonta is now an extremely quiet city.

Thankfully, I have never been arrested,and prior to ﻿Friday night I had no clue what happened after someone was arrested. But now, from witnessing someone being handcuffed and watching them unwillingly going through the process, I have been enlightened.

I had the privilege of riding with the Oneonta Police Department Friday night. I had no preconceived notions of what was to come. I was fairly sure what actually happens during a patrol isn’t the rough-andtumble occurrences that “Cops” portrays.

I began the evening patrol at 6 p.m. with Sergeant Keith Atkinson. He’s been with the Oneonta Police Department since 1999 and is now the supervisor for the night shift. I really wanted to understand what goes on in the mind of a policeman. What do they look for? What gets you a ticket as opposed to a warning? What do they experience on a day-to-day basis?

I basically received the same answers for all of those questions, “It depends.”

According to Atkinson, the academy teaches that the policeman should know before he exits his patrol car if the person he just pulled over is getting a ticket or not. However, he said sometimes circumstances do matter, and he can be merciful on some occasions.

While on patrol, Atkinson doesn’t really look for anything; he says he can just tell if something is out of place.

“It becomes second nature,” he said. While we patrolled through alleyways of downtown Oneonta he explained how he looks for doorknobs that look messed with. I’m not exactly sure how a doorknob is supposed to look different, but I guess that’s why I shouldn’t be a police officer.

Fun fact: Police cars have radios in them. While Atkinson explained all of the basics of patrolling to me, Rihanna was providing background music for our listening pleasure. Another sound filling the police car was a radar detector. The faster a vehicle is traveling, the higher the pitch the mph enforcer produces. Not only can it read cars coming from one mile away, it can pick up on speeds on all sides of the patrol car. So, no matter where you are, if you’re speeding, they know.

The Oneonta Police have no patrolling patterns. Unpredictability is best, according to Atkinson, and in Oneonta there are always three policemen patrolling and most of the time there are four.

As for the crime rate, Atkinson said compared to 15 years ago Oneonta is an extremely quiet city. “People are getting smarter,” he said and criminals are learning as well. Police are experiencing more white-collar crimes nowadays, and Atkinson said there are now more occurrences of criminals forging checks than breaking into houses. “Going to jail is like going to college for a criminal,” Atkinson said.

The main objective during patrol is to prevent crime and keep people safe, according to Atkinson. “We write tickets to prevent accidents,” he said. “Traffic laws are in place to keep everyone honest.”

Before handing me off to my next ride, Atkinson drove me by a house where a homicide had occurred, told me the best apartments to live in if I decided to move to Oneonta, and explained to me what roads I should not go venturing down. I can truly say I didn’t have a clue how many roads were in Oneonta. I have lived in Blount County my entire life, and I went down roads that I never knew existed. From 6 p.m. til 7 p.m. nothing too crazy occurred, but that was the only peaceful hour of the night.

My next police chauffeur was Jimmy Baldwin. He began working full time with the Oneonta Police Department in January 2011. Before finishing my first drive, Atkinson had described Baldwin as young and fiery. I can now attest Atkinson described him well. Within the first 20 minutes, the 27-year-old patrolman was serving a warrant. The intended receiver wasn’t there, but his exgirlfriend gave Baldwin five other places he could possibly be.

We cruised a while discussing previous people he had arrested and about the time he issued a “racing on the highway” ticket to a Thunderbird going 112 mph in front of Oneonta High School. We then made our first stop of the night.

Police officers seem to look for small things to pull vehicles over for. It just so happens in a lot of cases, small offenses lead to big things. This stop was one of those occasions. In my opinion, when you are driving, it might be wise to have a driver’s license. If you do not have a driver’s license, let your passenger drive. Of course, during this stop no one in the car had a valid license. I’m rather certain they should have not been on the road in the first place, but I’m guessing after Baldwin called a wrecker to tow their vehicle, they got the message.

After a few more stops that didn’t lead to much, Baldwin and I head back to upload some video. Then, a call comes around 10 p.m. about a fight at a local restaurant. We pull up and are immediately met by a witness. “He slapped her,” he says.

The altercation occurred between a wife and husband. According to her, this isn’t the first time for him to physically harm her either. Baldwin informs me that Oneonta Police have dealt with the husband before. Baldwin pleads with the wife to get a warrant on her husband considering he has left the scene. He then takes a picture of the red mark on her face from where her husband slapped her, and we return to finish uploading the video.

At 10:30 p.m. the woman calls the police back because all of her belongings are at the residence that her husband is at, and she would like an escort to that location. Then, the three officers began to consider if they can go ahead and arrest the husband for domestic violence (3rd) considering they could be in pursuit of the subject because of the small amount time that had elapsed since the occurence. Within 10 minutes they decide they have the right to make the arrest, and Baldwin will be the one arresting him.

All three policemen drive to the man’s house. After knocking twice, the man opens the door and is arrested without resisting. He gets in the back of the police car. “I’m going to jail because my wife cheated on me,” he says mockingly as we pull away from his house. He continues to claim that he hasn’t hit her. The subject then asks Baldwin his name and asks why they are arresting him. After Baldwin explains what the man’s charges are, he asks why he isn’t innocent until proven guilty. Baldwin explains this is not a court of law, and they only had to have a probable cause to make an arrest. The subject says there must be a flaw in the system and repeatedly says how unbelievable his situation is.

After making it to the jail, Baldwin pulls up to a large garage door and drives in after it opens. To our right is the entrance to the jail. Baldwin removes the subject from the vehicle, delivers him to the officers waiting inside and comes back to invite me to watch the process. As I walk through two different locked doors, the subject’s shoes are the only evidence he’s there until he walks out in fashionably bright orange pants.

He continually asks questions. “Can I go to the bathroom?” “When do I get my phone call?” “Do y’all really think I would hit my wife?” He would then go from trying to tell a joke one minute to tearing up the next.

“We didn’t dream this up,” Baldwin retorts. “We have to be called.”

The subject is then fingerprinted, and is instructed to go into the other room so he can have his picture taken. During the picturetaking process he repeatedly says how embarrassed he is. None of his questions, jokes, or statements help him out of his predicament. According to Baldwin, the subject must stay in jail a mandatory 12 hours and then after making bond must sign a conditional release stating he will not harm his wife.

After leaving the jail, we patrolled Oneonta for another hour, and then I left for home with a newfound understanding of what a night as a police officer is truly like, contrary to what television might lead you to believe.