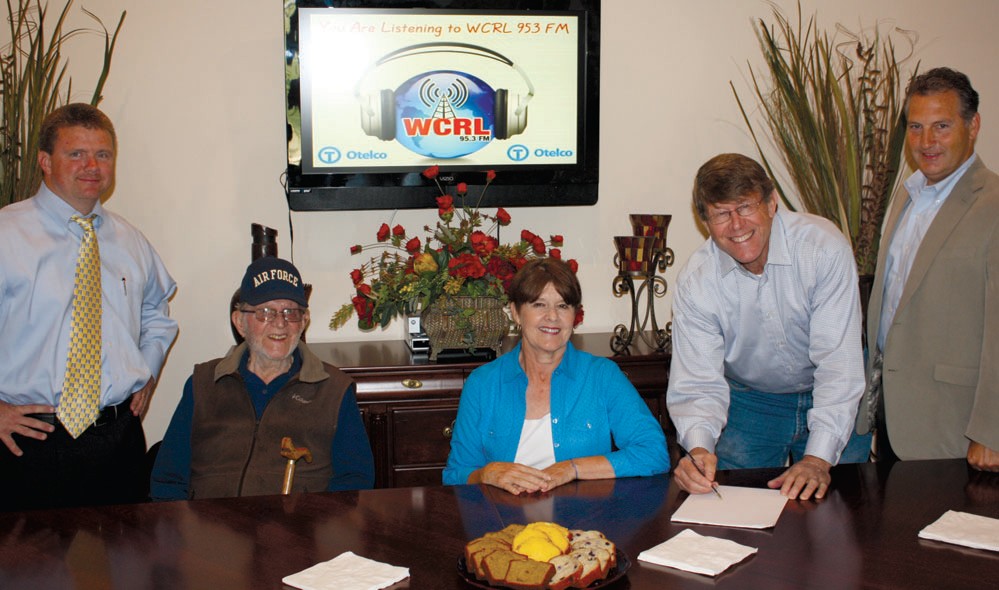 All smiles at the signing are (from left) Robbie McAlpine, L.D. Bentley, Terri Lowry, Danny Bentley and Mark Sims.

WCRL, Blount County’s only radio station, changed ownership hands last Friday after being owned by the same family for 59 years. Robbie McAlpine, of Alpine Advertising, and Mark Sims, local business owner, have purchased the radio station from the Bentley family.

McAlpine and Sims say they both find it important to keep the station locally owned and operated to maintain the local angle. The new slogan for the station will be, “Local and Loving It.”

“Mark and I both grew up and graduated from Oneonta High School, and we’re both interested in keeping local radio alive,” McAlpine said. “I think it’s something that’s dying nationally, and we’re very proud to keep it going strong in Blount County.”

No extreme changes to the station are scheduled to take place. The Swap Shop and morning show will continue as before, and Wayne Shaddix and Tim Chamblee will remain employed. Chamblee will be the on-the-ground news reporter, according to McAlpine. The new owners also look to improve the sports coverage across the county.

“We’re just tightening the station up,” McAlpine said. “It’s going to have a little bit of a different sound but nothing drastic where people are going to want to turn away.”

L.D. Bentley, the first voice to be broadcast over WCRL in 1952, was in attendance to witness the signing of the papers. Danny Bentley and Terri Lowry, the former co-owners and children of L.D., recalled and retold memories of their time with the station from their childhood until their morning show, which aired from 1978 until 2008.

The co-owners have been planning for the ownership change for a while after they realized no one else in the family wanted to continue running it.

“I’m sad in a sense, and then I’m really thankful for what it has made possible for my family throughout the years.” L.D. said.

L.D. taught his children the importance of being local, and Danny said they may have not done some things as well as others but having a local aspect to the radio station and representing Blount County was something they did well.

“Being local and immediate is a combination you don’t have in many places, and that is something we had instilled in us,” Danny said.

With McAlpine and Sims being so focused on the local angle, the Bentleys said they feel comfortable they will do a good job.

“We’ve known that Robbie has loved radio all his life, and it’s something that he’s wanted,” Lowry said. “We knew one day we’d not be the owners anymore, and we feel very good about Robbie and thankful that he wants it and will keep it local.”