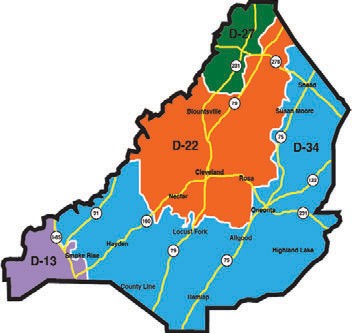 Blount County is set to become part of four separate House of Representatives districts (above). Only minor changes were made to Blount County’s two Senate districts, with Royal and a small part of the Susan Moore voting areas moving from District 17 to District 9.

Don’t overreact to the changes shown in the accompanying map. This shows Blount County’s voting districts as drawn and passed by the Alabama Legislature in the session just concluded.

But they’re not due to go into effect until the general election in November of 2014. And according to Blount County State Rep. Elwyn Thomas, who said he abstained from voting on the House redistricting plan, it may never go into effect as proposed because “this will be in court for the next two years.” The federal courts, he said, will decide on whether the boundaries shown are acceptable, and what changes, if any, are to be made. 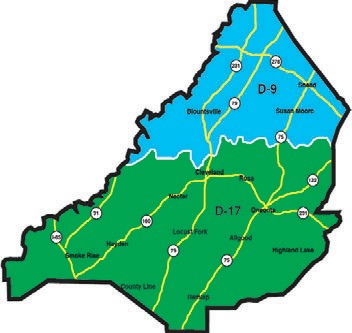 “I’m very disappointed the leadership decided to break Blount County into four parts. (It currently consists of only two House districts.) It’s gerrymandering gone wild. But even though District 34 has changed, as long as I’m in this job, I’ll represent people in all of Blount County.”

Remember: this is just the redistricting plan the Legislature drew. It’s still got to get through the courts before the boundaries actually change. This plan does not affect any aspect of this fall’s general election.