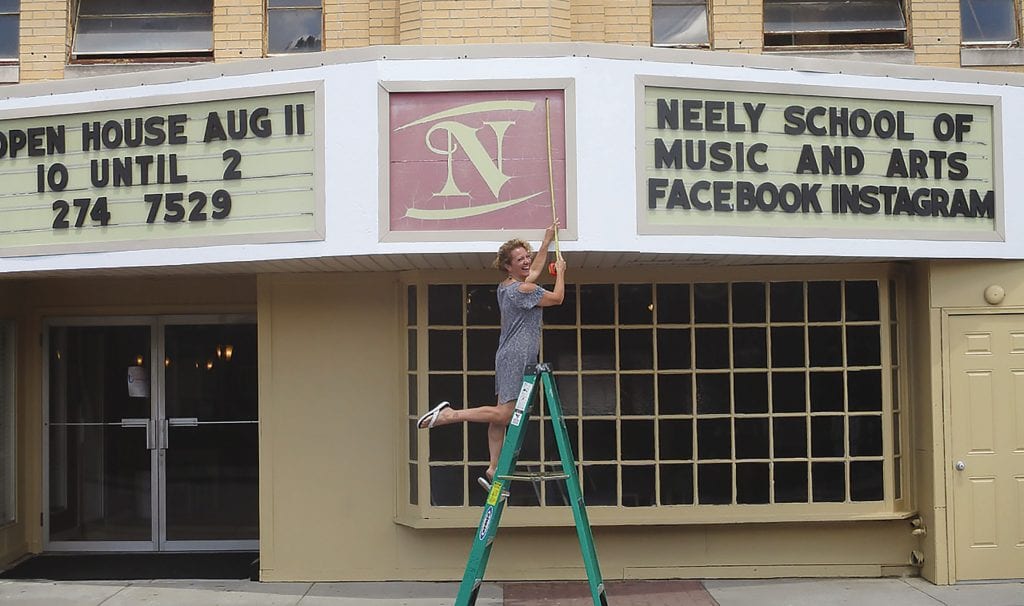 Deborah Beason works to give the Neely Theater marquee a facelift in time for the Aug. 11 open house. Meanwhile the marquee keeps on doing its job announcing what’s coming up next.

The new Neely School of Music and Arts will host a ribbon-cutting and registration day Saturday, Aug. 11, beginning at 9:30 a.m. for the ribbon cutting, and 10 a.m. to 2 p.m. for registration.

The ribbon-cutting signifies a number of things: (1) a new name – from Neely Arts Center to Neely School of Music and Arts, (2) new ownership – now under sole ownership of Deborah Beason (who has been a co-owner since the Neely’s incarnation as a music school in 2005); (3) new teachers (a dozen) – covering instrumental and vocal instruction, and new offerings in dance and martial arts; (4) a new Story and Clark vintage baby grand piano in the renovated performance venue; (5) a new energy/synergy and the Neely’s traditional innovative approach to instruction.

Saturday’s program will feature a Little Ninjas tournament with 5- to 8-year-old martial arts students at 11 a.m.; a piano recital hour beginning at noon with several intermediate and advanced piano students; drawings at intervals for door prizes for everyone who has shared the Neely’s social media posts (prizes include cool T-shirts and discounts on lessons); and a visit by Lupita’s Ice Cream truck, with a free ice cream for all registrants (including existing students who are re-registering for another year). Larger questions

Some of the larger questions about the new Neely’s role can be answered only by owner, conceptual fountainhead, and primal force Deborah Beason. For example, what are her fondest expectations for the new Neely? The answer comes after a long silence, but when it comes, it’s cogent and definitive: “Quality music and arts instruction in a positive environment, creating magical moments for students now and for the rest of their lives.”

Question: And what role does she hope for the Neely to play in the life of the community? Answer: “To be known as the place where everybody comes to develop their gifts. To be welcoming to everyone from near and far, and to foster the lifelong love of music. Music is important to whatever life you lead. People who are good at music tend to be good at everything. Whether you’re an accountant or a pharmacist, or whatever your niche is, the skills you develop in music will help you in other areas of your life.”

Q: Does she plan to expand the Neely’s student enrollment? A: “Yes. I want every room here full, and every teacher’s schedule full of students making music. I even have a figure in mind – 267 students – I don’t know where that came from, but that’s the immediate target I have in mind, and yes, that would be more than we’ve ever had before.”

Q: You mentioned long-range objectives. What would that entail? A: “At some point, I want to open up the second floor (the old Neely movie theater). Can’t you just see a Mezzanine Cafe? A Steinway recital hall? This was a movie theater, for goodness sake. How about a place for movies? There’s a stage. There could be musicals, drama. This is a theater!” Other modest facts

• The new Neely will have office hours Mondy through Friday from 2 p.m. to 6 p.m. That’s office hours for parents and others to get their questions answered by an on-duty worker, in addition to regular hours for lessons. The office will include a store where music books and other musical items can be purchased and a snack bar. Hours for music lessons are Monday, 10 a.m. to 7 p.m.; Tuesday/Thursday, 2 p.m. to 7 p.m.; Wednesday, 10 a.m. to 7 p.m.: and Friday, 2 p.m. to 6 p.m.

• Lessons offered presently include: piano, guitar, drums, bass, violin, voice, banjo, trombone, trumpet, dance/tumbling, and martial arts. That doesn’t include the free band (ensemble) jam session hosted for all comers (not just Neely students) by Beason’s son Christopher once a week – already the source of multiple episodes of both synergy and magic moments.

• Kindermusik, for preschool children starting at newborn up to seven years old, is in a class by itself. Beason said many of her students who progress to advanced proficiency in their instrument of choice began in Kindermusik. This year, she had two students who were STATE winners in the Alabama Music Teachers Association (AMTA) annual piano festival, in which performances are rigorously evaluated by professional musician/judges in a formal audition setting. Many music teachers go years on end without ever having a student winner. This year Beason had two, one in two of the three age groups judged. Both students began their journey in Kindermusik.

• Neely School of Music and Arts also registers late-blooming and adult students. That’s right – for piano lessons, or violin lessons, or voice lessons, or banjo lessons – but not for martial arts lessons – yet. (It’s on the radar.)