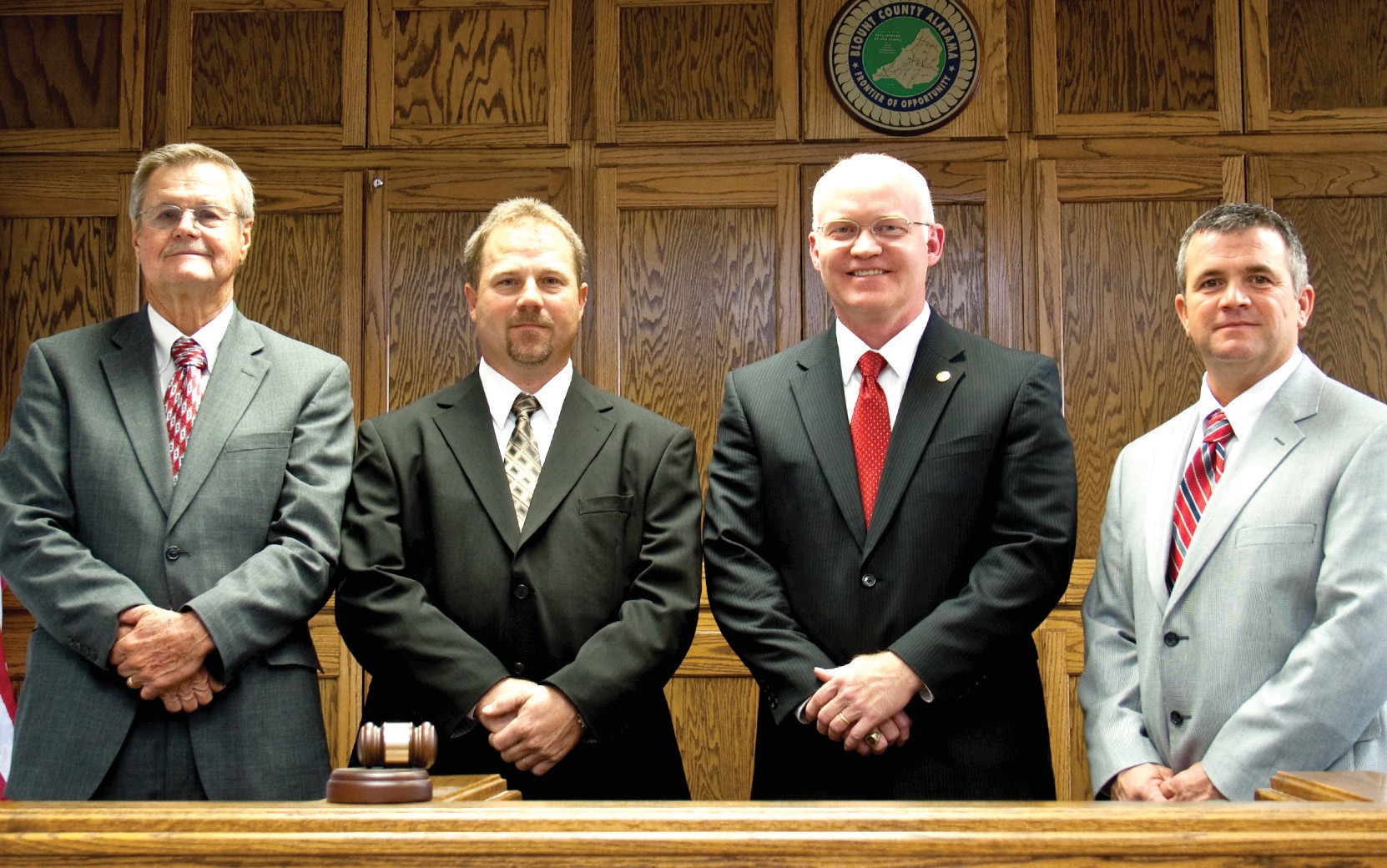 The new Blount County Commission is shown (from left): District 4’s Waymon Pitts, District 3’s Dean Calvert, Commission Chairman David Standridge, and District 1’s Allen Armstrong. Missing is District 2 Commissioner Robert Bullard (see below). He died Tuesday, the day before the swearing in of the commission which, as its senior member, he had looked forward to leading.

The new Blount County Commission, its two recent members having been sworn in an hour earlier, began its twoyear journey Wednesday toward the next electorial cycle with a low-key agenda allowing new commissioners to get acclimated to their roles without undue stress. With District 2 Commissioner Robert Bullard absent, the quorum remaining handled the short agenda of routine items quickly.

•appointed Anthony Nash to the board of directors of the Alabama Mountain Lakes Association to fill the expiring term of Cason Capps.

•approved a budget amendment for $4,225.98 to accommodate funds received from an insurance company for a transportation bus accident.

•approved a budget amendment for $74.40 to accommodate funds received from Brandon Recycling for sale of scrap metal from District 2.

•approved a budget amendment to transfer $21,500 from Tax Maintenance budget to Revenue Commission budget to allow for digitally scanning, printing, and binding records from historic plat books in danger of deterioration in county archives.

•awarded $27,979.52 bid to Terry Sligh Chevrolet for purchase of five or more vehicles for the sheriff’s department.

•approved county commission meetings to continue on the existing schedule for the coming year: business meeting on the second Monday of each month at 9 a.m.; work session on the Thursday preceding each monthly business meeting, also at 9 a.m.

1. Adding the drug ecstasy to the list of prohibited substances.

2. Lowering tolerable levels of cocaine and amphetamines, which could increase the number of positive (unacceptable) results reported.

4. Adding new definitions of what constitutes a refusal to be tested.

At the county engineer’s recommendation, the commission approved:

•resolution and agreement with Alabama Department of Transportation relinquishing segments of old state 75 (Remlap Drive) between the Blount/ Jefferson line and county 15 to Blount County for maintenance and right-of-way management.

•hiring a grassing contractor for erosion control on a small area that has been graded and reclaimed at Ingram Chert Pit in District 4; estimated cost $1500 to $2000; a much larger area remains to be reclaimed and grassed later.