New additions to the force 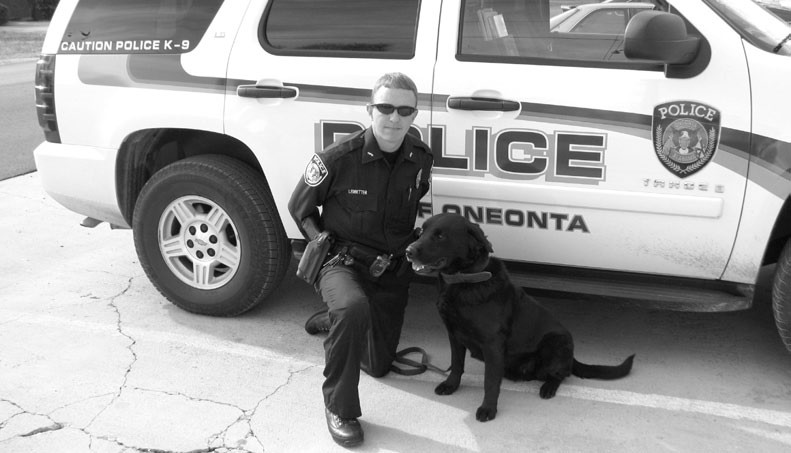 Jonathan Ledbetter and his partner, Negao

Oneonta police officer Jonathan Ledbetter has a new partner and a new vehicle. The vehicle is a 2008 Chevrolet Tahoe that previously was driven by city manager Ed Lowe. More about the vehicle later.


Ledbetter’s new partner is a bit more interesting. Negao is a 1.5-year-old, 65- pound Lab/Newfoundland mix that has been on the job for more than a month.

The dog, which was born and raised in Portugal and trained in North Carolina, has already been used a couple of times in the line of duty.

Negao was trained for use both as a drug dog and as a tracking dog by Highland Canine of Harmony, N.C. He is considered a “passive alert” dog – when he alerts to the presence of narcotics he simply sits with his nose close to the area where he picked up the scent.

Ledbetter doesn’t just work with the dog – Negao moved into Ledbetter’s home and is a part of the officer’s family now.

“I went through the training with him and we bonded and it makes for a great relationship when the dog is part of your life (as much as Negao is),” said Ledbetter.

The patrolman trained in North Carolina with Highland Canine from Nov. 23 through Dec. 18. Part of Ledbetter’s training involved learning the various commands for the dog – a chore made especially tough since all the commands are in Portuguese.

The only cost to the city was for the training – valued at about $1800 – that Ledbetter went through in North Carolina. The program, which was funded through a grant, saved the department many thousands of dollars since the dog was donated.

The department’s ongoing costs are further cut by a grant from a dog food company. The company donates one bag of dog food per month for Negao, leaving only veterinary care to be covered by the department.

Negao and Ledbetter are riding in style after the delivery of the new vehicle on Jan. 8.

The department recently reworked the interior of Lowe’s former vehicle and it has now been outfitted for use as a K-9 unit.

Two Trussville companies readied the vehicle for its new role in city law enforcement. 10-100 Electronics worked to remake the interior of the vehicle and installed the canine compartment, metal framework, jump seat, and new computer system.

Ledbetter and Negao are on patrol in Oneonta almost every day.