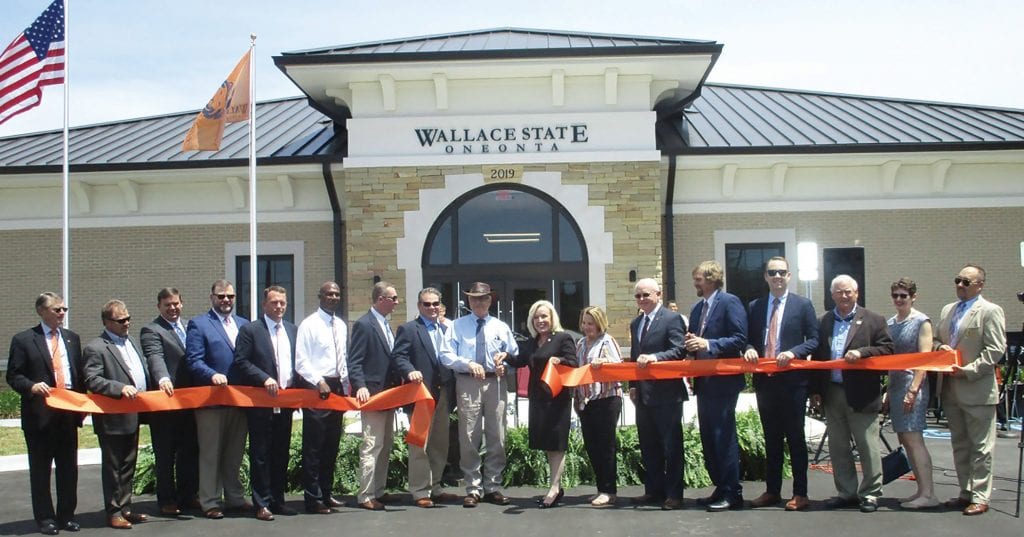 The long-awaited Wallace State Community College academic building is officially complete and ready for classes. The grand opening for summer classes was celebrated Monday with a ribbon cutting and open house at the facility. Shown in the gap between the ends of the freshly cut ribbon are three of the prime movers out of a cast of at least a score or more in bringing the Wallace State-Oneonta campus project to fruition. Holding both her end of the ribbon and the scissors used to cut it is Wallace State Community College president Vicki Karolewics. Holding the other end of the ribbon is Oneonta city manager Ed Lowe. In the middle in his signature leather fedora is Oneonta Mayor Ross Norris.

Flanking the big three are other enablers: city leaders, county leaders, a legislative leader, Blount County-Oneonta Chamber of Commerce leaders, and other Wallace State support folks, including the Wallace State Jazz Band and dance troupe – not visible in the photo, but nearby and compelling contributors to the event.

Since the initial opening of the Wallace State Oneonta Center (now the Applied Technology Center on Ala 75 just north of downtown) in May 2016, 1,064 students have attended classes there. With the expansion of facilities afforded by the new academic building, Wallace State can now offer a full program of transfer credits to four-year colleges and universities from the Oneonta center, Karolewics said.

She also announced the naming of the library/resource center in the new building for Eldridge Bynum, who worked tirelessly for years to support education in Blount County, particularly higher education, and specifically this particular project. Bynum died in July 2015, only weeks before the first public announcement of the new Oneonta campus center initiative.

The Wallace State-Oneonta partnership has been celebrated for its expansion of academic educational opportunities, its contributions to technical training and workforce development, its role as a catalyst in county-wide economic development, and its contribution to downtown revitalization. “It shows what kind of opportunities we can create in this county if we all work together,” said Norris. “I’m so proud of how we’ve all worked together. We didn’t sit around waiting for something to happen, we all got together and worked to make it happen. Days like this uplift me,” he said.