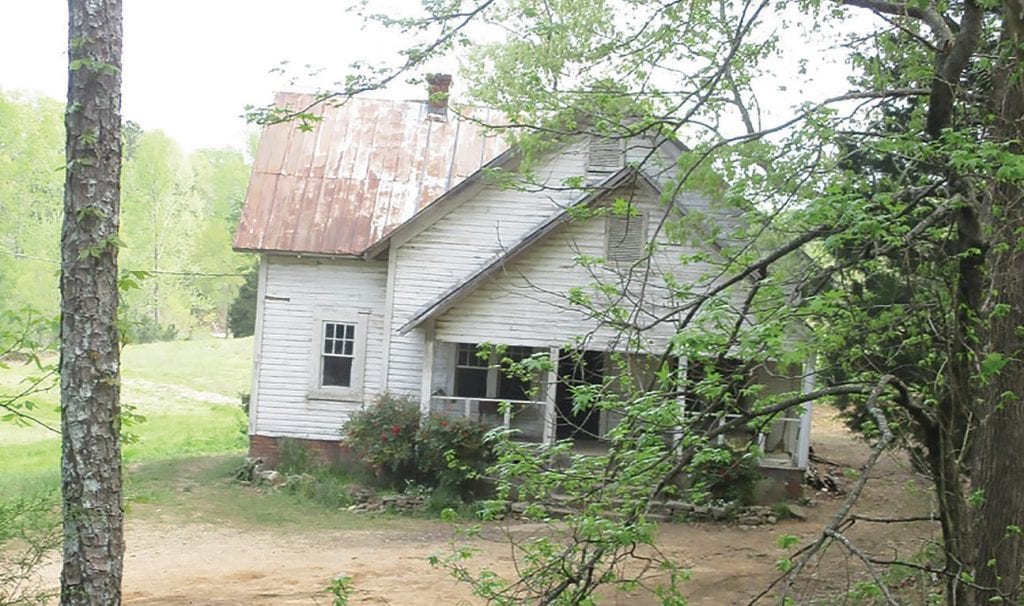 If you were driving along a back-country road and came around a curve to suddenly see a half-dozen or more sizable box-type moving trucks strung along and nearly blocking the road departing a tiny crossroads community – with a 1940s-vintage police car cocked at an angle along a driveway leading to an older, weathered frame house a little way from the crossroads – with several not-dressed-for-success folks scattered around the scene in various stages of more or less random activity, what would you think you had stumbled upon?

The beginning stages of building a movie set for “Tobacco Road?” Close, but we’re playing neither horseshoes nor hand grenades here, so a good guess gets you nowhere.

What we’re playing is where? what? who? when? and why?

The building-a-movie-set guess is spot on. That’s exactly what was happening.

It was happening Wednesday morning last week about 200 yards from downtown Taits Gap at the house in the angle formed by Taits Gap Loop and Byrd Lane. (Someone said it used to be a coal company store – maybe in roughly the same era when that vintage police car roamed the roads. It’s now a residence for a father and his two children). The scene shot in Taits Gap is a small part of the overall story, much of which was shot in Georgia, though the actual setting is further north. 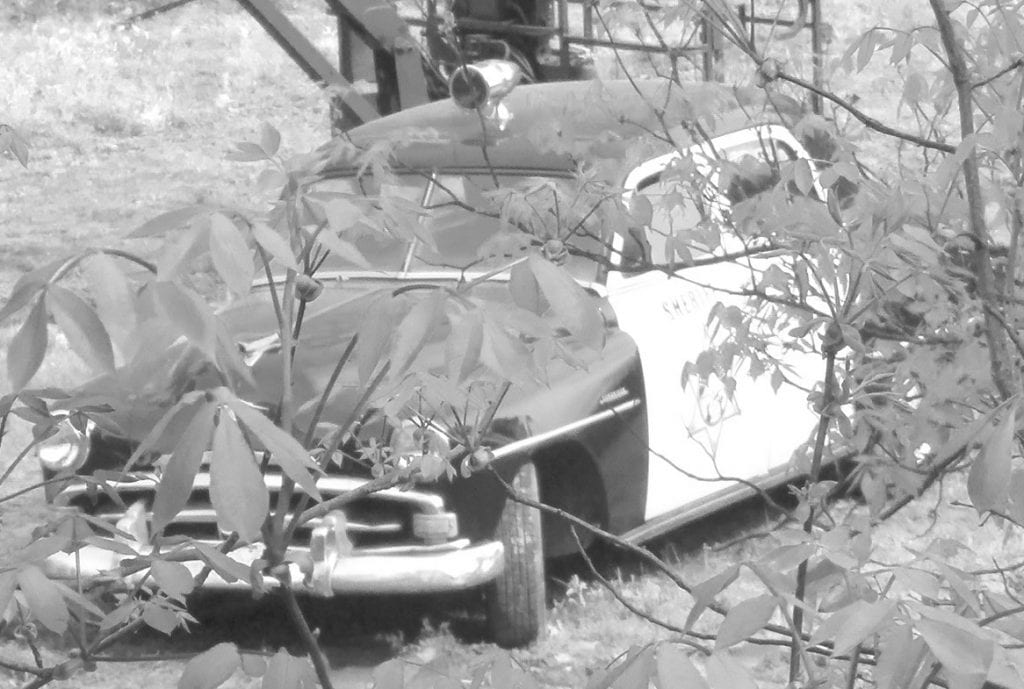 Multiple vehicles, including this 1940s-era police car, were brought in for filming.

But the movie isn’t “Tobacco Road.” It’s called “The Devil All the Time.” Aptly titled, it is a Netflix made-for-TV movie based on the 2012 book by the same title written by Donald Ray Pollock. It will be released for television in 2020.

Here’s the plot summary provided on the production company’s website.

“Set in rural southern Ohio and West Virginia, ‘The Devil All the Time’ follows a cast of compelling and bizarre characters from the end of World War II to the 1960s. There’s Willard Russell, tormented veteran of the carnage in the South Pacific, who can’t save his wife, Charlotte, from an agonizing death by cancer no matter how much sacrificial blood he pours on his ‘prayer log.’

“There’ s Carl and Sandy Henderson, a husband-and-wife team of serial killers, who troll America’s highways searching for suitable ‘models’ to photograph and exterminate.

“There’s the spider-handling preacher Roy Laferty and his crippled virtuoso guitar-playing cousin Theodore Daniels, running from the law (because Roy murdered his wife with a screwdriver through the neck so he could demonstrate God’s promise to him that he had been given the gift of raising the dead – at least in the book – who knows what the movies will do with that twist – Ed.)

“Caught in the middle of all this is Arvin Russell, Willard and Charlotte’s orphaned son, who grows up to be a good, but violent, man in his own right. Their paths intersect in the Ohio town of Knockemstiff” for the mega-violent finale. Written and directed by Antonio Campos. Starring: Tom Holland as Arvin Russell Bill Skarsgard as Willard Russell Haley Bennett as Charlotte Russell Jason Clark as Carl Henderson Riley Keough as Sandy Henderson Harry Melling as Roy Laferty

Most of the plot information was gleaned from online notes about the in-production movie, and from the book itself. Precious little from the folks on the Taits Gap set. The only language they spoke was “No comment, no photos, non-disclosure agreement.”

The production outfit’s public relations office was very helpful, however, explaining that all questions would be answered on the company’s website. Most were. The PR person did say the Taits Gap location represents a minor scene in the movie, and that they would be on site for only two days. She was relieved the newspaper article would appear after the production group had left town.

She was right. They were still fiddling with the props and setting up the scene Wednesday morning, and were gone with the wind by high noon Friday, leaving only the elderly police car behind as evidence anything unusual had happened there.