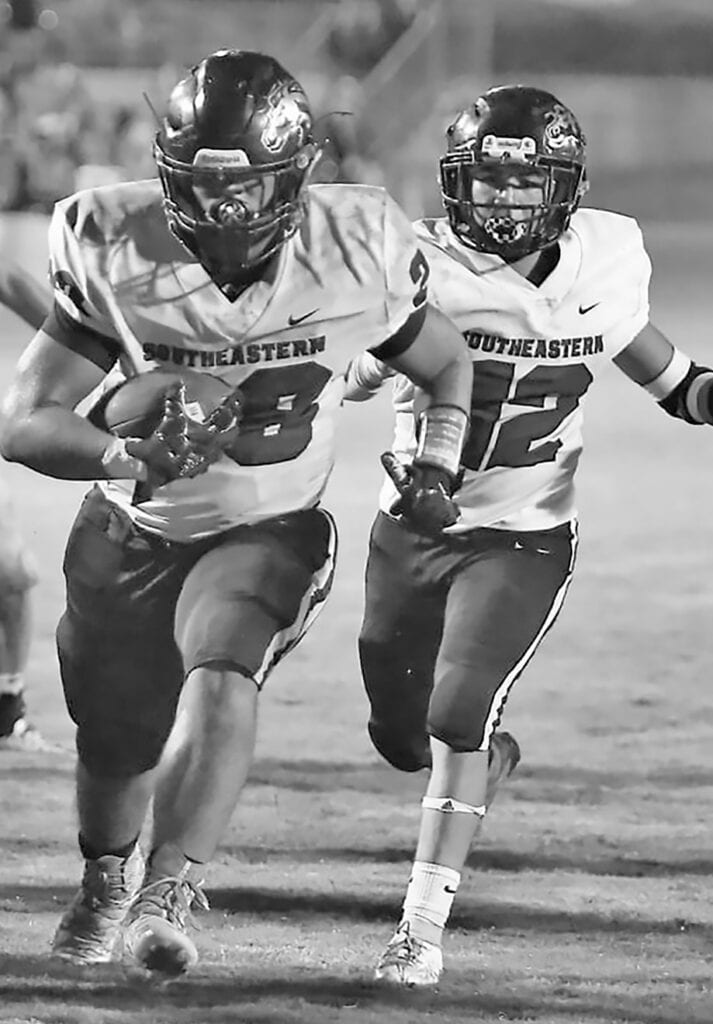 The Southeastern Mustangs traveled to Oak Grove last Friday running over the Tigers for a 31-6 win. Southeastern’s offense was firing on all cylinders with 122 yards through the air and 210 on the ground for a total of 332 yards on the night. The Mustang defense was relentless at the line of scrimmage allowing just 15 rushing yards with four safeties and eight tackles for loss. Oak Grove didn’t fare much better through the air with only 93 yards.

Trent Carpenter got the Mustangs on the board in the first quarter with a 79 yard pass to Brody Dobbins. Kevin Arzate’s extra point gave them the early 7-0 advantage. In the second quarter, Noah McCray pushed his way into the end zone for a 2-yard score. The extra point made it 14-0. Later in the quarter, Arzate’s 27-yard field goal gave the Mustangs a 17-0 lead going into the half.

Southeastern kept pounding the ball in the third. Kevin Juhola broke through the line running in for the third Mustang TD. Another good extra point made it 24-0.

The Mustangs didn’t let up in the fourth. The defense didn’t allow any more points, while the offense added six more. Carpenter found Cole Williams this time for a 10-yard touchdown. The extra point gave them 31 points and their fourth win of the season.

Carpenter led the offense with 177 total yards. Passing, he was 5-for-16 for 118 yards, two touchdowns, and one interception. He added 53 yards on the ground and caught a McCray pass for 6 yards. McCray rushed for 140 yards scoring once, while Juhola ended the night with 8 yards rushing and one touchdown. Dobbins led the receivers with 79 yards and a score. Kevin Arzate had 22 yards while Williams’ one reception was good for 10 yards and a touchdown.

The defense was led by Chrisitan Alvarado’s six tackles, one for a loss. Juhola ended the night with two sacks and four tackles for loss. Justin Pendleton, Kane Leggett, and Jordan Jackson had four tackles apiece with Jackson recording two sacks and two tackles for a loss. McCray recorded three tackles with one for a loss; Arzate had two; and BJ Gengler and Walter Readus had one. Readus also recovered a fumble.

Friday night, the 4-2 Cleveland Panthers head to Southeastern in a 2A Region 6 matchup. The county rivals, both 2-1 in region play, feature two of the county’s most explosive quarterbacks in Carpenter and Cleveland’s Logan Washburn. Carpenter has 806 total yards while Washburn has racked up 1,103. Both teams have put up 145 points with Southeastern only giving up 50 points. Cleveland has allowed 111. Kickoff is at 7 p.m.