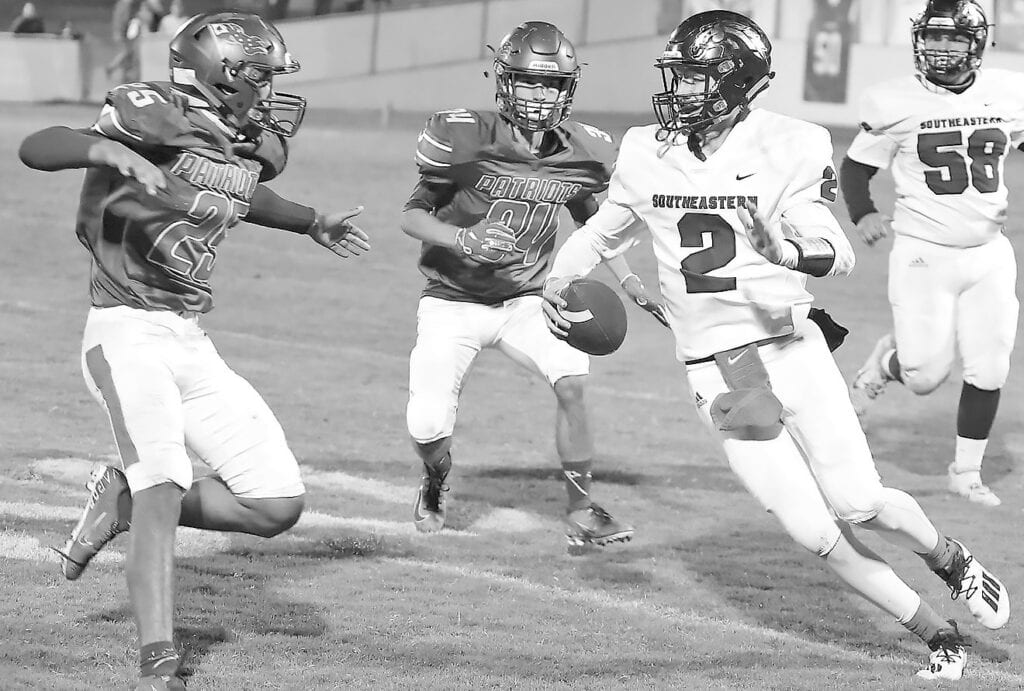 The Southeastern Mustangs and West End Patriots put on a show Friday in a game that featured two high-powered offenses. The game was ultimately decided by a field goal giving Southeastern its sixth win of the season. Kevin Arzate’s 25-yard kick sailed through the uprights late in the fourth putting the Mustangs on top for good at 31-28.

Jacorreon Pendleton got the Mustangs going in the first quarter with his 16-yard run into the end zone. After Arzate’s kick, it was 7-0 and that’s where it stayed until West End found the end zone in the second quarter. A failed two-point conversion attempt gave Southeastern a one-point advantage. But, the Patriot’s weren’t done. They scored again, this time on a 44-yard pass and converted the two-point play making it 14-7. Before the end of the half, Noah McCray got through the line for a 28-yard run taking it all the way for the TD. Arzate missed the kick. It was 13-14 heading to halftime.

The Patriots got on the board first in the second half on a 14-yard completion and another successful two-point conversion giving them a 22-13 advantage. But the Mustangs kept fighting back. Noah McCray broke free on a 28-yard run for his second touchdown of the night. Arzate’s kick was good and the Mustangs were down by just two at the end of three.

McCray wasn’t done either. He found the end zone once more, this time on a 10-yard run. The Mustangs converted the two-point play making it 28-22 and putting them back in the lead for the first time since the second quarter. West End kept fighting, eventually finding the end zone one more time. The Mustang defense was ready for the two-point play keeping them out of the end zone and keeping the score tied at 28. Then it was Arzate’s turn. His three points were all they needed to finish off the Patriots on a wild night in Walnut Grove.

With 174 yards on 17 carries and three touchdowns, McCray led the Mustang offensive charge. Jacorreon Pendleton had 110 yards on 12 carries for one score. Trent Carpenter finished the night with five completions on 10 attempts for 47 yards plus another 30 on the ground. Brody Dobbins was Carpenter’s leading receiver with 33 yards on two receptions.

The win takes Southeastern to 6-2 on the season, 4-2 in region play. This Friday they host the Spring Garden Panthers who currently hold the top spot in Region 6 with a perfect 6-0 in region play.