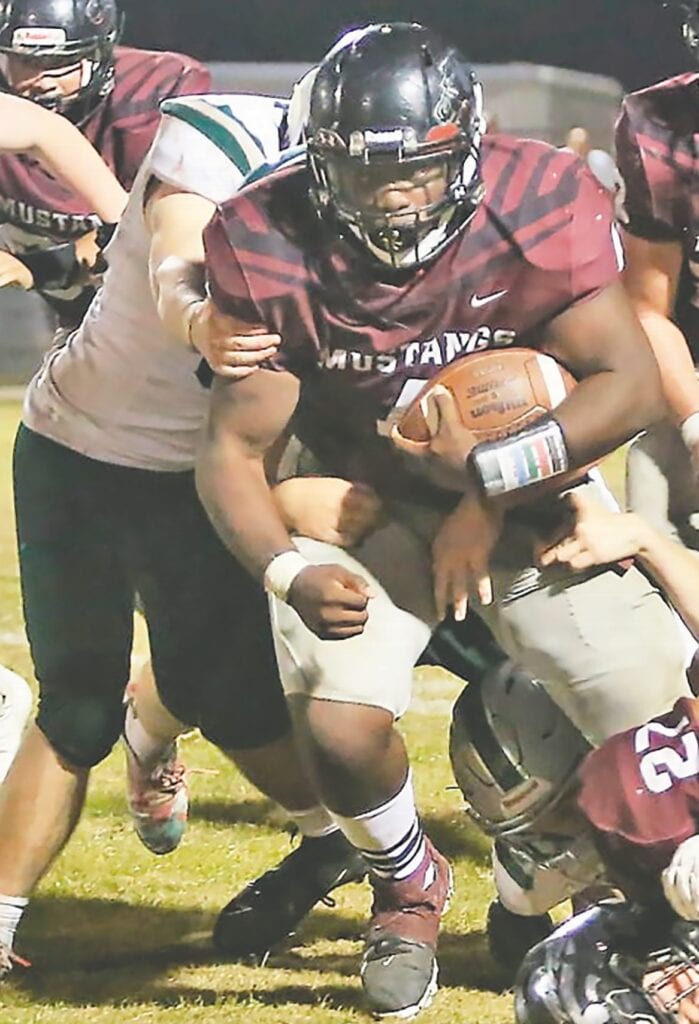 For the second straight week, the Southeastern Mustangs hosted an in-county, region rival. Thursday’s contest with the Locust Fork Hornets was hard fought, but the Mustangs held on for a 28-21 victory earning their fifth win of the season and their third in region play. The Mustang offense racked up 382 yards, 291 of those yards coming from a strong rushing attack. For the Hornets, they ended the night with 263 yards with 188 coming through the air.

Kevin Juhola got Southeastern on the board first pushing his way into the end zone from 1-yard out. Kevin Arzate hit the extra point, and the Mustangs were on top 7-0. In the second quarter, the Mustangs dialed up the offense scoring 21 more before the end of the first half. Trent Carpenter broke through the line and took off downfield for 65 yards and the Mustangs’ second touchdown. Arzate’s second kick was good for the 14-0 lead. Next up for the Mustangs was Jacorreon Pendleton, whose 4-yard TD run along with Arzate’s extra point added 7 more to the Mustangs’ lead. 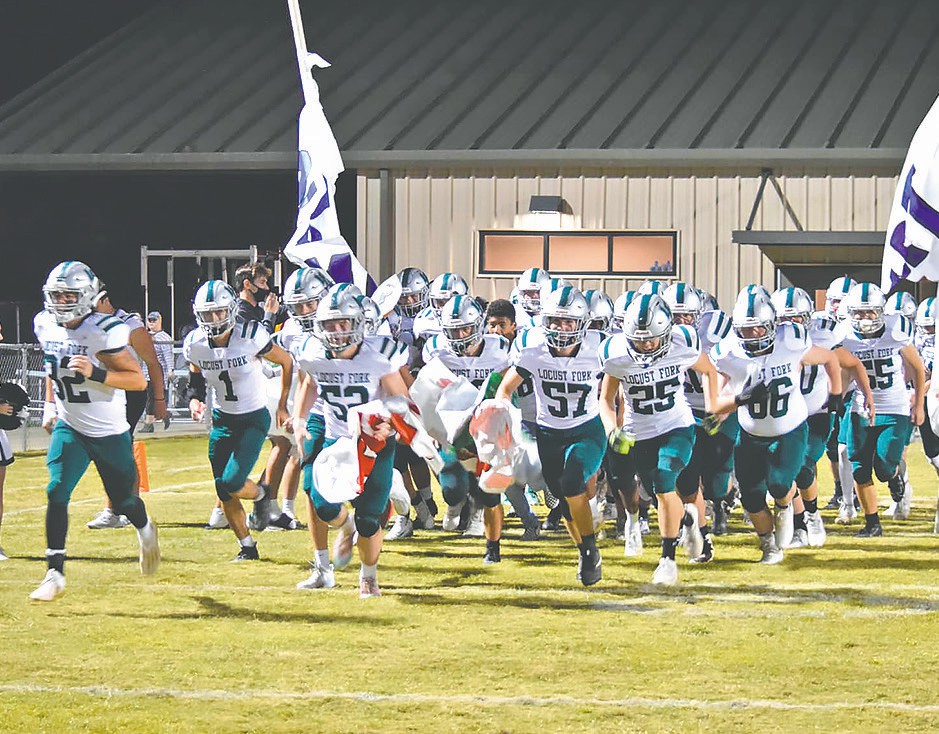 The Hornets, however, were determined to get the ball across the goal line before they headed to the locker room. With just 0:57 left in the half, Lukas Huber hit Michael Mullins for 23 yards putting the Hornets on the scoreboard. The missed extra point kept the score 21-6. But, Southeastern had no intention of sitting on the ball with under a minute to play. Before the buzzer sounded, Brody Dobbins hauled in a 42-yard pass from Carpenter scoring the Mustangs’ fourth touchdown of the first half. Arzate’s fourth successful extra point attempt gave Southeastern a 28-6 advantage.

Neither team scored in the third as both defenses kept their opposition in check. But in the fourth, the Hornet offense stepped up their game. Their second touchdown came on an 8-yard QB scramble. Jalon Boatright ran it in adding 2 points to Huber’s 6 and cutting Southeastern’s lead to 28-14. As time was winding down, Huber and Boatright teamed up once more to cut the lead by seven more. Boatright caught Huber’s 45-yard pass for the TD and Mondragon added the extra point leaving them only down by 7. With only 0:28 left on the game clock, they couldn’t get the ball back and fell to the Mustangs 21-28. 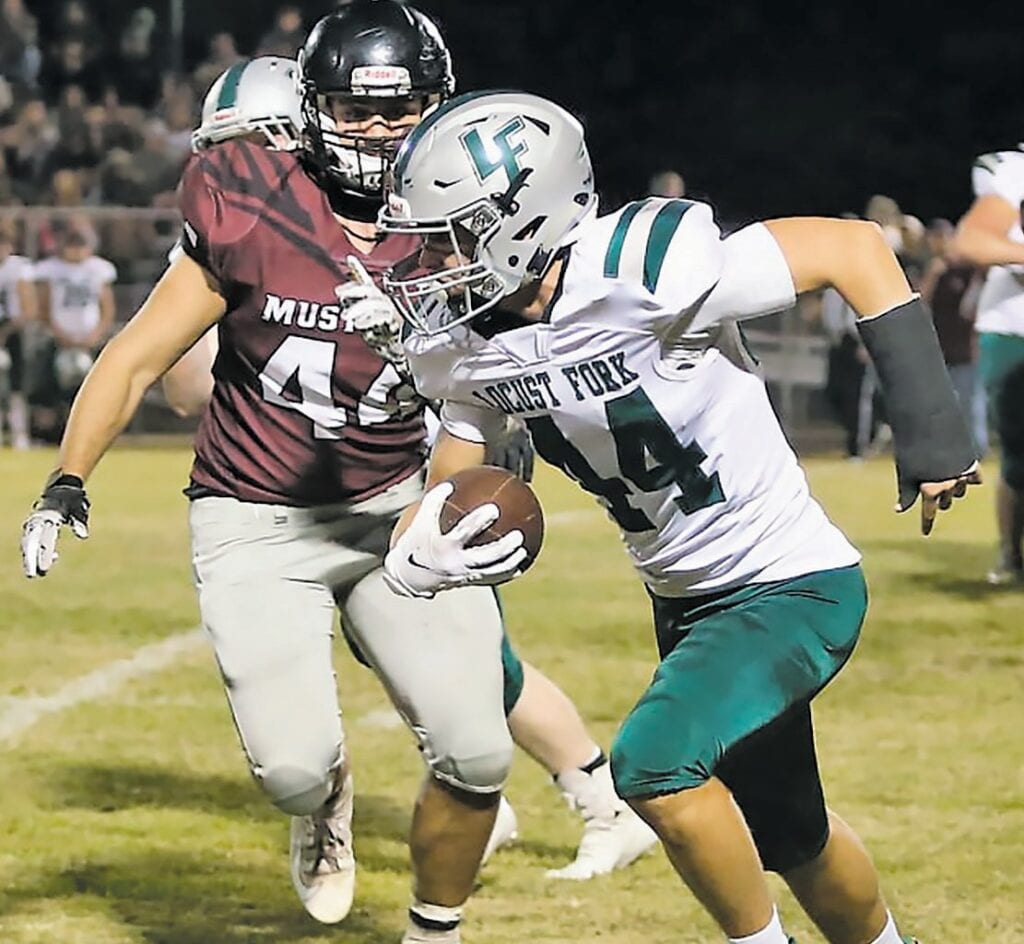 Carpenter finished the night with 221 total yards. He went 4-for-11 with 91 yards and a passing touchdown. He gained 130 yards on the ground with another touchdown. Noah McCray had a big night on the ground, too, finishing with 108 yards. Pendleton rushed for 50 yards and Juhola ran for 19. Both had a touchdown. Dobbins, the recipient of Carpenter’s touchdown toss ended with 47 receiving yards while Fernando Chavez caught the ball for 44.

For the Hornets, Huber threw for 203 yards, two touchdowns, and two interceptions. The Hornet defense kept pushing the Mustangs back. After giving up 28 points in the first half, they kept Southeastern out of the end zone for the rest of the night.

Cole Williams led Southeastern’s defensive effort with 12 tackles (one for loss). Justin Pendleton and Jordan Jackson finished the night with six tackles apiece; Jackson also recorded a sack and a tackle for loss. Dobbins had five tackles with one for a loss. Ben Hall was on the receiving end of both interceptions.